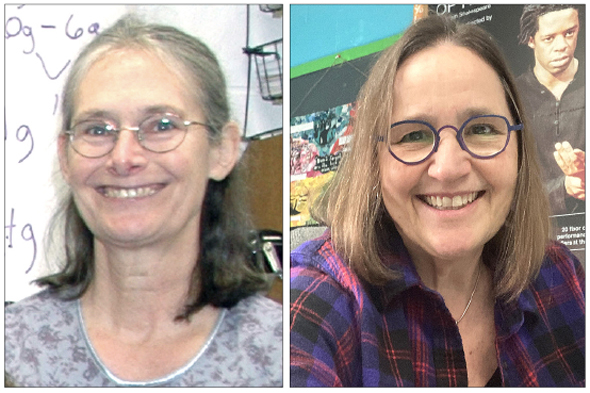 This is the first of a two-part story.

As the 2020–21 school year — a unique one by any standard — came to a close, so did the years of service provided by five educators in the local school system. These educators spoke to the News and reflected on their careers and their plans for the future; this is the first in a two-part story covering those conversations.

By the time Peg Morgan spoke to the News on the last day of the school year for teachers, she had already cleaned out her third-grade classroom.

“I’ve got most of it packed into my car,” she said, speaking via phone from her empty classroom.

The items she packed up represent 21 years of her teaching career, during which she led swaths of third and fourth graders at Mills Lawn along the path to learning — or, more accurately, helped them lead themselves. Morgan described her pedagogical approach over the years, saying that children are “active learners.”

“So the teacher creates opportunities for students to approach learning,” she said.

Morgan’s approach is informed by her own educational background in Montessori education, which focuses on child-led learning. After receiving her bachelor’s degree in special education from Wright State and her master’s in Montessori education from Xavier University in Cincinnati, Morgan began her career teaching in a public Montessori institution in Dayton. She next taught upper elementary — ages 9 to 12 — in a public Montessori school in Seattle, Wash., but returned to the Miami Valley after several years to help care for her aging parents.

Morgan said that, after returning, she debated between pursuing a position in Centerville schools or in Yellow Springs, but ultimately chose the village’s school system because she thought it would more effectively help her transition to a “traditional elementary experience.”

“With my Montessori background — the teacher as a guide versus the teacher as the leader — I thought I’d be more comfortable with the pedagogical philosophy of the YS school district,” she said.  “And it was true.”

Though she stressed that she did not employ actual Montessori methods in the classroom at Mills Lawn, Morgan said that she was able to imbue her teaching with some of the same sensibilities.

“I always stayed true to the standards, but even before project-based learning, I was given the opportunity to create extensions to the standard curriculum,” she said.

Morgan said that some of her favorite such extensions involved connecting her young students to the larger community. For example, she cited a project wherein local government figures would visit third graders to speak about the government and their functions within it. Mayor Pam Conine has been a repeat presence in Morgan’s classroom, delivering what Morgan called a “wonderful piece about the Constitution.” Other favorite projects included working with Susan Jennings of Agraria to guide students in learning about soil health and teaching geometry by asking students to search for and take photos of quadrilaterals in nature and architecture.

“The ability to work like this with students in a community? How privileged I was!” she said.

Morgan said maintaining a sense of community in her classroom has been more difficult during the pandemic, saying that she’s “exhausted” — though she added that this was par for the course among her colleagues.

She also said that she considers herself a “natural learner,” and that, all things considered, she adapted to the changes over the last 15 months fairly well, reiterating that her focus was on “following the students.” Meanwhile, at home, Morgan was dealing with the loss of her father, who died in February.

“It’s been a year of great change — but when one door is closed, many doors are opened,” she said.

To that end, Morgan said this year felt like the right time to make her exit from Mills Lawn, though she said her reasons for doing so are still a little nebulous, even to her.

“My thinking is still in process when it comes to that — I’m still kind of growing,” she said. “It feels like a good time to explore other things to do.”

First on her docket, she said, will be taking care of things in her personal sphere that were sidelined as she focused all her energy on taking care of her father and teaching.

“I’m going to learn how to sleep again and nest a little bit and kind of see where my spirit guides me,” she added.

Though she’s looking forward to moving ahead into the unknown, Morgan said she will certainly miss being in the classroom, particularly the community-building aspect of that classroom that has so defined her career.

“There have been some connections that I’ve so enjoyed,” she added. “I’m leaving with wonderful memories.”

Desiree Nickell told the News that she decided on her career path in ninth grade, when her high school English teacher taught the Tennessee Williams play “The Glass Menagerie.”

“He just did it in a way that absolutely entranced me,” she said via phone. “I decided then that I was going to be an English teacher.”

Nickell eventually made good on that decision — she is retiring after 17 years of teaching YSHS students — though her career took a few other turns first. After completing both her bachelor’s and master’s degrees in English, she taught at Bowling Green University and then Wright State University. She then moved to working as the executive director of the Miami Valley Literacy Council, a Dayton nonprofit promoting childhood and adult literacy, GED completion and citizenship courses; the organization closed in 2012.

“I worked in adult literacy, and I really loved it,” Nickell said. “But after eight years, I took a couple of years off — and then I decided I was going to do what I originally wanted to do, which was teach high school.”

Nickell received her teaching certification from Antioch University McGregor, and spent the next eight years teaching at Meadowdale High School in Dayton. By this time, Nickell and her husband, Ellis Jacobs, had already moved to the village, so it was only natural for Nickell to pursue a position in the local high school when it became available in 2004.

At YSHS, Nickell said, she and her colleagues were free to create their own curricula, including introducing students to a new Shakespeare work each year — “I love teaching Shakespeare,” she said; a freshman introduction to “the hero’s journey” through examining Homer’s “The Odyssey” and other more contemporary works like “The Hobbit” and “The Hunger Games”; and, yes, some Tennessee Williams — namely, “A Streetcar Named Desire.”

“I don’t know why, but I never taught ‘The Glass Menagerie,’” Nickell said.

Nickell has long known that this year would be her last at YSHS — she had always planned to retire at age 65. Folks in her personal sphere, she said, have more than once told her they’re sorry that her final year was overshadowed by the restrictions of COVID-19 — but Nickell feels differently.

“I wouldn’t have missed this year for anything!” she said. “It was like a whole new ballgame — all these things I hadn’t done before — and I found that really energizing and stimulating. It was phenomenal.”

Nickell leaves YSHS with a certain amount of fulfillment in terms of the legacy she’s leaving after nearly two decades at the school. In particular, she pointed to the AP seminar course for juniors — a course that developed late in her career — as a point of pride. The class focuses on critical thinking, critical reading and argumentative writing, and highlights methods by which to identify both credible and noncredible sources in news media and research materials.

“Being able to navigate in our contemporary media landscape is pretty important,” she said. “You can’t have as much fun, I guess, as you could in a literature course — but I am confident every one of the students could be successful doing college-level writing after [AP seminar].”

She also noted her time as advisor of the Gay Straight Alliance group on campus, a position she originated after being approached by community members to start a local chapter of the club led by LGBTQ+ and allied students.

“The work we did was gratifying, and I’m really proud of it — and GSA will thrive after I’m gone,” she said.

Nickell said she will miss her students “terribly,” as well as her colleagues — “I never worked with a better bunch of folks,” she said. Nevertheless, she’s looking forward to her retirement, and plans to enjoy each day as it comes — biking and walking, cooking, gardening, visiting friends and spending time with her father, Jack Nickell, who also lives in the village.

“And reading!” Nickell said. “Most of what I’ve read over the years have been books that I’ve taught, so I’ve got stacks and stacks of books just waiting for me to read them.”

Nickell also said she’s considering doing some volunteer work down the road, with organizations like Planned Parenthood and the League of Women Voters up for consideration — but at the moment, she’s happy being decidedly undecided.

“I’m exploring lots of different things, but mainly I just want to enjoy my life,” she said. “And even though I really did enjoy reading all my students’ papers over the years, I’m happy I don’t have to grade anymore ever again in my life!”