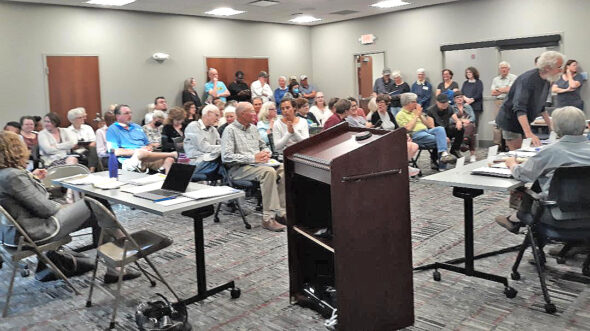 About 75 people filled the meeting room at the new firehouse on Wednesday, June 23, in anticipation of a scheduled hearing by the Miami Township Board of Zoning Appeals concerning the Agraria farm property on Dayton-YS Road, just west of the village. A similar number returned the following Wednesday after the hearing was continued for a week after a court stenographer hired by Agraria failed to appear. (Photo by Carol Simmons)

Board of Zoning Appeals says no to Agraria barn rental

School group visits are OK. Renting out a historic barn for weddings and other social or community events is not. Setting up a farm store or stand is fine. Renting a conference room to other groups is questionable.

The farm known as the Agraria Center for Regenerative Practice, just west of Yellow Springs, is coming up against limits on the range of activities center leaders envision for the 128-acre property off Dayton-YS Road.

At issue is the way Miami Township zoning officials interpret the state’s relatively new allowance for farm-based activities that fall under the so-called “agritourism” umbrella. Agraria leaders also are learning that some of their farming neighbors are less enthusiastic about the center’s activities than villagers who actively support the venture, which opened in fall 2017.

In a three-and-a-half-hour hearing Wednesday, June 30, the Miami Township Board of Zoning Appeals, or BZA, considered testimony from a range of viewpoints specific to two Agraria requests that had been denied by Township Zoning Inspector Richard Zopf. Weighing in were Agraria board members and staff, agriculturally focused academics, the Yellow Springs Village manager and township farm and property owners, including internationally known comedian Dave Chappelle.

According to Ohio Revised Code, legislation adopted in 2016 defines agritourism as “an agriculturally related educational, entertainment, historic, cultural, or recreational activity, including you-pick operations or farm markets, conducted on a farm that allows or invites members of the general public to observe, participate in, or enjoy that activity.”

As reported at the time, the purpose of the legislation was to increase revenue opportunities for farming enterprises across the state, especially smaller family operations.

For Zopf, the phrase “agriculturally related” bears the primary weight in parsing the legislation.

In opening the June 30 hearing, Zopf said the agricultural nature of a proposed activity had been his main consideration in deliberating four separate requests from Agraria, two of which he’d approved.

Allowed were Agraria’s desire to present “agricultural activities for all ages” as well as its plan to set up a farm store or stand. Denied, however, were Agraria’s requests to rent its barn for various social and community activities and to rent its office conference room for meetings, workshops and day-long retreats.

Agraria’s challenge to Zopf’s two rejections prompted the BZA hearing. Originally scheduled Wednesday, June 23, the hearing was continued to the next week when a professional court stenographer hired by Agraria did not show up. About 75 people packed the meeting room adjacent to the Township office in the new fire station, only to  leave disappointed after the hearing, having been called to order at 7:15 p.m., was immediately adjourned following the board’s vote to continue June 30. A similar number returned the next Wednesday, when a sign setting the room capacity at 67 left some attenders watching through the hall door and windows.

The five-member BZA heard testimony for about two-and-a-half hours before retreating into an executive session for its deliberations. They returned to the public format an hour later, voting unanimously to uphold Zopf’s decision against renting the Agraria barn, but allowing limited rental — no more than 12 times a year — of the office conference room.

Zopf noted that township zoning is legislated by the state, while municipalities, such as the Village, have more flexibility with zoning regulations through “home rule.”

“One thing we can’t do is regulate agriculture,” he said of township zoning boards.

“Zoning applies to land, not to the owner of the land,” he continued. “It makes no difference at all who owns the land.” A finding in favor of renting out the Agraria barn would extend to all barns in the township, he said,

His opinion about the worthiness of an owner or the owner’s mission plays no role, Zopf asserted.

“I can’t say whether this person is more deserving than another. … I administer the code,” he said, adding that there are three ways he comes to a decision. He reads what the Ohio Revised Code has to say; he looks at precedent through related court rulings; and he takes into account the goals of the township’s comprehensive land use plan, which calls for Miami Township “to remain rural and agricultural.”

That’s not to say that there aren’t gray areas, he added.

“Sometimes the zoning is very clear. Other times it’s less clear. It’s my job to interpret the code and apply it.” The state’s code concerning agritourism is less clear, he added, which leaves his decisions open to challenge. That’s where the BZA comes in.

“The BZA is our [zoning] court, our judicial branch,” Zopf said. “It’s not a trial, but they rule when there’s a question.”

While the turnout at the hearing was overwhelmingly supportive of Agraria’s activities, more than half a dozen farming neighbors attended in opposition, with three rising to speak and several others angrily challenging some of the positive testimony from their seats. Neighbors along Huston Road, on the southwest side of the property, were most vocal in their concerns.

Gregory Lind testified that he appreciates Agraria’s educational mission, but he has an issue with a nonprofit organization charging money for the use of its resources.

“I’m fully in agreement with what Agraria’s trying to do with youth,” Lind said. But as “a 501(c)(3) company … they should not charge money.”

Meanwhile, “they are ignoring the needs of the neighbors,” he asserted, citing an increase in local traffic and the inclusion of alcohol at community events as problems.

He also wondered how far the definition of agritourism could be stretched.

Valerie Hoagland-Scarfpin spoke about unwanted people coming onto her property, walking through the grounds and causing damage. She testified that the temporary placement of a shipping container on Agraria’s Huston Road side created an eyesore, and that there is “a stench,” like the smell of manure, coming from the property.

Dan Cooper said he has lived on Huston Road since 1983.

“We moved to the country to keep it in the country,” Cooper said, suggesting that Agraria’s activities didn’t reflect the rural lifestyle of the area.

“I urge you to take the country people who are living there into consideration,” he said.

Locally based attorney Laura Curliss, who also serves on the Yellow Springs Village Council, represented Agraria at the hearing in a legal capacity, bringing forward a slate of people to speak on the nonprofit’s behalf as well as presenting a collection of written statements and other support materials.

Curliss echoed Zopf in describing the state’s agritourism legislation as less than clear, but she said the lack of clarity led her to believe a broad interpretation is possible and appropriate.

She stressed that Agraria, which has conservation easements on the property, has “a commitment to protect the land.”

George Bieri, a township resident and the retired land manager at Glen Helen Nature Preserve, spoke favorably of Agraria’s “integrity” and its overall agricultural vision, which he said counters the “extremely harmful” effects of industrial agriculture. He also noted that the barn “is not a party barn,” and activites there support the mission.

Donna Haller, an intervention specialist at the high school and the founder and executive director of the local VIP mentoring program, testified to the benefit of the hands-on learning experiences that youth encounter at Agraria.

“Just being on the farm is good for these kids,” she said.

Village Manager Josué Salmerón testified that “Agraria is a key to economic development” in the township, of which the village is a part. He also noted that the property offers access to agricultural education and benefits to “everyone of different cultures and classes.”

Steve Wirrig, who lives in town and owns property just north of the village, spoke about his negative experiences last summer dealing with township zoning rules related to hosting performances by Dave Chappelle and his entertainment friends at the Wirrig family’s pavilion.

“There’s no avenue to engage,” he said, in terms of expanding zoning regulations. He noted that up-to-date land use documents are difficult to obtain, a situation echoed elsewhere during the hearing as several speakers, including Curliss, were informed that they were referring to obsolete information.

Wirrig said more discussions about land use is needed. “I feel strongly as a Miami Township resident that we need to find alternative ways to use the land.”

Chappelle stood to testify in agreement with Wirrig, asserting that the shows presented on the Wirrig property were not only unique, but also historical, while at the same time they provided jobs to people amid the pandemic and brought revenue into the area.

“By tolerating these events you were able to make a difference in this community,” he said.

The BZA’s decision against Agraria’s rental of the farm’s barn is disappointing, Agraria Executive Director Susan Jennings said this week.

The income generated would have gone toward supporting its larger mission, Jennings said.

“Nonprofits [like Agraria] are really working hard to find earned income streams so they’re not totally dependent on grants and donations,” she said. “The more we can [be self-sufficient], the more we can give back to the community,” she added. “We always saw the barn as a community space; in that respect, [the decision] was very disappointing.”

An outgrowth of the Arthur Morgan Institute for Community Solutions, founded by Morgan in 1940 as Community Service Inc., Agraria defines itself as an educational and research center focused on exploring and demonstrating regenerative practices at multiple levels, including environmental, economic, psychological, social and pertaining to human health and well-being.

The center supports a staff of about 25, including interns and AmeriCorps Vista workers, according to Jennings. In addition to partnering with area schools in hosting hands-on field trips, Agraria’s own naturalist-led Nature School offers a range of outdoor education opportunities for all ages. The property also serves as a field site for area researchers, and is currently partnering with The Nature Conservancy on the restoration of Jacoby Creek. The center also rents out acreage to farmers interested in exploring regenerative practices.

Jennings said the center’s board hasn’t decided if or how it will challenge the BZA’s decision. Some options include seeking a one-year zoning variance or taking the matter to the courts.

She said the BZA decision won’t have an immediate effect on Agraria’s plans, as the barn is currently being renovated and wouldn’t be available for rental until late summer or early fall.

In the meantime, an outpouring of community support has been gratifying, she said, noting that Agraria had received “lots of letters and emails,” in addition to the voices of support expressed at the June 30 hearing.

Jennings said she had not been previously aware of the depth of feeling among neighbors, and that the board and staff have begun to work on addressing their concerns.