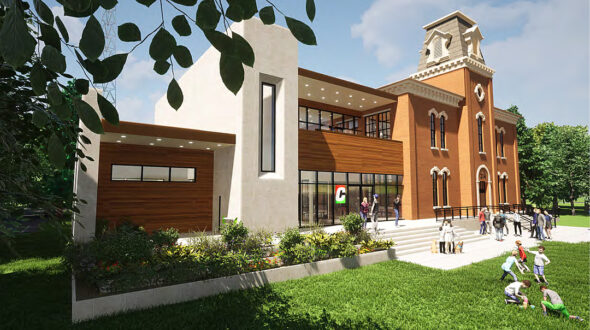 Shown above is the west side view and rendering of the design plan for the renovation of and addition to the Union School House, with new studio and office space for WYSO and professional offices for Iron Table Holdings. (Rendering by Max Crome Architecture)

This article looks more deeply at WYSO’s plans for the Union School House that were announced in last week’s News.

A fixture on Antioch’s campus since 1958, when it was founded as a student-and faculty-run radio station, 91.3 FM-WYSO  is moving to 314 Dayton St. The move will officially end a 63-year affiliation with the college. In 2019, the station became an independent public radio station after purchasing its operating license from the college.

Spurred by an expanding workforce and recent approval by the Village Planning Commission for the renovation of the historic Union School House that will be WYSO’s future home, the Yellow Springs-based public radio station is in a growth phase.

Local comedian Dave Chappelle’s company, Iron Table Holdings, purchased the Union School House property last year, and will fund the renovation project. He will also locate his own offices on the site. Numerous calls and emails seeking comment from Chappelle about the project were not returned by press time.

According to the conditional use application to Planning Commission submitted by Crome Architecture, the existing building, constructed in 1872, will see a major renovation, and a two-story 10,000-square foot addition will be constructed on the property’s west side. In addition, the front and rear entrance will be upgraded with new stairs, patios and a ramp, with significant structural modifications to the building’s interior and roof. A lot adjacent to the Union School House site was purchased for a parking lot for WYSO staff and visitors and a 150-foot radio tower will be added. The targeted completion date is 2023.

The design “was all about the natural light,” said architect Max Crome at Planning Commission’s July 13 meeting, referring to the large windows already part of the building. Plans involve fully restoring the window cells in the basement and the large windows throughout the building, and constructing an atrium featuring a skylight that will extend from the roof all the way down into the basement.

An open interior will allow room for community events, a bigger volunteer area for fund drives, and a performance space of about 80 chairs for special events and existing WYSO music shows such as Kaleidoscope, Dennis explained. The project will feature new on-air studios, a newsroom and editing suites. The added space will also mean that the popular workshops provided through the Eichelberger Center for Community Voices can further the center’s mission by offering more slots for participants, he added. A bookshop featuring local authors, recordings of WYSO features and merchandise is also planned for the site, according to the application. The second floor with a separate entrance will house professional offices for Iron Table Holdings.

While the venue will have expanded programming and participant capacity, because of FCC regulations regarding security, Dennis emphasized that any show that occurs in the new space will not be a public event, and that the new space “is not a theatrical venue.”

According to Dennis “small performances featuring bands and perhaps a quarterly concert event,” will be held. However, “the public will be invited to see performances through invitation only,” he said.

“We don’t want neighbors to think that there will be hundreds of people coming through,” he continued.

Crome told the Planning Commission that he designed the addition with intentional difference from the original building.

“When we talk about conserving old buildings and doing additions to them, a cardinal sin is trying to match the old building,” he explained.

“It really is a disservice to the original building and the era that we are doing the new work in,” he said.

Recent expansion of WYSO programming and staff are one reason for the move to a new facility, according to Dennis.  Per a recent press release, WYSO has tripled its reporting staff in the past 18 months, hiring four full-time journalists, and several contract reporters, editors and producers. They now have 25 employees.

In addition to space issues, WYSO faces maintenance concerns at their current location in the Charles Kettering Building on Antioch’s campus, according to Dennis. He pointed to ceiling leaks as one problem. That building was originally built in 1961.

Looking toward a new local facility, the station considered a capital campaign but demurred because their biggest donors were still paying off pledges to buy the WYSO license, Dennis added. The pandemic was also a factor.

“Raising money could be difficult with so many people out of work from COVID,” Dennis said. He estimated WYSO would need to raise $7 million to $8 million for a new building in Yellow Springs.

Then, around the time that WYSO began expanding their location search beyond the village and along the I-675 corridor, Chappelle and his team reached out to WYSO about relocating the station to the Union School House, Dennis said. Chappelle had purchased the 1.4-acre property for $480,000 in December 2020.

Moving to the Union School House and leasing space from Iron Table Holdings presented WYSO with an opportunity to remain in the village, Dennis said. He added that WYSO wanted to remain in Yellow Springs, and would have considered leaving  “only if we couldn’t afford to relocate in the village.” The station does additionally have plans to lease a small satellite office in the newly renvated Dayton Arcade.

“His generosity guarantees that we can stay in the village,” Dennis said of Chappelle.

According to Dennis, Chappelle has been a fan of the radio station for years, donating “100% net revenue from ticket sales” to WYSO after a 2019 performance at the Schuster Center in Dayton. The donation came during a challenging cash crunch for the station.

Dennis did not share lease agreement details for the new location, saying they are still in process, but he did say that the agreement, when finalized, will be “below market value.”

Dennis also said he appreciates the modest lease agreement the station has with Antioch, “who also didn’t want the station hobbled with a big lease after the purchase.”

One Response to “New era, location for WYSO”