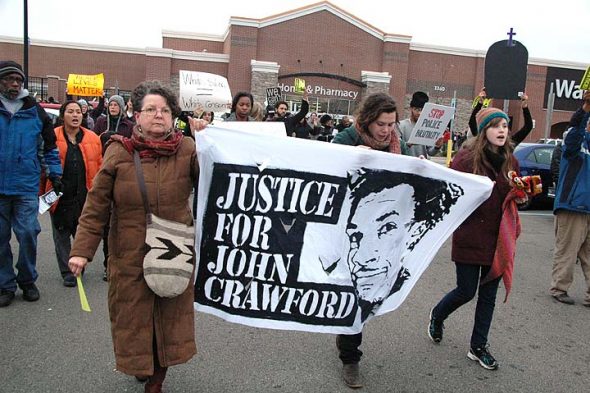 From left, Yellow Springs residents John and Maria Booth and Liz Porter were among the participants in Black Lives Matter protests at the Beavercreek Walmart in December 2014, following the police shooting death of John Crawford III in August. (News Archive photo by Diane Chiddister)

Reparations fund to address past injustice

This year marks the 100th anniversary of the Tulsa Race Massacre, when mobs of whites from Tulsa, Okla. violently razed the thriving Black community of Greenwood — known as “Black Wall Street” — to the ground. In less than 24 hours, white Tulsans killed several hundred Black Americans and left thousands more homeless and penniless, destroying years of economic growth and cutting off at the root the chance for future generations of Black Americans to benefit from that growth.

Discussion around and work toward reparations for survivors of Greenwood — and for all Black Americans affected by the echoes of slavery, segregation and ongoing institutional racism — has waxed and waned over the years. Though the national conversation around reparations began again in earnest last year as Americans took to the streets in protest over the police killings of Black Americans, that conversation continues to stall over a series of sticking points: What should reparations look like? To whom should they be granted? And who should pay them?

In Yellow Springs, discussion around those questions has netted a recent product: the establishment of a Reparations Fund facilitated by The 365 Project’s Young People of Color and YS Speaking Up for Justice and with initial funding by villager Susan Harrison.

Representatives from those organizations and Harrison met with the News via video chat recently to discuss the initiation of the new fund. Harrison, who is white, said she was inspired by the weekly marches and rallies led by YS Speaking Up for Justice downtown last year in protest of police violence against Black Americans. The repeated rallying cry of those events — “Do something!” — encouraged her to put her money where her mouth is, so to speak.

“The purpose of the fund is to uplift people of color,” Harrison said. “The hope is that other people will see the value in this fund and contribute … [and] begin to correct hundreds of years of injustice.”

With $20,000 to seed the fund, Harrison approached Kevin McGruder, the treasurer of The 365 Project, to discover a way to get the project off the ground.

“We talked for several months about ways to use the funds and distribute them,” McGruder said. “Susan arrived at dividing it between [the two organizations].”

The 365 Project will serve as the fiscal agent for the fund, McGruder said, as the organization has for other funds in the past, but the decisions about how the funds are used will be made by the organizations themselves, both of which are led in part by Yellow Springs youth.

“By giving the reins to the young people, they may have some tremendous ideas that we never would have thought about,” Harrison said.

Bomani Moyenda, who acts as an advisor to the youth who have led YS Speaking Up for Justice since last summer, said those young people haven’t yet made any decisions about what they’ll do with the funds as they focus on transitioning into summer jobs and preparing for college — “They’re still shaking out the wrinkles,” he said — but that they’ll be meeting soon to discuss ideas.

“I think a lot can be done with the funds, and I’ve said it would be good to create some programming, but I’ll really be trying to listen to them and guide them,” Moyenda said. “They’re pretty sharp.”

John Gudgel, who co-founded The 365 Project, said its Young People of Color sub-group is looking to use some of the funds to create new programming and continue programming the group has facilitated in the past, including a workshop and panel discussion to be hosted by young people of color from Mills Lawn, McKinney Middle School and Yellow Springs High School.

“They would talk about issues that pertain to them — stereotypes, accentuating positive historical achievements from people of color and having serious, courageous conversations,” Gudgel said.

As the groups plan for the future, the Reparations Fund has already made its first disbursals: five scholarships of $1,500 each were awarded to YSHS Class of 2021 graduates Annlyn Foster, Sophia Gisslen, Haneefah Jones, Arielle Johnson and Griffin Roberts. According to a press release from The 365 Project, the scholarships were given based on the students’ “work on racial equity and justice” through the Young People of Color and YS Speaking Up for Justice.

While national conversations around how reparations should be presented continue, a few efforts toward reparations have been modeled in the U.S. In 1994, the Florida Legislature passed a bill awarding $150,000 to survivors of the Rosewood Massacre, another instance of white violence that destroyed the Black town of Rosewood in rural Levy County, Fla. in 1923; the legislation also approved scholarships for descendants of survivors. In March of this year, the city of Evanston, Ill., approved funds to be offered to Black residents affected by discriminatory housing practices over the years, with up to $25,000 in housing grants available to Black residents. According to reporting by CNN, the funding will be supported by sales tax from the sale of recreational marijuana, and will make Evanston the first local community to initiate a reparations fund for Black Americans.

In both of these instances, reparations funds have been meted out by governments, with sometimes heavy restrictions on those funds also outlined by those governments. These reparations have also been made decades after the specific injustices they’re intended to address have been committed — a particularity that Harrison said influenced her to start the fund outside of government involvement.

“If we wait for the government to do it, we’ll probably be waiting longer than any of us sitting here will be alive,” she said. “Government grinds slowly, and they’ll make a proclamation, but maybe they don’t do anything — so here’s some money.”

Harrison also noted that the few instances of government reparations on record — and the conventional understanding of reparations — involve money being given directly to Black Americans. While the local Reparations Fund does have some flexibility — 15% of each representative group’s funds is earmarked to be used as small-scale grants that can be given out at the discretion of the groups — the rest will be used in ways that are unconventional in terms of how reparations are typically conceived, such as the educational programming mentioned by Gudgel and Moyenda. Harrison said that this particular model of reparations was decided on after long discussions between herself and members of The 365 Project and YS Speaking Up for Justice.

“We realize that trying to repay all the people from the past would be an enormous undertaking — even within a small local community, it would be difficult to do,” Harrison said. “We ended up taking the approach of looking forward and doing what we can for the future.”

Moyenda said this model of reparations could also be an important tool in the effort to secure the teaching of critical race theory — which operates on the idea that racism is not only individual, but systemic — in schools. That effort is currently being actively obstructed in a number of state governments, including Ohio’s.

“The effects of [banning critical race theory] in schools would be dire,” Moyenda said. “I see opportunities for YS Speaking Up for Justice to contribute in pushing back against this.”

Historian John Fleming, a member of The 365 Project, said he thinks part of the value of the Reparations Fund — however its monies are distributed — is in normalizing and broadcasting the conversation around reparations, which is often met with skepticism and animosity.

“People talk about it, but very little is being done — this is something concrete,” he said. “A lot of white people say that they were not responsible for slavery, so why do they have to pay for something they were not responsible for? But if you look at the legacy of slavery and Jim Crow, millions of white people benefited from the fact that African Americans were enslaved for 260 years and denied opportunities for another 100 years.”

He added: “What reparations are meant to do is really to face our history— and I know it makes people uncomfortable, but that’s how you learn: when you’re uncomfortable.”

Speaking to the discomfort, Len Kramer — who has led The 365 Project’s periodic “Courageous Conversations” groups, which are intended to guide its participants in engaging in interracial dialogue — said he’s ready to engage with folks who aren’t sure about the idea of a Reparations Fund.

“I think the overwhelming majority of people in Yellow Springs will be supportive, but of course there’ll be some pushback — I would expect that,” Kramer said. “But if people have questions, I think we can answer them and provide information that will help them get past it.”

Looking ahead, Harrison said she envisions the Reparations Fund growing as more white people who have been looking for a way to address their roles in systemic racism head-on feel called to contribute. In that way, she said, the fund itself could change to address the needs of the village’s Black residents.

“If this fund gets large enough, it might be able to do lots of things, like housing and starting up businesses — who knows?” she said. “The main thing right now is to keep it growing.”

For more information on the Reparations Fund, or to contribute, contact The 365 Project at the365projectys@gmail.com.