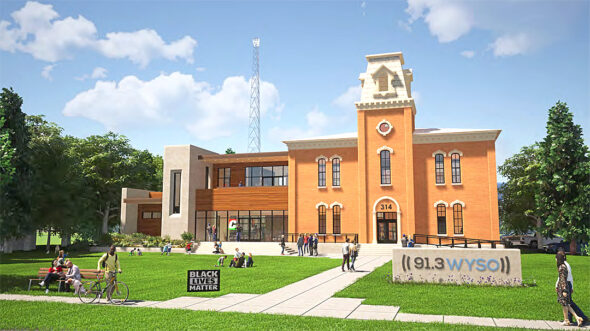 A rendering of the proposed renovation and addition to the historic Union School House at 314 Dayton St. for the new home of local public radio station WYSO was presented at Planning Commission on Tuesday, July 13. The commission approved the conditional use permit for the property, which was submitted by locally based comedian Dave Chappelle’s company, Iron Table Holdings, LLC. (Rendering by Max Crome architecture)

At its regular meeting on Tuesday, July 13, Planning Commission approved a major renovation and addition at the historic Union School House for the new site of the local radio station WYSO.

Commission members Frank Doden, Laura Curliss, Susan Stiles, Stephen Green and Sarah Amend voted unanimously in favor of approving the conditional use application and site review submitted by Max Crome, of Crome Architecture, on behalf of Iron Table Holdings, a company owned by locally based comedian Dave Chappelle. In addition to offices, studios and a performance space for 91.3-FM WYSO, the property will  house the professional offices for Chappelle’s Iron Table Holdings, according to the plans.

Located at 314 Dayton St., the 1872 building was the first integrated school in Yellow Springs, and for several years was the Village offices headquarters and jail. In recent years, the building was a hub for several small businesses who rented space there, although it had fallen into disrepair. Chappelle bought the 1.4-acre property in 2020 for $480,000, and purchased an adjacent lot for $70,000 earlier this year. The lot is slated to accommodate additional parking.

WYSO started in 1958 as an Antioch College student and faculty radio station, and purchased itself from the college in 2019 to become an independent nonprofit. Meanwhile, it has remained on the Antioch campus, occupying the ground floor of the Charles F. Kettering building with a lease that runs through March 2023.

WYSO Station Manager Luke Dennis, addressing the Commission, said WYSO would move in upon completion of the project and rent the space through a long-term lease agreement. He said WYSO had considered constructing a new station in Yellow Springs, at an estimated cost of $7 million to $8 million. However, with the recent license purchase from Antioch, WYSO was not in a position to initiate a capital campaign.

“The project allows us to keep the station in the village,” Dennis said.

The Union School House plans include remodeling the existing building and constructing a 10,000-square foot addition on the property’s west side. According to the application submitted by Crome, the addition would be designed in such a way as to “not interfere with the historical or architectural character of the original building.” Also planned is a 150-foot radio tower. 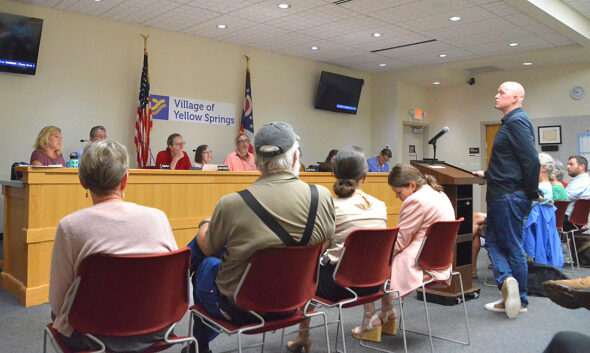 Max Crome, of Crome Architecture, on behalf of Iron Table Holdings, unveiled plans to remodel the Union School House to become the new home of WYSO at the July 13 Planning Commission meeting. (Photo by Megan Bachman)

Many neighbors who are directly impacted by the renovation and addition plans because they live near the building, came to the meeting and expressed  support for the project. Leslie Lippert has lived at her Dayton Street home for 26 years. Lippert was delighted to see the renderings of the architecture plans, and welcomed improvement to the neighborhood.

“The building has been an eyesore for 26 years,” she said.

Another neighbor, Ellen Hoover, was relieved to see the parking plans, and was appreciative of the attention to historic detail in the design.

“[The plans] reflect a sensitivity of the historic nature of the building but also the neighborhood, in which some of the oldest homes in Yellow Springs are located,” Hoover said.

Other neighbors were supportive, but expressed some concerns. Lisa Abel mentioned the potential for traffic issues on Union Street, asking that WYSO “remind their employees to slow down.” YS News Editor Megan Bachman, who lives near the future WYSO production offices, asked the Commission to acknowledge that it will be located in a “very residential community.” She asked both the commission and the architect to consider the visual impact on the neighborhood, mentioning the lighting at night, and the proximity of the addition to the west side of the property.

Architect Max Crome, who is also a Yellow Springs native, envisions the building as a potential monument. Primarily based in northern California, Crome Architecture is in the process of renovating and opening a satellite office at the former First Baptist Church on Xenia Avenue.

“There is potential for the building to have an iconic role in the village,” Chrome said of the Union School House.

Although some might consider a tear down of the current structure, Crome disagrees.

“The building needs major surgery, but could last another 150 years with repairs,” he said, of the Union School House.

The News will cover the meeting more extensively in an upcoming article.