The Briar Patch — The architecture of community

“Architecture is a constant dialogue with remaking the world” — Sir David Adjaye, architect and designer of the National Museum of African American History and Culture in Washington, D.C.

One summer about 10 years ago, dozens of African American, Dominican and Puerto Rican families who had rented their apartments for generations in a quiet working-class neighborhood where I worked were evicted after developers bought an entire block of apartment buildings. Over the course of weeks, the block was emptied out. A neighborhood, once full of vibrant music, the laughter of children playing wall ball and jumping double Dutch became a ghost town. Within 12 to 18 months, the neighborhood buildings were redesigned by architects and renovated. New tenants, predominantly upper-middle-class white people just out of college moved in. The buildings were uber-designed with precise and polished facades to the point of overkill. The only thing missing was a dog park. Tragically, the spirit of the block was transformed through a shockingly fast process of gentrification. No music, very few children returned and most devastatingly, no more diversity.

Although a face value definition of architecture is “the art or practice of designing and constructing buildings,” a chief component of that definition should include an aspect related to community building. After all, there is a symbiotic relationship between building function and human existence. I witnessed the wholesale destruction of an existing multi-generation close-knit community with established institutions and systems of support, a cautionary contemporary tale of a super-fast and ultimately destructive process, a settler colonial redux for contemporary times.

Sometimes it’s good to be reminded that dwellings have meaning beyond an individual’s portfolio investment and can be designed in such a way as to protect people, transform and shift functions beyond a shelf life of 50 or 60 years. It is also important to remember there are always choices that are more life affirming and protective than others.

For example, the Dogon people of Mali have a public building called a torguna, that is constructed with eight pillars, a thick roof to keep out the hot sun, open sides to allow for air flow, almost like the shelters in public parks, but with a low roof. You must scrunch down into the building as opposed to walking full height inside. The torguna featured in the documentary “Building Africa, Architecture of a Continent,” is, according to internationally renowned Ghanaian British architect Sir David Adjaye, “a place where the Dogon go to resolve their conflicts,” and is “essentially a courthouse of sort.”

There is a brilliance in the torguna design — a structure built to resolve community differences in such a way that people can’t stand up to full height, minimizing aggression, while making people just physically uncomfortable enough to want to resolve conflicts quickly. Think about it for a moment — the structure makes it difficult for an individual to hold onto the angry energy needed to keep a conflict fueled. What is particularly striking about the function of the building is that its designers seemed to understand human nature enough to make allowances for it in the design. It is also clear that social justice and equitable treatment of people is at the heart of a structure constructed to serve an important function in the community. 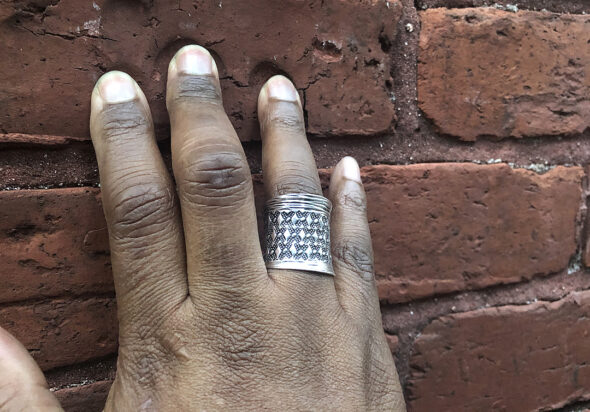 Then there are the places in which the ghosts of human suffering haunt dwellings. At first glance, the image accompanying this column is just my hand touching a brick wall. The wall is located near a church, more than likely built by enslaved people in Charleston, S.C. However, a deeper observation reveals something more tragic underneath my fingers — that of fingerprints of an enslaved African forced to make bricks that were ultimately used to construct buildings all over Charleston, including an indoor slave market. The market was built at the behest of the “gentile” wives of the owners of Africans held in captivity. Apparently, these women caught the vapors at the unseemly site of naked Black bodies being sold on street corners to the highest bidder, but not of brutal and dehumanizing practice of chattel slavery.

This picture, taken in 2020 before the COVID-19 pandemic shut everything down, reflects the residue of humanity imprinted in the walls of hundreds of  buildings all over the city, including on the walls of the slave market, a building with a vile past that is now an important historic education site. Imagine having to build a slave market while enslaved.

The fingerprints remain visible on the exposed bricks of some high-end shops, restaurants and colonial homes that tourists visit while in Charleston. Most are fingerprints of women and children, unpaid labor who churned out materials from which one of the most important port cities in the colonies and expansively this nation was built. Discovering these fingerprints was like walking through a settler colonial crime scene.

Many people of African descent believe protections can be added to dwellings, keeping out threats considered both otherworldly and human in origins. Haint blue, similar to the color of the sky, is painted on the homes of some Black people near or around cities considered full of haunted spirits such as Charleston. The blue is meant to steer harmful spirits towards the heavens and away from the house. Haint is another word for evil spirit.

There is also the sprinkling of dang’em dust, made of unknown medicinal herbs that my mother spoke of when describing stories of her childhood, and used by the elders to keep evil spirits or “duppy” from entering a home. The home, symbolizing a protective force in and of itself, may sometimes need spiritual reinforcement.

Many sought spiritual reinforcement through liberation theology espoused by the black church. In Yellow Springs, First Baptist Church, where my family attended, was established in 1863 and originally called the anti-slavery church, clearly defining its mission beyond worship within the church’s walls. Formerly enslaved entrepreneur, philanthropist, and landowner Wheeling Gaunt was a member of the African American Episcopal or AME church. Gaunt rented homes to African Americans in the village at affordable rates in the 1800s and supported abolitionist causes.

The architecture of future’s past

In 1955, when former Tuskegee Airman and Wright-Patterson Air Force Base engineer Omar Robinson, purchased land now known as Omar Circle, he solved a problem for some African American families who because of discrimination, had trouble securing mortgages for custom built homes. Robinson, also experiencing discrimination, bought a large plot of land, built his family’s home, and subdivided the unused portions into multiple lots to sell to Black families. Through his business, Robinson found a company who offered mortgages to families looking to live in Yellow Springs. Mid-century modern homes, with their simplicity in design and emphasis on function were constructed. Community driven, Robinson provided housing for families, many of them educators, scientists and military employees, part of a growing Black middle class in that era.

Robinson’s housing development was gearing up as African nations were gaining independence from their European colonizers. Ghana, gaining its independence from Britain in 1957, found promise in the modernist vision of its leader Kwame Nkrumah. Under Nkrumah’s leadership, the push for bold architectural design in new building constructions began in earnest. Nkrumah attended college in the United States and was intrigued with modernist approaches to architecture, particularly the emphasis on simplicity of design and function. He believed it was the approach needed to bring Ghana into the future.

The push for African independence and the Civil Rights Movement in the States converged as new generations maneuvered beyond the head winds of racism. In the village, this included the promise of raising families in a safe and welcoming environment.

Caveats. Omar Circle wasn’t part of the Village when Robinson bought the property. Banks in Yellow Springs denied his mortgage application. The shrinking diversity that this community claims and clings to? Much of it occurred because Black residents pushed the village to be what it claims it is. We really haven’t earned the right to call ourselves diverse and won’t until our local policies — including zoning and cultural practices, support it.

Buildings are containers for the living, holding our potential within their walls. Good community architects know that well designed buildings can transcend time and space for future generations to come.

7 Responses to “The Briar Patch — The architecture of community”