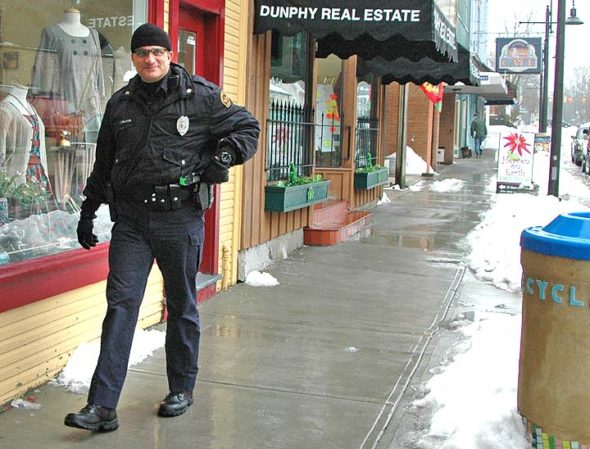 Yellow Springs Police Chief Brian Carlson, shown here when he was an officer in 2015, has resigned as YS Police Chief.

Village Manager Josué Salmerón clarified this morning that although Yellow Springs Police Chief Brian Carlson has resigned, it is not “effective immediately.” Per his contract with the Village, Carlson is required to continuing work at his post for 90 days.

Salmerón also confirmed that an interim police chief will not be immediately named, with hopes that a new chief will be hired to take over for Carlson.

Carlson did not provide a reason in his brief resignation letter, but wrote, “It has been an honor to serve the community of Yellow Springs and I offer my services to assist in your search for my replacement.”

In a later text message to the News, Carlson wrote that he was “just ready for another chapter,” and had no plans for other employment. He added that it has been an “honor to work at the YSPD and reform our public safety methods.”

In the Village press release, Village Manager Josué Salmerón thanked Carlson for his “tireless work to modernize our police force and progress made to create a social-justice oriented police department.” Salmerón noted that Carlson took the helm during a time of heightened scrutiny for local police and accomplished much to “increase community engagement, increase community policing and change local police culture.”

Carlson was promoted to interim police chief in January 2017, after the former chief resigned following community protest over aggressive police actions at the annual New Year’s Eve  celebration. Carlson was then hired as the permanent chief in June 2018, and most recently had his contract renewed in June 2019. He joined the local force in 2010.

Carlson will assist with the leadership transition over the next 90 days and the search for a new police chief will begin immediately, the press release added.

“I’m proud of what we accomplished in a short period of time,” Salmerón wrote of Carlson’s tenure. “We have implemented foot patrols, bike patrols, improved community engagement, have built robust case management that extends beyond policing and includes mental health, and financial assistance with utilities and rent.”

A full story will appear in an upcoming issue of the News.