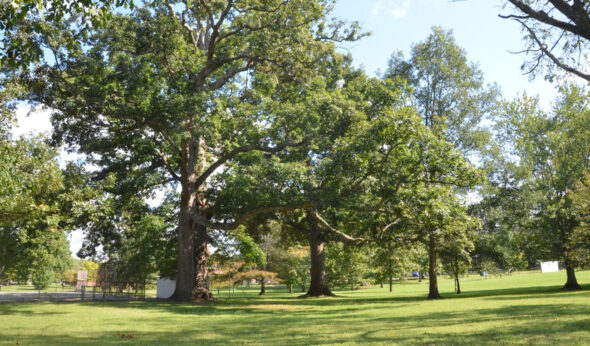 Development of a plan for the Mills Lawn Elementary School building and property at the center of town has been set in motion.

On the request of the Yellow Springs Schools district, the Yellow Springs Development Corporation, or YSDC, has agreed to work in partnership with district leaders “to help shape the future” of the nearly nine-acre site, should the district no longer need it for a school.

The action comes as the district seeks approval of a combined property and income tax levy on the November ballot to build a $35.6 million K–12 facility where the middle/high school campus is currently located on East Enon Road. Construction of the proposed facility would mean vacating Mills Lawn, the possibility of which has prompted questions among concerned community members about likely prospects for the building and its surrounding greenspace.

In a special meeting conducted through the Zoom online platform Thursday, Sept. 2, the YSDC continued an executive session begun during its last regular meeting Aug. 10, which was held in person at the John Bryan Center. Meeting privately for nearly an hour Aug. 10 and about 25 minutes Sept. 2, YSDC members came back on the record to approve three items related to Mills Lawn:

• To accept the school district’s request to provide assistance in exploring options for the Mills Lawn building and site.

• To accept a grant through the Yellow Springs Community Foundation to cover the costs of the exploration project, including fees associated with such aspects as project management, consulting, administrative costs and legal assistance.

• To approve the creation of a subcommittee to manage the exploration project, including hiring consultants as needed.

The votes on each of the three items were unanimous, with the YSDC’s two representatives from the school board, Steve Conn and Steve McQueen, abstaining.

The YSDC followed up on the meeting with a press release dated Tuesday, Sept. 7, announcing the group’s initial actions in agreeing to work with the district.

No timeline has been set, but the press release indicated the 2023–2024 academic year as the school’s anticipated move from the property, should the facilities levy pass and the proposed K–12 structure be completed. YSDC President Lisa Abel said during the Sept. 2 meeting that she would like to get a subcommittee in place as soon as possible, and its members need not be part of YSDC.

In an email followup to questions from the News, Abel wrote that YSDC members “hope to see a community engagement process take place in the next few months. This time seems ripe.”

In the press release, she wrote that, “In essence, the YSDC will approach this task in two parts:

First, work to find creative re-uses for the Mills Lawn building, as an alternative to demolishing all of the building. Second, sponsor a public engagement process to find the best use and potential steward for the remaining acreage.”

In response to a question from the News about the Community Foundation grant, Abel replied that the grant is being directed through the Foundation to the Mills Lawn initiative from a private donor.

“The YSDC did not make a request for funds,” Abel replied. “Instead, an anonymous donor asked the Foundation if they could provide funds to the Foundation to help with a Mills Lawn exploration process. The Foundation does not run projects like this, and informed the donor that the funds could be directed to a nonprofit organization [such as the YSDC] that could run this type of project.”

Abel said that the gift amount is unknown, “but we have been given the go-ahead to proceed with next steps — hiring a project manager, identifying a consultant to help with the work and paying fees as we encounter them.”

The YSDC is a nonprofit, quasi-governmental group formed in early 2020 to bring together representatives of Village and Township governing bodies and institutions to attract and support economic development in Yellow Springs and Miami Township.

The group includes 11 voting members and a handful of ex-officio members. Meetings are open to the public, though executive sessions are conducted privately.

According to Abel, working with the schools on Mills Lawn’s future “is exactly the sort of project that YSDC was created to facilitate.”

In the press release, she states: “The YSDC believes that the economic health and future vitality of the village is tied tightly to both the health of our schools and the composition of the central business district and surrounding neighborhoods.”

The group also recently announced a new partnership with Antioch College to reopen the Wellness Center, which has been closed since March 2020, when pandemic lockdowns began in Ohio.