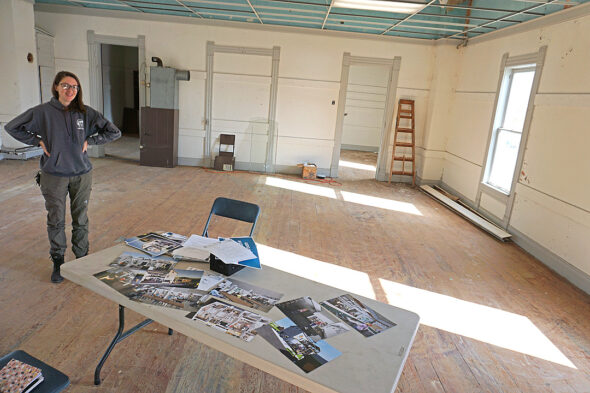 Piper Fernwey, of Clifton Crafthouse Co-op, looks over a collection of architectural renderings of the upcoming combined cooperatively owned taphouse, commercial kitchen, community event space and affordable artist live/work residences. Fernwey is pictured at 4 Clay St. in Clifton, the site of the Crafthouse, on the second floor, where the community event space will be built. (Photo by Lauren “Chuck” Shows)

That’s the question implicit in the vision of those working to enliven the Clifton Crafthouse Co-op in the Village of Clifton, just three miles outside of Yellow Springs. When completed, the combined taproom, community event space, commercial kitchen and affordable artist residences will work in tandem to support one another.

The first of the venture’s three phases will be the taproom and community space, slated to open in 2022. The taproom will serve locally sourced food and alcoholic and nonalcoholic beverages in a family-friendly environment, designed for inclusivity and accessibility, with such features as an elevator and gender-neutral bathrooms. The total cost of all building phases is projected to be $1 million.

The Crafthouse is set to open at 4 Clay St. in Clifton, just steps away from the Clifton Opera House. The 120-year-old building, which previously housed Weber’s Antiques, was purchased last year by Clifton resident Piper Fernwey. (Fernwey serves as president of the Crafthouse’s 10-member board, of which YS News’ editor Cheryl Durgans is also a member.)

Fernwey said when she bought the “cornerstone building” — which, according to locals, has housed everything from a general store to a post office to square dancing over the years — she knew it should continue to serve the community in its next incarnation.

“The vision was to honor the history of the building and revitalize it in a way that returns it to the community gathering space it always was,” Fernwey said. “I went to the [Clifton] Village Council first and asked, ‘What do you want to see in your neighborhood?’”

Fernwey added that, in envisioning uses for the building, she also considered the needs of communities surrounding Clifton.

“Clifton is everybody’s cousin — it’s not just our community of 147,” she said. “It’s also Yellow Springs, Cedarville, Xenia and Wilberforce — we can be a gathering point with a space that meets the needs of all of those communities.”

Fernwey found that Clifton’s villagers and visitors wanted a place to have a glass of wine or a beer after a show at the opera house or a hike in Clifton Gorge. A taphouse seemed like the best answer to this community desire — but most taprooms are only open for limited hours a few days each week, and Fernwey saw the edifice as ripe for much more.

“Underutilization is a problem we’re trying to avoid,” she said. “So I thought, ‘What else could I pair [a taphouse] with that utilizes this building to best meet the needs of the community?’” 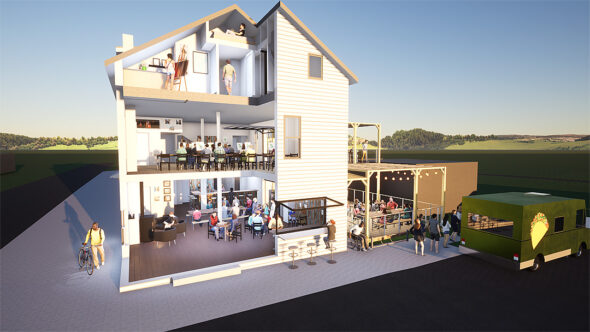 An architectural rendering of Clifton Crafthouse Co-op by Field9 Architecture. The finished edifice, which is located across Clay Street from the Clifton Opera House, will feature a taproom and shared commercial kitchen on the bottom floor, community event space and outdoor taproom seating on the second floor and artist residences on the third floor.

Fernwey pored over reports compiled by local organizations that identified community needs, and found inspiration in one completed by Yellow Springs resident Jackie Anderson and Madeline Gresham in 2013. As students in the Master of Public Administration, or MPA, degree program at Wright State University, Anderson and Gresham imagined a new use for an existing space during a semester-long urban planning study. They chose the former site of the Wright State-operated YS Family Health Clinic — now the home of Miami Township Fire-Rescue — as their canvas, sketching living spaces for artists, performance and creation spaces and a community garden.

Anderson — who will also act as a co-advisor with Fernwey to seven current Wright State students in the MPA program who have elected to work on the Crafthouse’s development — said she and Gresham had a lot of help from Village officials in completing the initial project. When it was finished, they handed the finished project over to the Village.

“​​[The project] was really celebrated by some of our Yellow Springs partners, so we handed it off to the people who had helped us … as a ‘thank you’ for helping us dream a big dream,” Anderson said.

Anderson and Gresham were soon asked by Village leaders and YS Home, Inc. to help determine if their vision of affordable dual live/work spaces for artists could actually be undertaken in the village, and the resulting feasibility study became the pair’s capstone project at Wright State. The same study would land in Piper Fernwey’s hands eight years later — much to Anderson’s surprise.

“I just thought it went away to the graveyard for capstone studies,” she said. “I handed it over to the universe and wished it well and thought it was gone — and it came back!”

The artist live/work spaces planned for the Crafthouse are largely based on Anderson and Gresham’s work, with the Crafthouse’s vision designed by Fernwey and translated into architectural renderings by FiELD9 Architecture out of Mansfield, Ohio. The residences, planned as limited-residency affordable housing, will be on the building’s third-floor addition — completed by lowering its existing attic — and will feature a shared living space and five individual living and working units, one of which will be fully ADA-accessible.

“The idea is that we’ll build out [artist] residencies specific for different disciplines — so maybe two units will have their own sinks for visual artists who need to clean up, and maybe one will be soundproofed for a musical artist,” Fernwey said.

Resident artists will also use the community event space on the building’s second floor to lead classes and workshops, with the space also available to the co-op’s business members. It will feature a noise separation wall, trough sinks for cleanup, outlets for cooking equipment and storage space for materials. The room will be accessible by elevator or by a wrought-iron spiral staircase from the ground floor — a new addition Fernwey said she hopes will be collaboratively created by local artists with materials and antique items found around the building during its renovation.

“If someone wants to hold a meeting or an event in Yellow Springs, right now they’re going to think of one of maybe four places — the same ones everyone always thinks of,” O’Rourke said.

“As a marketing professional, I often do seminars, and [the Crafthouse] is going to add another location where I can host something like that — I think it’s going to create a great synergy for people around here.”

Sharing the bottom floor of the building with the taproom will be the shared kitchen. The commercially licensed kitchen will offer cottage business owners a place to produce their wares or to use in conjunction with the entire taproom space to host a pop-up restaurant, allowing entrepreneurs to test out new concepts.

Fernwey said that, though the kitchen isn’t intended as a business incubator, it will offer small businesses a place to grow — just differently.

“We don’t need to supply [business incubation] because [Spark Fairborn and ECDI] do a great job, so we’re partnering with them,” Fernwey said. “One of the things we found is that not everyone wants to grow that way — the focus isn’t ‘I want to sell bagels to everyone in Ohio,’ it’s ‘I want to be able to add one or two more customers so I can make this side gig my full gig.’ It’s a different definition of success.”

At the heart of the Crafthouse is its structure as a cooperative, which was formalized during participation in Co-Op Dayton’s Cooperative and Social Enterprise Incubator. According to this structure, the Clifton Crafthouse Co-op will be collaboratively owned by individuals and businesses, with a one-time payment of $250 securing a lifetime membership in the cooperative.

Cooperative membership will eventually also be extended to taproom workers and artist residents, and members will share a portion of profits and decide on the Crafthouse’s goals together.
O’Rourke said that, ultimately, the Crafthouse’s member-owned structure and community-minded approach was what drew him to work with the project.

“I was impressed by the inclusiveness — the Clifton Crafthouse will cater to so many aspects of a community, and each part of it aims to build community,” he said. “Having done marketing for a lot of different things, this just has a different heartbeat to it — of course, it’s a business, but it’s the people’s business.”

Having the business side of the Crafthouse controlled by members rather than investors will mean that making money won’t be the venture’s bottom line, ­Fernwey said.

“If we’re at a surplus, instead of that going just into investors’ pockets, we can make other choices — like can we make living there free? Can we make renting this space free? Can we provide scholarships to new businesses to rent the kitchen space?” she said.

With the community invested in the success of the cooperative as owners, patrons, teachers, students, artists and residents, Fernwey said Clifton Crafthouse Co-op aims to become a self-sustaining, collaborative environment.

“It’s building community wealth and meeting community needs — all at the same time,” she said.
A launch party for Clifton Crafthouse Co-op, hosted by Bob Partida, will be held Friday, Nov. 19, 6–8 p.m., in the Senior Center great room, with light refreshments and music. For more information, or to become a member-owner, visit cliftoncrafthouse.coop.