When was the last time you listened to an album about rabbits, fairies, robotic elves and invisible mountains? If you are so inclined, the answer to that question can be “today.”

On Aug. 22, local music and arts collective Toadstool Shadow released their second album, “Folk Songs of the American Wood Elf.” The album is accompanied by a 40-minute short film that premiered in Canton, Ohio, on Sept. 9 and has since been screened several times, including in Yellow Springs following PorchFest on Sept. 18. Plans for future screenings are underway.

“Toadstool Shadow is a music and arts collective,” Till said. “The hope is that it’s not just a band and that it engages in a number of different artistic pursuits.”

“Folk Songs of the American Wood Elf” is Toadstool Shadow’s second album, following its first, “Rainbow Nights,” which was released in 2019. The latest album comprises 12 songs and showcases a number of well-known local musicians, including Rob Heiliger, Rory Papania and Sam Salazar. While Till wrote every song and performed every instrument on the group’s first album, the latest release expands the collective’s musical roster with the likes of organist Larry Halpern, percussionist Romy Farrar and vocalist Nightshade the Elven Queen (Whitney Till).

The short film accompanying the latest album was shot by Eli Bowsman, a young videographer from Yellow Springs. 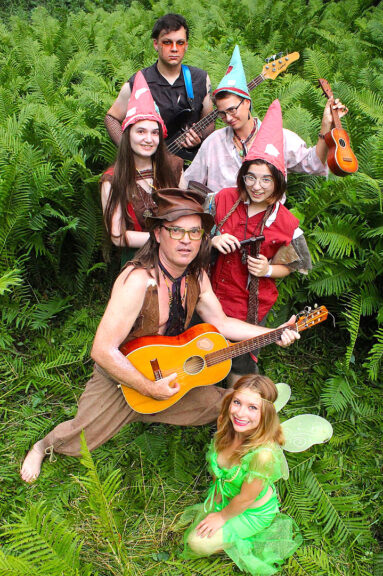 Toadstool Shadow’s newest album, “Folk Songs of the American Wood Elf,” is the second in a three-part fairy tale opera about a visionary rabbit. The album and accompanying film feature Yellow Springs musicians, artists and actors. Here, the “elf-core” band strikes a pose in a bed of ferns. (Submitted photo)

The subject matter of the latest album’s songs varies greatly but is unified by a shared dreamlike conception of a more fantastical world that exists alongside our own.

“The concept is that there is another realm that hides all around us that we can neither see nor comprehend,” Till said.

This realm manifests in our world through surreal melodies that trace stories of mermaids, magic carpets and unicorns, among many other fairytale themes.

Till said Toadstool Shadow’s latest album is just one piece of a much grander puzzle spanning multiple media.

“Toadstool Shadow is doing a three-part fairytale opera about a visionary rabbit,” Till said. “As you perhaps recall from music history classes … fairytale operas were an 18th- and 19th-century western European artform in which serious stories were told musically through fairytale imagery.”

The collective’s first album, “Rainbow Nights,” introduces the opera’s protagonist at 7 years old. After sheltering from a storm in the shadow of a toadstool, he embarks on a magical journey home. In “Folk Songs of the American Wood Elf,” listeners rejoin the bunny as a young adult questioning the veracity of the memories of his mystical experiences — even going so far as to consult a friendly but incompetent psychiatrist, portrayed by Ben Cooper. The bunny resolves to re-create his experience, this time bringing a video camera to document his adventure.

While production of the third part of the fairytale opera is underway, Till said the plot remains a “closely guarded secret.”

Toadstool Shadow draws inspiration from a diverse array of sources. Till cited psychedelia as the foundation of Toadstool Shadow’s “elf-core” sound, which incorporates elements of rock, pop and country. He said the collective also inherits its style from visual media, including Richard Dadd’s 1864 painting “The Faerie Feller’s Master-Stroke” and Richard Scarry’s 1963 illustrated book “I Am a Bunny.”

Till said the inciting incident that led to his conceptualization of Toadstool Shadow was an auditory experience he had in a local nature preserve.

“​​I was walking through Cedar Bog two years ago and heard some very quiet music coming out of one of the trickling natural springs,” he said.

The chorus of natural sounds in the bog, including the chirping of insects and frogs and the bubbling of the bog, coalesced into a musical inspiration that would net the project’s first song,

“Yellow Night,” and inform the attitude of the collective going forward.

When asked where a prospective fan of Toadstool Shadow should begin acquainting themselves with the collective’s work, Till jokingly replied that the best place to start would be to crawl through the mud of a local bog and listen until you hear the sound of tinkling bells.

For those without convenient access to a magical wetland, Toadstool Shadow’s music can be found on all major streaming platforms and their videos can be viewed on YouTube. The collective plans to release the short film “Folk Songs of the American Wood Elf” on Amazon Prime in the future.