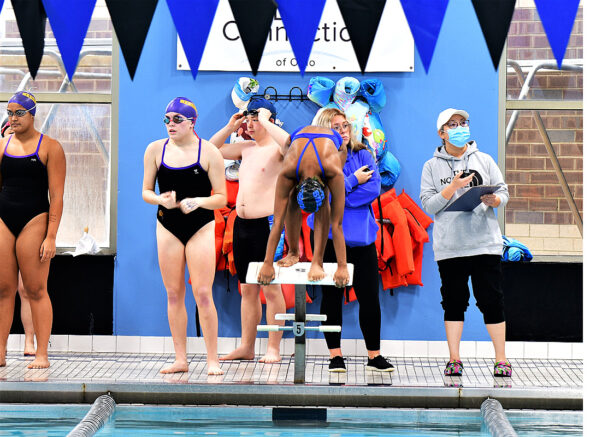 The Yellow Springs High School swim team returned to competition last weekend after a year’s hiatus related to the pandemic. The crew swam in the Bethel Quad Meet against three other schools at the Huber Heights YMCA on Saturday, Dec. 18. Pictured above on the starting block is Malaya Booth. (Photo by Kathleen Galarza)

Not able to support a team last school year because the Antioch College Wellness Center, their practice venue, closed because of the pandemic, the Bulldogs moved this year to the Xenia YMCA. The team is still recruiting swimmers to finish out the season. Interested high schoolers should contact Yellow Springs Athletic Director Jeff Eyrich or team coach Ashley Mangen.

The team kicked off the competition season at the Huber Heights YMCA on Saturday, Dec. 18, for the Bethel Quad Meet against Bethel High School, Fairborn High School and Bellbrook High School.

Congratulations on a great first meet of the season!
—Ashley Mangen, coach

Boys continue winning streak
The Yellow Springs High School boys varsity basketball team racked up two more wins in recent play, defeating Middletown Christian, 47–53, on Friday, Dec. 17, and Northeastern, 50–47, Monday, Dec. 20, according to the website of the Metro Buckeye Conference, or MBC, in which Yellow Springs is a member.

Six Bulldogs put points on the scoreboard in the Friday night home game, with senior DeAndre Cowen leading the squad for 17 points and eight rebounds. Other point-makers were senior Javas McNair, with 12 points, one assist and six rebounds; junior Eli Eyrich, with eight points, five assists and five rebounds; senior Malif Thomas, with six points and four rebounds; senior Nate Curtis with two points, eight assists and four rebounds; and junior Jason Knemeyer, with two points, one assist and two rebounds. The grade levels of several players were misidentified in past roundups; apologies to the players.

Statistics for Monday night’s game were not available at press time. The team is now at the top of the conference with a record of 8–1 for the season and 4–0 in conference play.

Girls lead conference play
The Yellow Springs High School girls varsity basketball team logged another win Thursday, Dec. 16, with a score of 52–34 against Middletown Christian. The team’s current record is 7–2 for the season and 3–0 in conference play, according to the MBC website.