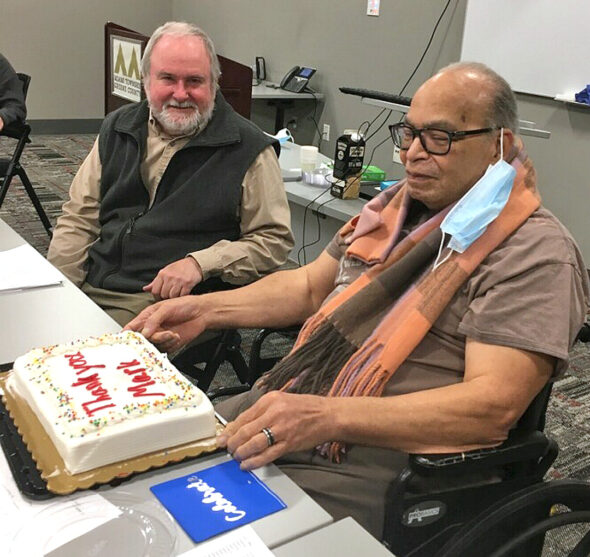 Retiring Township trustee Mark Crockett’s 20 years of service to the township was honored at a small ceremony during the Miami Township’s recent meeting, Monday, Dec. 6. With Crockett is Trustee Chair Don Hollister, who won his re-election bid in November. (Photo by Carol Simmons)

In honoring Crockett during the trustees’ most recent meeting, Monday, Dec. 6, Mucher presented Crockett with a pen to “commemorate all the years and all the signatures on all the checks and all the resolutions” during his time in office.

In addition to the pen, Mucher and Trustee Chair Don Hollister presented the longtime public servant with a plaque and a card. There was also a celebratory cake and eggnog shared with everyone in attendance at the meeting.

Mucher, who has been a Trustee since 1996, said he was grateful to have spent the past two decades working beside Crockett.

“I felt so fortunate that all the time that I’ve been here and all the officials I’ve seen come and go,” that Crockett was a consistent presence.

“There were so few times that we weren’t all in agreement about the direction we were going,” Mucher added, recounting the only time he remembers seeing Crockett show any anger toward him — when Mucher spoke negatively in a public meeting about “Obamacare.”

“He turned to me and said, ‘Don’t ever say anything about Obama again,’” Mucher recalled.
Crockett neither confirmed nor denied the memory.

Crockett’s term officially concludes at the end of this month. Plagued by ill health, he decided not to run for re-election this past fall, and voters chose Marilan Moir, whom Crockett endorsed, to fill his seat. Moir will be sworn in during the trustees’ first meeting in January.

In other Township business, Dec. 6:

Hollister reported Dec. 6 that the Township, which registered earlier this year as an intervenor in the Kingwood Solar array application to the Ohio Power Siting Board, or OPSB, had received word that the adjudicatory hearing scheduled Monday, Dec. 13, in Columbus, would be “continued,” in effect convened and then postponed, until after the new year.

Texas-based Vesper Energy has leased 1,500 acres of land from property owners in Miami, Cedarville and Xenia townships, with the bulk of the project — 1,000 acres — located in Miami Township, to construct the Kingwood project. If approved by the OPSB, the completed project is expected to generate about 360,000 megawatt hours of electricity a year for utility users in Ohio and states to the east.

The purpose of the Dec. 13 hearing was for the presentation of testimony, with the possibility of cross-examination, by intervenors and their legal representatives before an administrative law judge panel.

In followup this week, Hollister shared information Monday, Dec. 13, from the township’s counsel in the matter, Lee Slone, of Dayton-based Dinsmore & Shohl.

Slone reported to Hollister that while the hearing was called as scheduled, and all parties made their appearances on the record, Kingwood’s counsel indicated that the project’s representatives intended to send materials to the relevant parties “in the next few days and would try soon to schedule meetings to discuss compromise and proposed stipulations.” Slone did not explain further what that might mean.

According to Slone’s report to Hollister, no position arguments were made and little substantive discussion took place on the record Dec. 13. The parties tentatively set the continued hearing dates for the week of March 7, or March 14, with anticipation that five to six days will be necessary to complete the hearing.

Fiscal Officer Margaret Silliman reported that the Greene County auditor has recalculated the millage level for the bond levy passed in 2017 to construct the new firehouse.

When the levy went before voters four years ago, the auditor estimated that 2.3 mills were needed to make the approximately $280,000 annual payment over the life of the 30-year bond. After the recent reappraisal of property values, in which most local property values went up, in addition to interest rates being lower than the 5% rate anticipated before the bond was secured, the auditor determined that 1.5 mills will raise the necessary yearly amount to pay off the bond.

Tax payers won’t see a change in their property tax bill, however.

The trustees’ next regularly scheduled meeting is Monday, Dec. 20, beginning at 5 p.m. The trustees agreed to reschedule their first meeting in January from Monday, Jan. 3, to Wednesday, Jan. 5, so as not to abut with the holiday weekend.