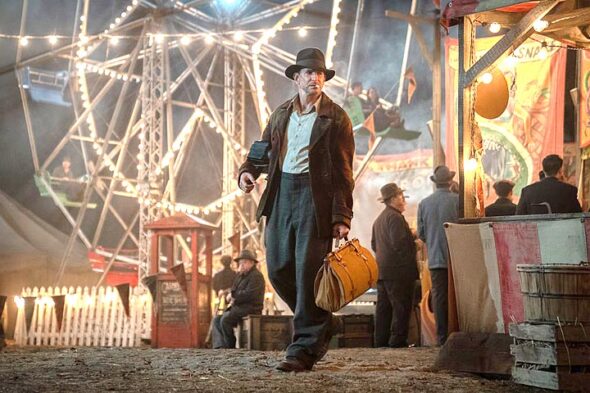 “Nightmare Alley,” released in December 2021, is a neo-noir thriller directed by Guillermo del Toro. Like the original 1947 film, directed by Edmund Goulding, “Nightmare Alley” is an adaption of a 1946 pulp novel by William Lindsay Gresham. (Movie Still: Searchlight Pictures)

Under the big top, anything is possible.

There, reality warps. Up goes down, the profane turns into performance and all the world stands on its head.

Although the American landscape was once replete with traveling carnivals, our standards for the spectacle have changed. Bearded ladies are now shorn and serpentine contortionists have packed up their bindles for good. We gave the strong men desk jobs.

Nevertheless, the polychromatic carnivals of yore still enchant us. From Stephen King to “American Horror Story,” these fabled fairs still dapple pop culture whenever we need a place and a space to defy expectations, to see ourselves grown grotesque in a funhouse mirror.

Guillermo del Toro’s rendition of “Nightmare Alley” is that mirror. Originally a 1946 pulp novel by William Lindsay Gresham, then a 1947 film noir by director Edmond Goulding, del Toro’s “Nightmare Alley” revives the carnivalesque narrative to remind audiences that deception has its consequences.

Set sometime around the Depression, the film begins with wayward drifter Stanton Carlisle (Bradley Cooper) stumbling into an ad hoc tent show. Alongside a crowd of local yokels, Carlisle gawks at all the horrible sideshow acts, particularly at the show of the geek — a “half-man, half-beast,” whom ringleader Clem Hoately (Willem Dafoe) later explains is nothing more than a subjugated alcoholic opium addict willing to do anything for his fix.

In exchange for warm meals and a bed, Carlisle finds himself gainfully employed as a do-it-all factotum around the carnival. Soon, his quick wit and can-do attitude allow him to cozy up with the troupe’s mentalist act, featuring Zeena (Toni Collette) and her partner Pete (David Strathairn).

Not long into the partnership, Pete cues Carlisle into the grift: Zeena’s mystical mentalist performance of guessing audience names and backstories is propped up on nothing more than verbal clues and panache. Carlisle quickly learns the word association of the act and, with another performer (Rooney Mara), leaves the carny life behind to bring his act to the big time.

Act two thrusts us into smoky nightclubs where Carlisle, armed with Zeena and Pete’s “code,” bills himself as a clairvoyant spiritualist — performing for the wealthy, who sip cocktails and seek supernatural thrills. Although he still relies on the verbal cues of Zeena’s carnival act, Carlisle has amassed some extra hubris in the intervening years. He begins duping even himself. Carlisle purports to communicate with the dead, and in his arrogance, believes he’s helping others. But psychoanalyst Lilith Ritter (Cate Blanchett) sees through this ruse.

Then, in act three, we see Dr. Ritter and Carlisle join forces in an effort to better fleece the rich and bereaved. Dr. Ritter, with her cabinet full of patient recordings, and Carlisle with his ever-ballooning arrogance and boundless faith in the veracity of his psychic visions, begin making money hand over fist. Eventually, the grifters fly too close to the sun, and by the end, our hero, Stan “the every-man” Carlisle, gets some poetic comeuppance for his career of manipulation.

By my metrics, del Toro’s spin on the “Nightmare Alley” story is far grittier than Goulding’s 1947 original — it’s closer, from what I’ve heard, to the novel. Del Toro’s rendition self-consciously exaggerates every pulp and film noir trope that came before. All the classic ingredients are here: a rise-and-fall narrative, the insatiable lust of some femmes fatale, dramatic shadows thrown around like they’re going out of style, cigarettes aplenty and a couple of gunfights for good measure. It’s not at all a satire of the genre, but rather a modern reprisal, perhaps even an homage.

Much like his anti-protagonist, del Toro sought to continually raise the stakes. While he wanted to wade around in the world of pulp fiction, all awash in moody hues and sinister textures, del Toro also aimed to extend the genre’s boundaries to accommodate the extravagance of the characters’ cons.

This added dimension affords del Toro the space to editorialize on the metaphorical function of the long con. A cultural critic and self-proclaimed communist, novelist Gresham retooled the carnival to stand in for the absurdity and decadence of American capitalism. (Find the difference between a business executive and a freakshow ringleader.) Outfitted with all the bells and whistles — and capital — of a modern film production, del Toro is able to resuscitate Gresham’s world with even greater lavishness. With a little polishing, the symbolism is as good as new.

The film itself functions like a carnivalesque hall of mirrors. Around every corner is a caricature of a deadly sin or a grim distortion of reality. Under the big top, after all, the lines between spectator and spectacle are purposefully blurred. We may chuckle condescendingly at the crowds who gawk at the freaks, but with a wink and a nod, del Toro reminds us that we cinema-goers are not too different. We still want to be entertained, shocked and horrified. We still crave the drama of demise.

So, while we might think we’re sharper than Carlisle’s duped audiences, we’re nevertheless still willing to participate in the fabrication of fiction.

“Step right up!” del Toro says to us.

And since I like a good story — never mind how true or false it might be — I’ll always get a ticket.

2 Responses to “Review | ‘Nightmare Alley’ and the long con”