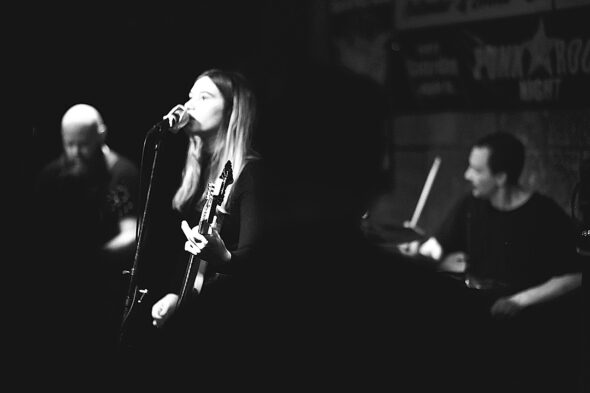 The final full moon of the year looms in the sky as I stride into the famed Melody Inn, a renowned Indianapolis dive that’s been hosting “Punk Rock Night” every Saturday for over 20 years. The lunar backdrop is befitting the occasion: Dayton’s nascent “spooky punk” band, Houseghost, will haunt the stage in a couple of hours.

Part Misfits, part Ramones, with edgy pop sensibilities that allowed bands like The Offspring and Blink-182 to explode into the ’90s mainstream, this three-piece is worth getting excited about.

Their eponymous debut — released Oct. 23, 2020 — is as flawless an album as you’ll ever hear, with numerous standout tracks that possess undeniable crossover appeal. This may sound like hyperbole, and certainly art and taste are subjective, but rarely do form and content synthesize so fully. To put it another way: if we still lived in a pre-Napster world in which the major record labels retained power as gatekeepers of exposure, Houseghost would undoubtedly break through with this LP in a significant way.

There’s a reason I’ve made the drive from Yellow Springs to Indianapolis, after all. I’ve had this show marked on my calendar for months, and now I’m here to end the year on a high note. This is the band’s fourth and final show of 2021, and I was lucky enough to catch two of the first three.

Based on those previous experiences, my expectations are high above the stratosphere. After ingesting a tallboy, a pizza and the opening set by Indy-based punkers Covert Flops, I settle in for Houseghost’s slot. Drummer Tyler Beaty (Goon, Break Yourself) counts off the band’s first song of the night, “No Fun Summer,” and guitarist/vocalist Nick Hamby (The Raging Nathans) rips the opening chords as bassist/vocalist Kayla Hamby croons into the mic. After a four-bar intro by the Hamby siblings, Tyler bursts in with the drums. We’re off to the races.

In true punk rock fashion, the band blazes through its set of two- to three-minute songs with a polished efficiency. This, coupled with the trio’s apparent onstage comfort, stands out to me; this is a band that was essentially sidelined by the pandemic a mere 18 months after its members’ first practice, and again — this is only the group’s fourth show of the year. On one hand, I guess it shouldn’t be all that surprising, as Nick and Tyler have been playing in bands for years. Nick shreds on guitar; his melodic leads are often hypnotic, and he carries himself like a man who has clearly been doing this for a long time. Tyler’s ease behind the drum kit conveys the sense that he’s been here before, his driving beats tight and on point as he sits in the pocket.

On the other hand, this is Kayla’s first band, but you would never know it by her stage presence.

Whether she’s belting out one of her own songs or providing harmonies for one of Nick’s, she does not shy away from the microphone, and she grinds her bass with an effortless cool. In fact, at one point between songs, the strap of her bass broke, rendering it unplayable. After quickly procuring another bass from a fellow bassist, she played on as if the incident never happened.

Perhaps all of this can be attributed to having an old soul; maybe, as she snarls on her track “Marceline,” she really is “a thousand years old.”

At some point in the middle of their set — probably during “Book of Shadows,” which I would put on my own “High Fidelity”-esque list of “Top 5 Side Ones, Track Ones” — I am overcome with a sense of gratitude for having ever seen Houseghost live at all. This was supposed to be a secret recording project between Nick and Kayla, nothing more, and I’m bummed out by the thought of a world in which no one ever got to see or hear this band perform. Thankfully, they brought Tyler into the fold, and now we all get to reap the benefits. I wonder if others in attendance understand how lucky we are.

After closing with their eponymous track, Houseghost give thanks and pack up their gear, the energy of the brisk 11-song show hanging thick in the room. The crowd is lively and eager for more. Rumor has it that 2022 will provide not only more shows to come, but another album in the works. I stroll out into the cold Indianapolis night with the two-hour drive home ahead of me. No worries; that’s just long enough to listen to my freshly purchased Houseghost CD in its entirety a total of four times. I press play and drive off, the opening thunder roll of the album rumbling through my speakers, the full moon gleaming high above.