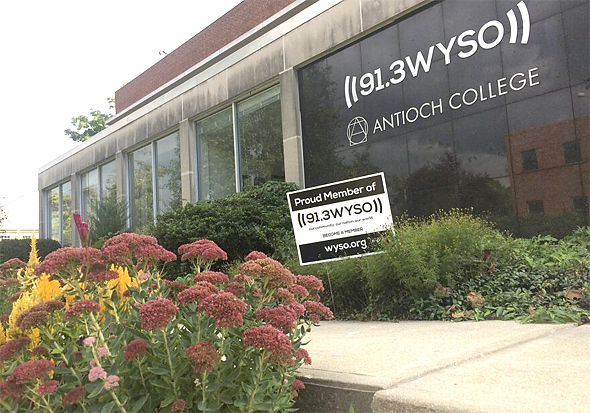 The Greene County Commissioners have awarded $25,000 to the Village of Yellow Springs in a Community Investment Grant, which the Village applied for on behalf of WYSO. (Photo courtesy WYSO.org)

The Greene County Commissioners have awarded $25,000 to the Village of Yellow Springs in a Community Investment Grant, which the Village applied for on behalf of WYSO.

The grant application, which was discussed at the Jan. 3 Village Council meeting, sought $112,000 to purchase equipment for the local radio station. In a letter to Council, WYSO General Manager and President Luke Dennis wrote that the grant request was a part of a larger ask to members of the community and Iron Table Holdings, which owns the building that will house WYSO in the future.

According to Dennis’ letter to Village Council, the grant money will be used to purchase new broadcasting equipment and have it installed, pay for the “highly specialized” acoustic treatments for the studio spaces and purchase new furniture for the WYSO team.

“The community investment grant could be the missing piece of the puzzle that completes the fundraising and makes the project a ‘go,’” Dennis wrote. “It guarantees that WYSO will remain in the village, contributing to the tax base with 22 full-time positions and counting.”

Dennis said that moving to the new space will put WYSO in the position to expand its team and continue to serve the region.

“We have run out of room in our current building,” he said. “We are looking to add five to eight positions over time.”

Council approved a resolution to apply for the funding on behalf of WYSO in lieu of a previously discussed grant application for monies for road improvements.

In its Feb. 8 meeting, the Greene County Board of Commissioners briefly discussed the matter before unanimously approving $25,000. Commissioner Tom Koogler said that the committee had a “lively discussion” when considering the Village’s request on behalf of WYSO.

“I think it worked out well,” Koogler said.

In a follow-up email, Greene County Director of Development Eric Henry said that the grant request was well-received.

“Every board member supported this project upon reviewing it and that level of support continues still,” he wrote.

Asked about the difference between the amount of money requested and the amount awarded, Henry said that the decision to grant $25,000 came down to a few members of the committee reviewing grant requests.

“A few of our more fiscally conservative board members felt that it was hard to quantify what level of funding should be awarded to a project with little to no job creation,” Henry wrote. “From a community-based project perspective, it proved difficult to fully appreciate how this new facility would expand WYSO’s ability to impact the community beyond current levels.”

Created in 2021, the Greene County Community Investment Grant fund was created “to provide financial assistance to jurisdictions for the development of sites and infrastructure designed to attract and sustain businesses.”

The grant is also open to projects that will improve a community’s quality of life, such as parks, shared community spaces and improvements to downtowns or main streets.

In 2021, jurisdictions requested over $1 million in grant money through 10 requests.

“This is still a new program and we continue to learn what the needs of the community are and what the appetite of our board is when it comes to which projects to fund,” Henry said. “A lot of these projects are hard to quantify using existing analytical models and software.”

In addition to the difficulty of quantifying the impacts of projects, Henry said that the board also considered WYSO’s ability to fundraise from other sources.

“WYSO certainly has a large cultural impact in Greene County, but how does this translate into dollars and how much of this should fall to Greene County to fund?” Henry wrote. “This grant was not the only means of our support for this project.”

In a follow-up interview with Dennis, he said that he was grateful that Greene County gave any funding at all.

According to Dennis, WYSO will look into other funding sources throughout the year in order to pay for the project.

“The Community Investment Grant was just one request,” he said. “We are trying to raise $2.1 million total.”

Currently, WYSO is looking to secure grant funding from the state of Ohio through the Dayton Development Coalition’s Priority Development and Advocacy Committee, or PDAC. According to Dennis and Henry, the Greene County Commissioners wrote letters in support of WYSO’s work to secure funding from additional sources.

“We also supported and championed WYSO’s PDAC request of $1 million dollars under the ‘Quality of Life’ category for this project,” Henry said. “The WYSO project has a diverse capital stack from a variety of contributors. I think that speaks very well of this project and I remain positive that Luke and his team will secure the remainder of their funding though other sources.”

Dennis said that the Dayton Development Coalition has given WYSO priority status for their PDAC application, which puts them in a good position to receive funds through the state, although they may not receive the full $1 million.

“We have raised $1.3 million so far and we are working on inviting developers and lawmakers into the space to help them understand why this is good for the community,” Dennis said. “It takes all kinds of gifts.”