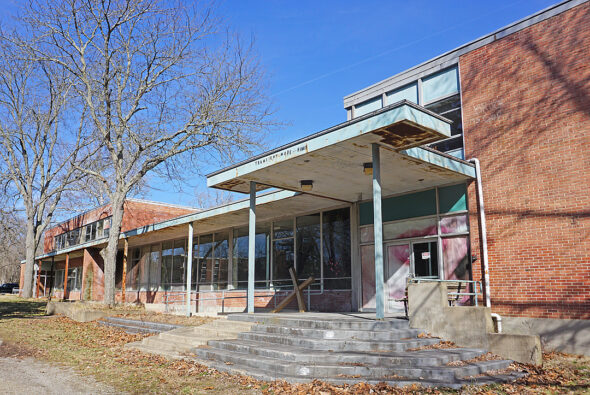 Through a state grant program providing funds for demolition of residential and commercial properties, Antioch College will receive just over $100,000 to aid in tearing down the 65-year-old student union building, which has been eyed for demolition since 2013. The college aims to save the building’s “stoop,” pictured. (Photo by Jessica Thomas)

Antioch College is slated to receive just over $100,000 from the State of Ohio to help fund the demolition of its original student union building. The grant comes via the Ohio Building Demolition and Site Revitalization Program, which was launched in December of last year.

The program, administered by the Ohio Department of Development, was funded as part of House Bill 110, last year’s biennium budget bill. Through the program, a minimum of $500,000 was offered to all of Ohio’s 88 counties for the demolition of both residential and commercial properties.

The $500,000 allotted to Greene County is administered by the County’s Department of Development. Municipal governments were responsible for forwarding applications for suitable projects to the County.

Bob McKee, Antioch College’s vice president of finance, told the News last week that Village Manager Josué Salmerón encouraged the college to consider one of its buildings for a demolition grant, and submitted the grant application on the college’s behalf.

“The Village and the college worked together to seek the funds,” he said.

Salmerón, who also spoke to the News last week, said he was alerted to the grant funding in January, but that no program guidelines were available at that time. In anticipation of a “competitive” field of applications, he said he put in some “preliminary work with the County” before the application process began. Out of 11 applications countywide, the student union demolition project was one of eight to be selected for funding.

The former student union building was built in 1957, and has been eyed for demolition since 2013, when the college announced it would be torn down. Reasons for its planned demolition included “extensive mold and large roof leaks, resulting in extensive damage,” according to an announcement from the college in October of that year. No proposed date was set at the time of announcement due to the high projected cost of demolition, according to a November 2013 News report.

McKee said the college identified the student union building as a possibility for the grant because it is “obviously in need of demolition.”

“Where it borders several village residences, it’s a concern for us,” he said. “We’re looking forward to continuing to revitalize the campus, not only for us but the whole community.”

According to McKee, the college was given verbal notification from the County that the funds would be paid out in June of this year; according to the terms of the grant, demolition must be completed by May of 2023. He added that the grant won’t cover the cost of demolition in its entirety, and that the college will need to raise additional funding to complete the project.

McKee said the college aims to work with the Village in order to ensure an “open and transparent process for info distribution,” and that Antioch College President Jane Fernandes will create a task force to obtain input on what’s next for the site of the demolished building.

“We’re going to do our best to be a sustainable campus,” McKee said.

Salmerón said the Village had considered another property — a residence on South High Street — for demolition funding, but decided against it as its owners have already engaged a contractor for its demolition.

“I don’t think the County would have been as supportive [of demolishing the High Street property] because it’s residential and it was going to be demolished either way,” he said.

Greene County Development Director Eric Henry told the News this week that the demolition of the student union building was chosen for funding “because of its redevelopment value to the village and its residents.”

“Our department has a great relationship with Josué and the Village team, [who] were able to get us the information we needed to put together a strong application,” he said. “We are particularly grateful for the assistance of Johnnie Burns, director of public works, who fast-tracked our department the information we needed to submit to the State on time.”

Henry said that the County itself will “put up the costs for the [demolition] projects,” with the State to reimburse the funds, adding that the “numbers are still subject to change until accepted by the state.”

Other Greene County properties selected for demolition grants are in Beavercreek, Caesarscreek Township, Cedarville, Fairborn and Xenia. At $102,438, the funds for the student union demolition are the third-highest to be allotted by Greene County, behind $126,482 to tear down an industrial building in Cedarville and $126,761 to remove the building that housed Fulmer Supermarket, which closed in 2010, in the Xenia Towne Square shopping complex. Both of those properties will also require matching funds from other entities in order to fully fund demolition.