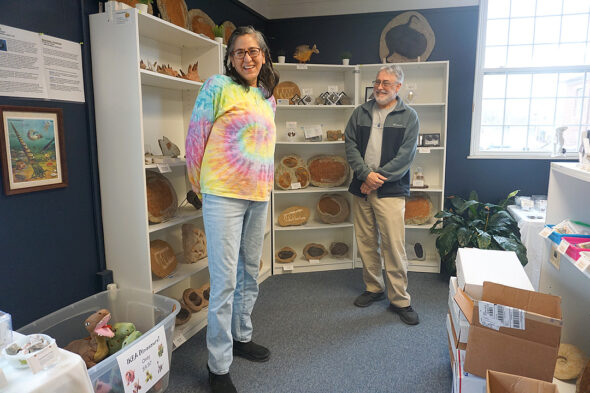 Villager Eric Clark, right, recently closed his Dayton Street shop, Rock Around the Clark, after selling its stock of thousands of fossils to Fairborn resident Frances Coynes, left. Coynes will sell the fossils in her downtown Fairborn store, Coynes Crystals, and in downtown Yellow Springs as a street vendor. (Photo by Lauren "Chuck" Shows)

A downtown store that traded in prehistoric wares will soon join the ranks of history itself: This week, villager Eric Clark closed the fossil shop, Rock Around the Clark, after selling its stock to Fairborn resident Frances Coynes.

On March 11, Clark posted to his Facebook page: “For $18k cash, this amazing collection, shelves, some equipment is yours! … Tempting, isn’t it?”

For Coynes, the temptation was clearly too much to pass up; the next day, Clark posted again to his Facebook page to announce that Rock Around the Clark had a buyer, and that its Dayton Street storefront would discontinue sales by the end of the day on Sunday, March 13.

Rock Around the Clark opened in the summer of 2020, but Clark and his wife, Jackie Clark, have owned the collection of thousands of fossils even longer. The couple bought it from David and Scott Cain in 2015; the collection itself was collected over a period of 40 years by the Cains’ father, the late Larry Cain, who had lived in Middletown.

In 2020, the Clarks told the News that their intention when buying the collection was originally to sell it as a unit, but that it was too large for a single buyer. They made their way through some of the fossil stock by selling at trade shows and street vending in downtown Yellow Springs for several years before opening the shop.

“When [Rock Around the Clark] opened, it was immediately a closing sale,” Clark told the News this week, noting that many of the items were priced below market value with the intention of selling the stock quickly.

Coynes, who also spoke to the News this week, is the owner of Coynes Crystals in downtown Fairborn, which she runs with her niece and business partner, Crystal Gibson. The store, which trades in gems, minerals and handmade jewelry, opened in 2019. Coynes said she has been buying fossils wholesale from the Clarks’ collection for several years to sell in her own shop, mostly working them into the jewelry she crafts.

A native of Fairborn, Coynes said her interest in geological curiosities stems from her time as an amateur gem and mineral miner in Arizona, where she spent 15 years. Before opening her shop, Coynes got her start selling her wares — many of which she had mined herself — at trade shows and as a street vendor in downtown Yellow Springs. She continues to operate under a tent downtown in good weather.

“I met Eric when we were all setting up down on the corner of Xenia and Corry,” she said, noting that Coynes Crystals moved its outdoor business to the Trail Town Brewery parking lot during the pandemic.

“I was fascinated by [Clark’s] products — it kind of went hand-in-hand with our gems and minerals,” she said.

Clark and Coynes, who consider themselves both colleagues and friends, said their businesses have developed something of a symbiotic relationship over the years.

“I put his cards on my table and he put our cards in the shop — we supported each other’s businesses,” Coynes said.

Clark added that Coynes and Gibson had lent a great amount of aid to his business when it was first starting out, helping Clark establish an Etsy shop, walking him through the process of setting up a credit card sales account and directing their own customers to the storefront.

“They are the most wonderful people,” he said.

Coynes said years of working together made the sale a natural fit. Though Rock Around the Clark will be gone, Coynes assured the village’s fossil lovers that they will continue to have a place downtown to pick up trilobites, ammonites and megalodon teeth as she continues street vending.

“I’m never in the shop much — my thing is being out in Yellow Springs,” she said.

The Clarks hold a lease on the store’s retail space through the end of April, giving them some time to move the large collection of fossils out of storage — and Coynes time to make room for it.

Once the collection is gone, Clark said he and his family will be making up for “a lot of lost weekends” by spending time together.

Though he said he has no plans for a new business venture — he continues to maintain two rental properties — Clark didn’t totally write off the possibility.

“I’m sure somebody will talk me into something,” he said.