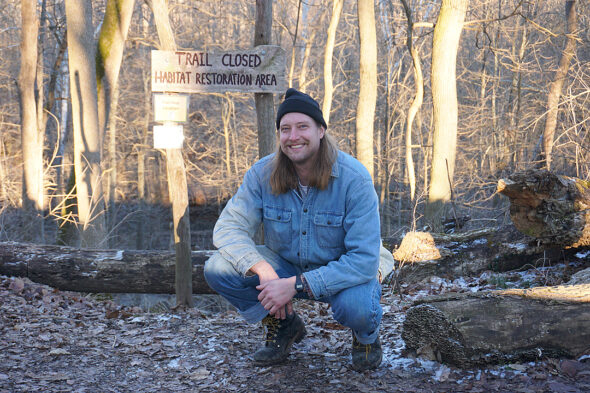 Since he stepped in as Glen Helen Nature Preserve’s newest land manager last May, 31-year-old Zach Bollheimer has had no shortage of tasks and challenges: from maintaining the 15 miles of trails and curbing the spread of invasive species, to envisioning a healthier future for the preserve’s native habitat. (Photo by Reilly Dixon)

On a chilly evening in late February, land manager Zach Bollheimer surveyed the Inman Trail in the Glen Helen Nature Preserve one last time before calling it a day.

Against the fading light, he crossed the boardwalk over the Yellow Springs Creek, where hours earlier, the beaver dam had sprung a leak. Bollheimer observed a patch of skunk cabbage proudly poking through the creek’s lowered surface. The starts of native irises were visible, too.

Bollheimer knew the beavers would return that night to patch things up, and that the creek would again rise to the verges of the boardwalk. He’d have to come up with a solution soon.

Farther up the trail, Bollheimer checked on an oak sapling, making sure its cage was still secured. On another wooden walkway, his boot caught a loose board; he’d return the next day to hammer it down. Up ahead, a towering ash threatened to fall with even the slightest breeze. Another thing on his list.

“It’s all about prioritization,” Bollheimer said with a laugh.

Throughout his eight-month tenure at Glen Helen, the new 31-year-old land manager has yet to find himself with much idle time.

It is, after all, a lot to look after: The Glen contains over 1,100 acres of land and a 15-mile network of footpaths. It’s home to deep-seated Indigenous histories, untold numbers of flora and fauna, geologies and ecologies, waterways and wildlife.

Today, the Glen boasts of being the largest and most-visited private preserve in the region, bringing more than 100,000 visitors annually from southwest Ohio and beyond.

“I see it all — the entire Glen — as just one big project that’s made up of smaller, never-ending projects,” he said. “And dealing with all those projects often feels like a game of whack-a-mole.”

Bollheimer explained that his strategy for playing that daily game is largely informed by what he calls “systems-based thinking.”

In other words, he tries to take a bird’s eye view, seeing the challenges and the needs of the land not as isolated incidents, but rather as interconnected and ecologically entwined.

“All of the Glen’s systems interact with one another,” Bollheimer said. “The hydrologic system, the nutrient exchange system, the soil biology, the way the geology changes over time, even visitors coming to the Glen — it’s all a part of a bigger ecosystem. Everything is interacting with one another to remain healthy: from the tiniest microorganisms to the massive trees and everything in between.”

As land manager, Bollheimer said his overarching goal is to oversee those natural processes, ensuring the health and functionality of all involved. 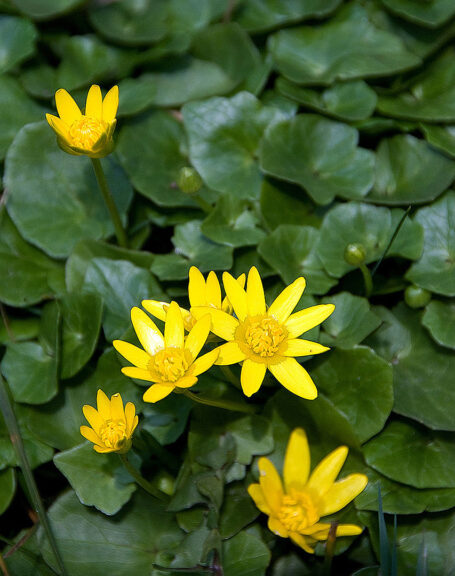 Bollheimer stressed the ecological devastation being wrought by an invasive species that has a growing foothold in the Glen. Lesser celandine, distinguished by its yellow flower petals and spade-shaped leaves, is one of the first wildflowers to bloom in the Glen, according to Bollheimer. Like many invasive species, lesser celandine monopolizes nutrients and proliferates quickly. It spreads through waterways, and as such, can be spotted along creek, stream and river banks.To help curb the spread of lesser celandine in the Glen and surrounding areas, contact Bollheimer at zbollheimer@glenhelenassociation.org.

Much of Bollheimer’s labor is season-dependent. As expected, his work over the last few winter months has varied greatly from when he came on the job last May.

“It was garlic mustard season then,” he said, referring to an invasive species that has proliferated throughout the Glen in recent years. “I’d have to cut it twice so it wouldn’t reroot or go to seed.”

Now fully in the throes of winter, Bollheimer’s current work is more logistical.

For instance, he had to close the Glen to the public several times this month — an annual conservation practice for the Glen, but a first for Bollheimer. Following the snowstorm two weeks ago, whole swaths of the trail system iced over. Then after the recent thaw, the trails became too muddy, which according to Bollheimer, often leads to visitors accidentally trampling on wildlife along the paths.

“Our trails have widened by two feet over the last two years,” explained Bollheimer. “Two feet multiplied by however many miles of trails is a lot of ecological damage.”

Bollheimer said he knows it won’t be long until the seasons change, and with warmer spring temperatures come the first shoots of the Glen’s invasive species — and chief among those are honeysuckle, lesser celandine and that pesky garlic mustard.

“That’s what I’m gearing up for again,” Bollheimer said. “Right now, I’m psychologically preparing myself to be out there spot spraying and catching all the stuff right as it comes up. So, I’m making sure my tools and sprayers are all primed and ready to go.”

All in all, Bollheimer is still getting his systems organized.

“You know, so I can best whack as many moles as possible,” he said.

A manager in the making

Bollheimer comes by his love for land stewardship naturally. He grew up in Fort Loramie, Ohio, a small rural town north of Dayton, which he described as ecologically similar to Yellow Springs — it has wide open fields, farms and floodplain forests that he found were ripe for romping around and exploring as a child.

After graduating high school in 2008, Bollheimer studied environmental geography at Ohio University. In his junior year, he landed an internship working for the Ohio Environmental Protection Agency doing wetland mitigation with the agency’s division of surface water. By his 2012 graduation, Bollheimer had honed his proclivity for seeing the world in terms of systems and interconnected relationships.

“I just loved learning how to understand not only how water flows, but where it goes, what nutrients it picks up along the way and where it takes those nutrients,” he said. “That kind of stuff continually blew my mind — and now here I am, still thinking in those terms.”

In the decade since his college graduation, employment and vocational opportunities have whisked Bollheimer all across the country. Over a three-year period, he restored endangered salmon habitats with the Washington Conservation Corps in Port Hadlock, Wash.; worked for a brief stint on an organic dairy farm; and was a crew leader for Kentucky’s Cumberland Gap National Historical Park, where he managed invasive hemlock and dabbled in peregrine falconry.

He also worked for two years as the stormwater manager for the Licking County Soil and Water Conservation District in Newark, Ohio. Later, his water work spilled into wetland and stream consultation for the Westerville-based firm MAD Scientist Associates.

“No matter where I went, where I worked, I kept seeing systemic issues,” Bollheimer said.

Taken together, all of Bollheimer’s past employment and pursuits made him an attractive candidate for the Glen land manager position. He said his “systems-based approach” to overseeing projects and stewarding native habitats were likely what sealed the deal.

His employment with the Glen came on the heels of a transitional time for the nature preserve.

Bollheimer’s most recent predecessor, Ben Silliman, had left his post as land manager in February 2020. That was shortly before Glen Helen closed to the public the next month due to safety concerns related to COVID-19.

Then, a little over a week later, Antioch College — which still owned the nature preserve — furloughed 27 employees, including eight of 11 staff at Glen Helen, and reduced hours and salaries for other college workers. At the time, the fate of the Antioch-owned Glen seemed uncertain.

In June 2020, the Glen Helen Association and Antioch struck an agreement: the GHA, a separate nonprofit that’s worked for more than 50 years to benefit the Glen, purchased the preserve for approximately $2.5 million, an amount payable to the college over a 10-year period.

The transaction was finalized in early September 2020, and by the middle of the month, the GHA reopened the preserve to the public.

Additionally, the nonprofit restored a “small but mighty” staff, as previously described by Executive Director Nick Boutis. That included Boutis’ position, an associate director, a director of the Outdoor Education Center, a maintenance manager, a ranger, a director of the Raptor Center and a modest group of volunteers.

It would be another eight months before Bollheimer arrived on the scene.

“When the GHA purchased the Glen, we inherited a lot of faltering infrastructure,” Bollheimer explained. “It all needed — and still needs — quite a bit of help. Right now, we’re doing what we can to revitalize that infrastructure.”

“A lot of what I’m doing now is trying to strategize how we can be most effective with the limited staffing we have,” he added.

Bollheimer is optimistic about what the coming year has in store for Glen Helen.
As previously reported in the News, the Glen received a $988,119 grant from the Clean Ohio Conservation Fund — money that is earmarked for a number of improvements in and around the nature preserve.

Whereas more than half the grant will finance the demolition and site remediation of the old Antioch College power plant, Bollheimer said much of the remaining funds will be used for improving trail infrastructure.

“That largely means repairing, replacing or improving our bridges and boardwalks,” Bollheimer said. “People can expect to see improvements made on the boardwalk next to the beaver dam and on the bridge over the Cascades.”

Bollheimer said he hopes to put his passions for trail design to use. He believes the Clean Ohio grant money could allow him to reroute some of the preserve’s pathways — some of which currently come a little too close to floodplains for Bollheimer’s comfort.

In addition to putting the grant money to use and hacking away at burgeoning invasives, Bollheimer hopes to kick off a nursery project in the coming months. His goal is to propagate and foster native species he could use for habitat restoration throughout the Glen.

“Things like spicebush, different oak species and all kinds of wildflowers and spring ephemerals,” he said.

He explained that this project was born out of an idea he had when cleaning spots on the trails where wildflowers had encroached. Rather than disposing of the plants, he scooped them up, potted them and brought them back to his workshop.

Bollheimer admitted that his ambitions can sometimes get the better of him, and added that, in order for this project to really take off, he’ll need the helping hands of local volunteers for seed collection, potting, watering and eventual planting.

“I think everybody is a land steward,” Bollheimer said. “Every day, I’m directly impacting the ecological quality of the land — and anyone that wants to have that kind of direct impact should absolutely come out this spring and help me out.”

Although Bollheimer is eager to encourage direct, albeit supervised, participation in protecting and improving the native ecosystems of the Glen, he also believes people can have an impact in more subtle and indirect ways.

“Try to stay on our trails and just follow our rules,” he implored. “The natural systems of the Glen run deep here, and we can affect an environment more than we can ever fully understand — for better or for worse.”