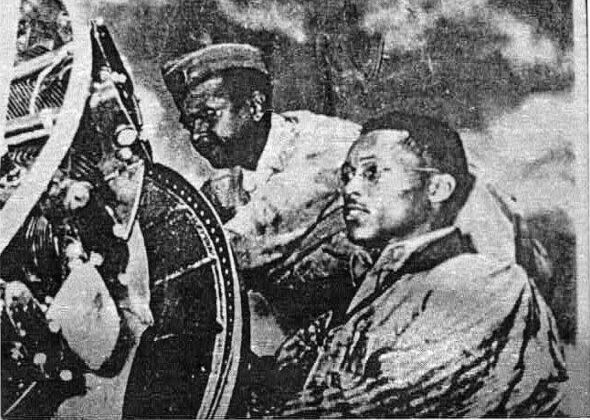 Omar Robinson, a Tuskegee Airman, pictured on the right during his tenure with the Army Air Corps. (Photo courtesy of Kevin McGruder)

A brief history of Omar Circle

One of the nation’s few housing subdivisions built by an African American developer is nestled in a location that spans 21.2-acres and includes houses situated across the street from Yellow Springs High School, and just down the road from Gaunt Park.

In 1953, Omar Anthony Robinson, a former Tuskegee Airman and electrical engineer working for Wright-Patterson Air Force Base, purchased farmland from a Black farmer named Leo Shorter. With loans secured from a bank in Richmond, Ind. — Robinson’s hometown, from which he made the long commute to work every day — the idea for Omar Park Estates, known to the community as Omar Circle, was born.

A total of 58 houses were built in three phases over the course of 20 years. The first houses, including Robinson’s, were built along East Enon Road and West South College Street. In 1957, a second phase of housing was developed, and a third phase, begun in 1961, was completed in the early 1970s.

According to the booklet “Omar Park Estates Reunion, Circle of Love,” written about the families who first lived on Omar Circle and in commemoration of an Omar Circle reunion that took place in 2016: “Robinson’s intentions for the land was not only to build a residence for himself, but one that involved developing the land and subdividing it for sale to other buyers, who like he, worked at Wright Patt, but could not find home ownership near the base because of being shut out of some communities.”

Robinson and another future Omar Circle resident, William Ross, carpooled to the base from Richmond along backroads that extended their drive to about 90 minutes, since U.S. Route 70 had not yet been constructed. Ross, a former combat engineer during WWII, was the first African American locksmith and logistics manager for Wright-Patterson Air Force Base. The two made the long commute because they could not find adequate housing for their families, or developers willing to build for African Americans.

A haven for Black families

Antioch professor and historian Kevin McGruder currently lives on Omar Circle and has interviewed many of the neighborhood’s original homeowners. According to McGruder, the neighborhood was a rare opportunity for Black families.

“I do think that people saw it as an opportunity to realize their vision for a home in a place where they would be welcomed, rather than seen as threatening,” McGruder said. “I interviewed William and Thelma Ross a few years ago. Mr. Ross built a home in Richmond, he and friends — he was an amateur builder. He told me that white people in Richmond, once they built the house, told them it was too good for them, and they made him sell it.”

McGruder said he had to contextualize the implications of his interview subjects’ experiences to his research assistant, Mary Evans, explaining that the gentle way they relayed the story belied the danger, and warning not to be fooled by the Ross’ “Hoosier niceness.”

“[They are] the nicest couple you ever want to meet — I had to remind her that the Klan was based in Indiana, that was their headquarters and may still be, for all I know,” McGruder said.

Former village resident Janmichael Graine lived on Omar Circle in the 1960s and ’70s, from third grade to 10th grade, when he and his brother moved to live with their uncle following the deaths of their parents. A decorated Army veteran now living on the east coast, Graine said his father, Dennison Graine, and longtime villager George Britton were 1958 Howard University graduates and engineers, and were both recruited by Wright-Patterson Air Force Base.

Graine told the News about the difficulties that Britton and his wife, Evelyn, had in finding housing, describing a racist experience when they were looking for a realtor.

“Mr. and Mrs. Britton were looking for a home in Huber Heights,” Graine said. “As they sat waiting for their turn to meet the realtor, one yelled ‘Oh no, we let that kind in?’ to another realtor — of course, saying it so they could hear it. Mr. Britton just said to Evelyn, ‘Come on, let’s go.’”

McGruder surmised what Omar Circle may have meant to the founding neighbors who experienced so much discrimination.

“I think Omar Circle meant for [the Ross’] and other couples [that] here they could spread their wings and build a house they could afford — it’s not like they were overspending,” he said.

“Almost every family was a two-income family, because Black women worked mostly — they were trying to live like everyone else. Like white people expect, and take for granted that they can do.”

At least during the early phase of construction, building was a community effort and likened to “old fashioned barn-raisings” in the reunion booklet.

“A number of the initial families there, each one of them had a skill set,” Graine said. “Someone knew how to do brick masonry. And someone knew how to do plumbing, and they each helped one another. Michelle Mason’s father, Gabby [known for his barbecue restaurant], he did the brickwork, Mr. Bill Ross laid tile, Mr. Robinson did the electrical work.”

According to McGruder, many of the neighbors would stay at each other’s homes on the weekends until their houses were completed.

“After work, they’d go do a little work on the house and then they traveled all the way back to Richmond,” he said. “And then sometimes they might work on the weekends and stay over at somebody’s house while they were there. So, it was a sense of community for those young homeowners.”

According to Graine, there was also a strict neighborhood covenant: homeowner’s association rules that the neighbors had to abide by. Some of the rules included homes not exceeding one and a half stories, or buildings having exterior cement or cinder block. No livestock or poultry was permitted either.

First, it was built by a Black developer.

“To this day, there are very few Black developers across this country — I can’t say how many, but that’s access to capital most Black people don’t have. You have to have enough money to buy things and sit on them, at least for a little while,” McGruder said.

Also unique is that the houses were built before the Fair Housing Act of 1968, a law making it illegal to discriminate against people attempting to rent or buy a home or seek mortgage assistance based on race.

“Predominately Black homeownership … they really demonstrated what Black people can do when the barriers are lowered to fair housing, which still has not been lowered in spite of the law,” said McGruder.

McGruder also said that housing discrimination is difficult to document, because “people can come up with any reason they want to for not doing something.”

The third point McGruder made was about the culture of the neighborhood from a Black perspective.

“I don’t think many white people appreciate how enriching it was to grow up in an affirming Black neighborhood,” he said. “The flip side, too — and I’ve talked to people who grew up there — is that white kids were all on the block, in people’s houses. They don’t realize it, but this is real integration and they’re seeing their friends are Black and it’s no big deal. There are some white children that move in later, so I think they benefit from that type of experience too.”

McGruder added that predominantly Black communities in the United States continued to be held back by housing discrimination.

“Black neighborhoods would be strong if housing discrimination wasn’t happening,” he said. “You don’t need white people for that, you just need people being treated fairly. And if white people want to live there, good, but if they don’t that’s good, too.”

Both Graine and McGruder said that current resident James Felder told them that Robinson had been accused by some members of Village Council of not selling land to white people. In fact, Robinson had sold one of the first plots to a white teacher named Mr. Fry.

“One of the white residents came to Omar and — again, this is from Mr. Felder — said, ‘hey, I’m going to do you a favor. I will come out and purchase a lot there so we can integrate, but what you need to do is just lower your price.’” Graine said. “And basically Omar said, ‘No, the price is the price. The same for everyone.’”

Graine said advertising for Omar Circle was mainly by word of mouth, and that many of those who bought homes there worked at the Air Force base. At the time that the land was purchased for development, the opposite end of town was “where all the activity was,” according to Graine, before the high school was built at East Enon Road and while Gaunt Park’s land was still being used as a dump by the village.

“Bryan High school was downtown, and the elementary school,” Graine said. “Of course, there was the downtown area — there was no planning for a new high school out there. The hill we go sledding down in the wintertime was the town landfill. I’m just speculating that piece of property wasn’t as high value as it is now.”

By the time Graine reached high school in the 1970s, a new school was built near his home, and Gaunt Park was open.

“When I was going to high school, I had just 100 yards to walk to school, I could go up to Gaunt Park and go swimming. So now, it’s a great location,” he said.

Other than a scant sentence or two going back to the 1950s, and a more recent article in 2016, there is very little information to be found about the history of Omar Circle in the YS News archives. Documentation is also hard to come by in other local sources, including archival records at Antioch College.

Efforts to fill the informational gap, however, are currently underway: Graine said he is working on an article about Omar Circle that he hopes will be published in the Lincoln University Press. One of the earliest historically Black colleges/universities, or HBCUs, Lincoln University has a Yellow Springs connection. According to Graine, one of Lincoln’s first presidents was named after Antioch College’s first president, Horace Mann. That president, Horace Mann Bond, was the father of civil rights activist Julian Bond. The Bonds were also related to one of the original neighbors of Omar Circle, the Childs family.

McGruder is currently conducting research on the history of Black developers in the United States, and during his own research into the history of the neighborhood, McGruder has found data via visits to the county auditor’s offices. He speculated that while Black villagers recognize the historical importance of a unique neighborhood like Omar Circle, white people may not, perhaps accounting for the lack of information currently available.

“Because it’s a subdivision — I didn’t realize how unique it was until I started looking for examples across the country,” he said. “I’m not saying they don’t exist, but I haven’t been able to find many.”

4 Responses to “A brief history of Omar Circle”