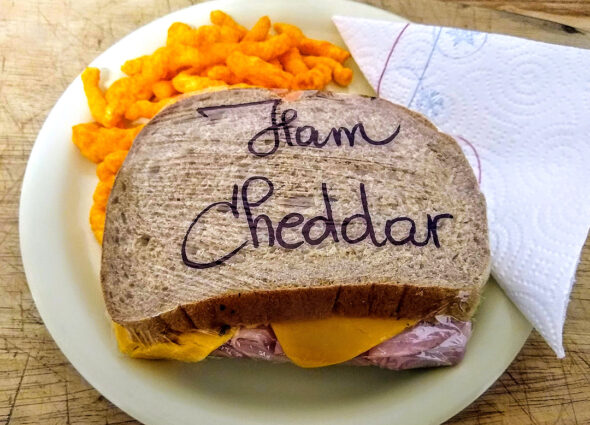 All I Care to Eat | Ham, cheese and memory

A couple of years ago, I started writing a new column, “All I Care to Eat.” Following a previous occasional recipe column, “Thought for Food,” I thought it might be fun to write about the dishes produced by local eateries that I love enough to convince me to leave my home comforts in order to eat them — or at least bring them home in a to-go container.

The News published the first installment in this new column in January of 2020. We all know what came next.

More than two years later, it feels OK — with enough (metaphorical) space — to return to writing about favorite foods, even as the world is still figuring out how it’s going to turn.

I had the best sandwich of my life in the summer of 1993.

I was 9 years old, and my dad had just installed a cheap, above-ground swimming pool in our backyard. We lived in Jonesville, Ky., a rural community of about 150 people at the time. My sister and I would cut across a neighbor’s backyard to get to Jonesville Grocery — really a glorified general store — and buy Pepsi, Cheetos and three-for-a-penny Tootsie Rolls.

One fateful summer day, we bought sandwiches from the deli counter, which we toted back home and placed on a shelf in a derelict refrigerator that sat, doorless — you know, for safety — between the shed and the new pool. After a long swim, I ate my sandwich — ham and longhorn cheddar with mustard on white bread — and I have not, in 29 years, eaten a sandwich that good since.

But I’ve eaten one almost as good, which brings me to the ham and cheese sandwich at the Emporium. My sandwich tastes haven’t changed much since childhood, as I am still partial to ham and cheddar, though I have been known to also partake of a good roast beef and provolone.

There are fancier sandwiches out there, no question, but the sandwich formula is, in my opinion, best when kept at its simplest. You throw anything else on there, and you risk upsetting the harmonious balance of meat, cheese, in-house-baked wheat bread and lettuce, all held together by the signature garlic mayonnaise, otherwise known as God’s Perfect Condiment.

I’m not usually jazzed about sandwiches in general; historically, they were what I had for lunch most days in school. They’re often cheap, quick and easy to make, a food you eat at home or at work when you don’t have time (or money) to enjoy a meal. At Thanksgiving, they’re what you make with the dry, leftover turkey that you are, at that point, tired of eating. They’re about the most utilitarian meal I can think of.

I’ve tried, over the years, to recreate that sandwich from nearly 30 years ago. Different breads, cheeses, hams and mustards have cycled through my various homes, getting sort of close, but never quite there.

Memory is a strange thing. When it comes to something as subjective as taste, I’ll never be sure that my memory is accurate. I had a favorite dress when I was 9. I can’t remember much about the dress now, except its color — seafoam green, my favorite color for years — and the way I felt when I wore it. If I could see the dress now, with grown-up eyes, would I feel the same?

Of course, I can’t really remember the taste of that perfect sandwich, either. I guess I’ve always assumed that, were I to one day stumble on the precise, alchemical combination of ingredients that were used all those decades ago, I’d just know it in my taste buds. What do I really remember about the sandwich?

I remember that it was a hot summer day, and I had my own swimming pool, which I could use at my leisure. I floated on my back, with my ears submerged, and listened to nothing and saw the pink tinge of my own closed eyelids as the sun filtered through. I got hungry — nothing makes you hungry like swimming — and ate a sandwich that I bought all on my own, the taste of young autonomy just about the most delicious thing I’d ever had.

Now I’m grown and have my own child — one who is currently struggling daily for her own sense of self. I haven’t been back to Jonesville for more than a decade, and then it was only to pass through. My sister visited in 2019 and reported that everything seemed so much smaller. Our old house was now an office for the Methodist Church next door, and Jonesville Grocery was permanently closed. Google tells me the population of Jonesville is now just 77.

All of which is to say: maybe the sandwich was just a sandwich. It was on white bread, after all. To paraphrase the Holy Bible, I was a kid, and now that I’m a grown-up, I have, to some degree, put away kid stuff — and there’s nothing like a fresh-baked wheat. It’s possible that the ham and cheese at the Emporium actually is, objectively, the best sandwich I’ve ever had. I’ll never know for sure. Tastes change, like everything else, and anyway, nothing will ever live up to my memory.

But when I’m hungry, and I’m feeling the heaviness that sometimes comes implicitly with having put away kid stuff, I grab my favorite sandwich at the Emporium, and I get a little bit of all those memorable flavors back: warmth, weightlessness, freedom, self-reliance, ham and cheese.