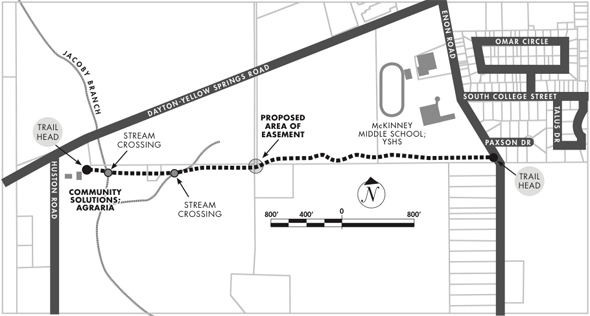 Members of Agraria staff have been working to come to an agreement with Gary Shorter, who owns a stretch of property along the proposed path, named Mary’s Way, between Yellow Springs and Agraria. To meet the condition of the Clean Ohio grant Agraria received in December 2020, they must have an easement on about 1,000 sq. ft. of Shorter’s property to ensure the public can access the path at all times.

When the Arthur Morgan Institute for Community Solutions purchased the farm that would become Agraria, it set out on a mission to serve and educate the community. Part of that mission meant creating a pathway for students and community members to traverse the space between the village and Agraria.

But for now, that project is being held up by one resident who has been unwilling to negotiate an easement with Agraria so the path, Mary’s Way, can cross their property.

In a recent interview with the News, Susan Jennings, the executive director of Agraria, and Megan Bachman, assistant director of Agraria, explained that the organization has been trying to come to an agreement with landowner Gary Shorter, whose land the path would cross, since Agraria received a $500,000 Clean Ohio grant to help with the cost of construction.

Mary’s Way, named after the late Mary Donahoe, covers land that was donated by Derick Donahoe, land on Agraria’s property and land purchased from Yellow Springs School District by the Village of Yellow Springs.

“[Shorter’s property] is the only private property that we would have to cross,” Bachman said.
If constructed, Mary’s Way would allow students from Yellow Springs schools to safely access Agraria on foot in order to commune with nature, complete classwork and learn about the farm’s regenerative practice model.

“It’s a public path for everyone to use,” Bachman said. “It’s the people’s path.”

Shorter had previously agreed to negotiate an easement that would make the land public, according to a letter Shorter wrote to the Ohio Department of Natural Resources in support of Agraria’s grant request. The letter reads, in part:

“As owner of the property just east of Agraria, I am open to negotiating an easement on my property in exchange for compensation, should Community Solutions receive grant funds.”

In addition to compensation, Shorter’s letter said that the easement agreement would include language about signage indicating that the trail was passing through private property and a gate to deter traffic from going on to his property. Jennings said in December 2020, that Agraria agreed to the signage and negotiated $30,000 in monetary compensation with Shorter.

Because they believed that Shorter would follow through with the agreement, Agraria has already made moves towards clearing and constructing the trail. So far, over $300,000 has been invested by Agraria and its partners such as the Yellow Springs Schools and the Village of Yellow Springs, which spent $60,000 in municipal funds to purchase land on Agraria’s behalf.

Jennings said that representatives from Agraria, members of Village leadership and neighbors such as Donahoe have reached out to Shorter, to no avail.

“We did not hear back from him and, at some point, he wrote that he could not sign the letter,” Jennings said. “I said we would like to understand why, so for several months, we have offered mediation and to meet with the neighbors to try to understand what the challenges were.”

According to Bachman, Shorter recently attended a meeting between Agraria representatives and neighbors in March of this year, but he has not agreed to meet individually to discuss the easement. Shorter did not respond to calls for comment from the News.

According to the terms of the grant, Agraria must have documentation saying that the bike path would remain public property.

“We really need to have some kind of written agreement in place within a few months,” Jennings said. “So we’re really concerned.”

Without the easement, Agraria could lose the $500,000 Clean Ohio grant. Jennings said that

Agraria has been granted a one-year extension to begin construction, but that extension ends in August of 2022.

“We understand that bike paths often cause neighbors concerns,” Jennings said. “But we don’t want to let our partners down.”