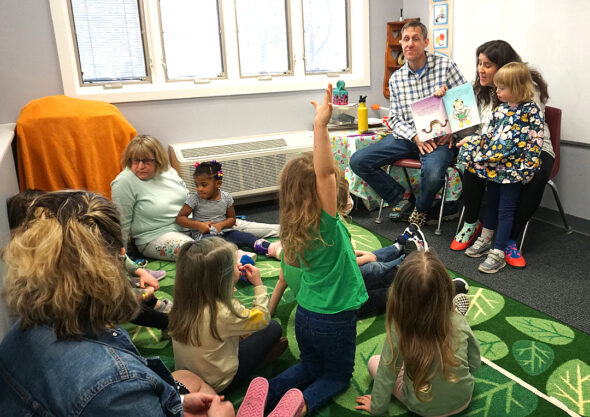 Mike Anderson and Katie Warber helped students in the school’s morning and afternoon classes celebrate at story time by reading Amy E. Sturkey’s “‘D’ is for Down Syndrome,” which uses each letter of the alphabet to introduce young readers to aspects of life growing up with Down syndrome.

Anderson and Warber’s daughter, Poppy, pictured in Warber’s lap, is a student at the preschool, and the two helped organize the event to celebrate Poppy and her classmate, Judah, both of whom live with Down syndrome. In addition to story time, Anderson and Warber also gave each student a different children’s book aimed at celebrating diversity and inclusion. Under the direction of teacher Janice Kumbusky (pictured at left), students also sang one of Poppy’s favorite songs, “Twinkle Twinkle Little Star.”

World Down Syndrome Day is celebrated on the 21st day of the third month — March 21 — to symbolize the triplication, or trisomy, of the 21st chromosome, which causes Down syndrome. The preschool celebrated on March 17, St. Patrick’s Day, ahead of spring break.

“They call people with Down syndrome ‘the lucky few,’ so celebrating it on St. Patrick’s Day seems fine!” Warber said.

Anderson and Warber distributed pairs of colorful, mismatched socks to students and staff — as well as to the News reporter on-scene. According to an informational sheet the two supplied to parents, wearing mismatched socks on World Down Syndrome Day symbolizes the karyotype of Down syndrome chromosomes, which resemble the incongruous footwear, and to show that “it’s OK when things don’t quite match, or if you have a little something extra.”