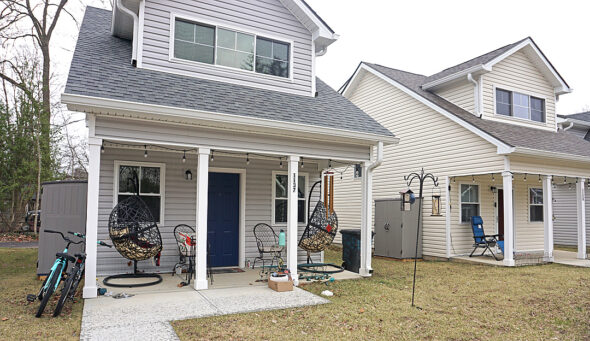 Six months of living in the Glen Cottages

Taking a slow amble up the sidewalk that runs down the center of the pocket neighborhood, one will notice the grass is coming up and flowers are slowly breaking the ground’s surface. A look to the left or right will feature porches with egg chairs, bicycles and a children’s water table. From one house floats the sound of jazz music; from another, the smell of cookies baking. Six months in, the residents of Glen Cottages are beginning to feel at home.

According to Home, Inc. Executive Director Emily Seibel, the Glen Cottages project officially started in December of 2018 with the purchase of the land.

Inspired by the Bowen housing needs assessment, the project’s goal was to “fill the gaps” in the village’s housing needs. The total project cost approximately $2.29 million, with 65% — nearly $1.5 million — of the total development cost coming from fundraising. The subsidies are used to make and keep homes affordable.

“We were inspired by people caring for one another and creating a neighborhood that creates a caring environment,” Seibel said.

Consideration of who would live in the homes and rental units was a leading factor in design, Seibel said. The homes are accessible or adaptable to accommodate people with disabilities. The site includes six homes that were purchased and six rental units.

“The six rental units are serving tenants with special needs, residents who have a qualifying disability or residents who are seniors,” Seibel said. “We proudly accept Section 8 vouchers, which has added another layer of affordability.”

“We wanted to invest in a real, felt sense of belonging and community,” Seibel said.

Several residents agreed to speak to the News about their experiences finding housing in Yellow Springs and what living in Glen Cottages means to them.

Looking out her front window, Patti Dallas watched her three grandchildren playing in the courtyard in front of her house. Dallas, who was born and raised in Yellow Springs, lives in one of the rental units in Glen Cottages. 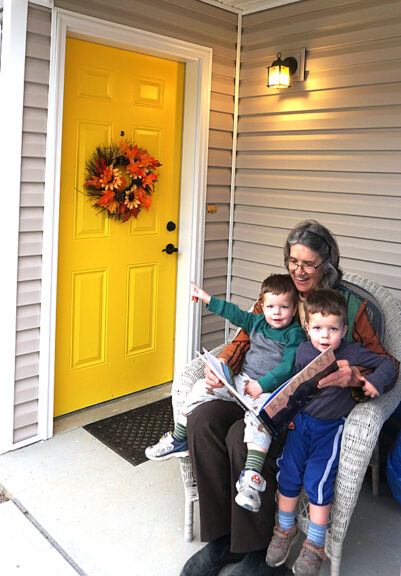 Sitting on her front porch that faces the shared lawn in the Glen Cottages pocket neighborhood, Patti Dallas read a book to her twin grandchildren, Silas and Ewan, 2. (Photo by Jessica Thomas)

“Yellow Springs was a great place to grow up,” she said. “I was away for a long time and I moved back in ’96.”

Since then, Dallas has held various roles in the village, doing video production work and serving as the coordinator for the Village’s community access channel in the late ’90s and early 2000s.

Recently, Dallas has been spending time with her daughter’s family, helping with child care. She said that she had been encouraged to place her name in the lottery for one of the units after working with Home, Inc. on some video projects.

“I was so excited when my name was chosen,” she said.

“It’s a small house but it feels very spacious,” Dallas said. “It’s very nice, the way it’s set up — we are near other people, but there’s still plenty of privacy.”

Dallas said she had some misgivings about living on Xenia Avenue; however, the design of the neighborhood alleviated her safety concerns.

“When my grandchildren come, they can just run around between the houses and it’s safe,” Dallas said.

As far as her experience six months in, Dallas said that the place is really starting to feel like home.

“Some of my friends gave me different things to include in the house and I was able to get some pictures out of storage that I hadn’t seen in a while,” she said. “It’s nice and bright.”

One of the things Dallas said she likes best is the ability to interact with her neighbors in a meaningful way.

“It’s very convenient to walk over and visit neighbors, or borrow something or whatever,” she said. “But winter and COVID-19 haven’t given us much of a chance to gather as a neighborhood. I really look forward to doing so.”

When the Gairys came to Yellow Springs to help care for aging parents, they did not expect a years-long housing search and a downsize from 10,000 sq. ft. to less than 1,100. After living close to the community in nearby Xenia, they learned from a friend about the Glen Cottages project.

The friend encouraged them to enter into the lottery for one of the units.

“This was a great opportunity,” Janice Gairy said. “One of the things that attracted us to Yellow Springs was that it’s a walkable community, and it’s a bicycle community. And we’re happy with the fact that we’re only seven blocks from downtown.”

Before moving to Ohio, the Gairys lived in New York and Minneapolis, where they worked in the advertising business. They are looking forward to getting involved in the community, particularly after taking a tour of the village. 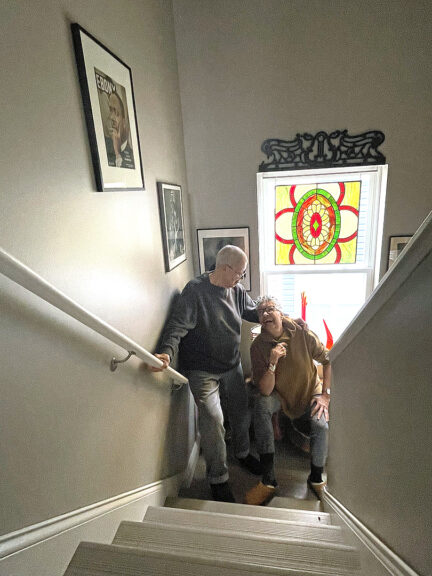 John and Janice Gairy stand on the landing of the stairwell in their home, which is decorated with art from their careers as a decorator and an advertising photographer. (Photo by Jessica Thomas)

“We got involved with The 365 Project after taking the ‘Blacks in Yellow Springs’ tour,” Janice Gairy said.

“We like to be a part of what’s happening,” John Gairy added.

In addition to community involvement, the couple said that they’d like to be a part of future Home, Inc. projects.

“There’s a lot of people with a lot of money wanting to live here,” said John Gairy. “But I’d like to see more things like this, more affordable housing.”

“I would really like to have some input if they ever have another pocket neighborhood or consider building one because the houses need a little bit more space and they need storage,” Janice Gairy added.

Despite the small square footage, the Gairys have decorated and adapted the space to fit their needs. During the installation phase, they were able to request a walk-in shower and a gas stove.

John has since added a pantry and both have worked to make the space theirs.

“John and I both love to decorate,” Janice Gairy said. “That’s what I did for a living. I did it in New York and Minneapolis. So when we moved into this space, this little tiny space, I said, ‘You know what, John? I’m gonna treat this as if it’s a project.’”

Adorning the walls are hand-woven African fertility baskets, framed photos from John’s photo shoots, and magazine covers featuring Angela Davis and other prominent Black figures. Tucked into a corner is an antique cabinet, and the sitting area features a coffee table passed down through the generations of Janice’s family.

“This was my grandmother’s library table,” Janice Gairy said. “It was a regular-sized table until we had the legs cut off and put this marble on. It’s in bad shape underneath, but it’s got these wonderful drawers that come out.”

The Gairys said that they are still adjusting to life in Yellow Springs, but they are happy to be here.

Janice Gairy added: “It’s a journey — it’s a new phase of life for us.”

“This place changed my life.”

That was the first thing out of Joanna Ward’s mouth when asked what living in Glen Cottages means to her.

A single mother of two, Ward had been renting a home in Springfield when she searched for housing in Yellow Springs.

“Home, Inc. was kind of a fluke,” Ward said. “I was browsing and I came across [a] house on Cemetery Street and I was directed to the Home, Inc. website.”

After filling out the application, Ward received a call from Chris Hall, Home, Inc’s. program manager.

“He asked me if [the Cemetery Street project] was something I would be interested in, but I wasn’t ready then, financially,” Ward said. “When I heard that they were building a new [project], I was ready, so they put me on that list.”

When Ward learned that she had been selected to purchase one of the homes, she felt relieved that she would be housing secure after renting for nine years.

“My landlady [in Springfield] was very kind to me and my kids,” Ward said. “But she was elderly and had health problems and I started to wonder, if something happened to her, where would I go?”

After several delays, Ward and her family were the first to move into the Glen Cottages. Ward said that her landlady sold the duplex in the months leading up to the move, “so we were ready to go.”

“Waking up the first day in our new place, I felt at peace,” Ward said. “Having a safe place where my kids can walk downtown is so important. I don’t think people are meant to have to struggle.”

Ward said that she looks forward to continuing to build relationships with her neighbors and working on her beadmaking, a hobby she shares with her daughters. Overall, she said that she is thrilled to be where she is.

“I think the world of Home, Inc. They did an amazing job,” Ward said. “I’m incredibly grateful for the opportunity to be a homeowner.”

One Response to “Six months of living in the Glen Cottages”