The Yellow Springs High School baseball team managed to sneak in only a few innings last week, in between multiple rainouts.

Rain postponed the week’s first game, scheduled Tuesday, May 3, at Gaunt Park, against conference opponent Legacy Christian Academy; and the next evening’s anticipated rematch against Trotwood-Madison was also called due to the weather. 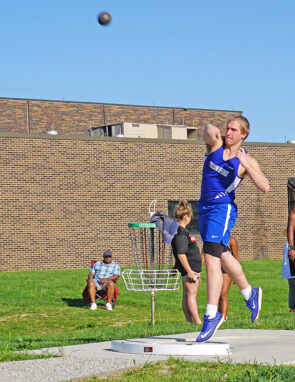 Yellow Springs High School junior Sven Meister hurls the shot put during the annual Bulldog Invitational track and field meet at Yellow Springs High School on Monday, May 9. The meet was the first Bulldog Invitational to take place on the school’s rennovated athletic field, and the first back at the school since May 2019. A report from the event will run in next week’s Bulldog Round-Up. (Photo by Jessica Thomas)

Thursday, May 5, seemed to offer some semblance of hope for resuming the season, as the Bulldogs traveled to Grady’s Field at the Athletes-In-Action complex in Xenia for a game against Legacy Christian. The Bulldog hitters were kept off balance all night by strong pitching, however.

There were only a couple of strikeouts, but there were several pop ups and a few stellar defensive plays by the Knights. Jake Ortiz-Thornton knocked in the only Bulldog run with a solid double, scoring Josh Clark as he ran around the slick and soggy all-turf field.

Ortiz-Thornton pitched well, but the Knights took advantage of some well-placed hits and a couple of fielding miscues by the Bulldogs. The umpires let the game continue through the constant rain, but just couldn’t let it go any longer past the fifth inning, when it became obvious that it was a safety situation for the players. The disappointing 10–1 loss for the Bulldogs was a bitter pill to swallow, and their mood matched the weather.

Friday brought yet another rainout, this time against nonconference opponent Tri-Village. Athletic Director Jeff Eyrich is working hard to reschedule this and the other rainouts as the Bulldogs approach the Sectional Tournament, which signals the end of the season.
—Mitch Clark, head coach

Amid two rained out matches last week, the Yellow Springs High School tennis team swept nonconference Greenon 5–0 in a home match Wednesday, May 4. Further details were not available at press time. The team was scheduled to play in the Sectional meet Tuesday, May 10, followed by a makeup match against Miami Valley School on Thursday, May 12. Coach Stacey Knemeyer asks for community support in the 4:30 p.m. contest on the Antioch College courts.