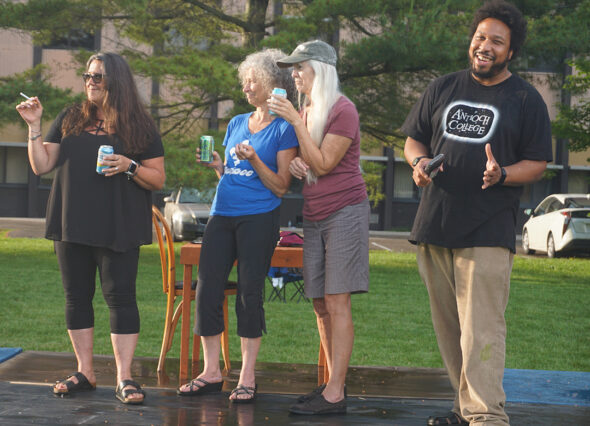 Local thespians Niki Sage, Marie Hertzler, Ali Thomas and Steve McQueen struck a pose during a rehearsal earlier this week for the annual Yellow Springs 10-Minute Play Festival. Their play, “Biology: An Education,” written by Anthony Fife of Yellow Springs, will appear along with others at the festival this weekend on the south lawn at YSHS. (Photo by Rosemary Burmester)

Local theater lovers, get out your lawn chairs. It’s that time again.

The YS Theater Company’s 10-Minute Play Festival returns this weekend, hosted outdoors for the second year in a row, on Friday and Saturday, June 3 and 4, beginning at 7 p.m., on the south lawn at YS High School.

This year marks something of a return to form for the festival — or, more accurately, a return to the motley. Though last year’s festival aimed to unite all of its submissions under a common thematic banner, this year’s seven short plays represent the anything-goes approach of play fests past.

“There are quite a few comedies this year, though they aren’t all straight-out comedies,” said Ellen Ballerene, who coordinated the festival. “And we also have some that are more abstract and more dramatic and serious in tone.”

Ballerene added that most of the short plays are written, directed and acted by villagers, and that, while many names and faces will be old hat to festival stalwarts, this year’s festival features some new talent.

One such first-timer is Steve McQueen, who is acting in “Biology: An Education.” McQueen has one of the largest roles in the play by villager Anthony Fife, in which — without spoiling its punchline — a mundane experience spirals into the absurd.

Though he has acted in the past in church plays and in the projects of fellow students when he studied at Antioch College — “Everyone wanted ‘starring Steve McQueen’ in their credits,” he said — this is the villager’s first lead role, and comes with a long monologue.

Despite the challenge, McQueen said he’s been enjoying communing with his fellow actors in rehearsals.

“After two years of being away from a lot of people, the immediate camaraderie of the cast, young and old, I really appreciate,” he said. “The script is really amusing — and the best parts of it don’t involve me!” 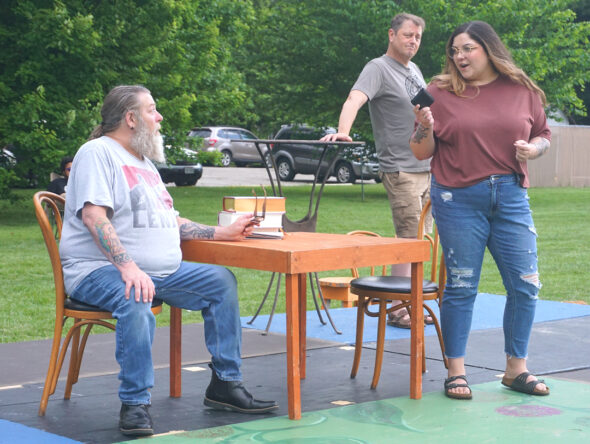 Ballerene, who directs the play in which McQueen stars, said challenge is par for the course with 10-minute plays — particularly “Biology,” which has the largest cast of any play this year, and years prior, with 12 actors. The ongoing pandemic has also been an added stressor; a member of Ballerene’s family came down with COVID, so the play had to move its rehearsals to Zoom for a while.

“But it’s been fun; I always like to bring in new people for the 10-Minute Plays — it’s a good way to get your feet wet,” Ballerene said.

Referring to McQueen, she added: “In his case, he’s getting his neck wet!”

Also testing the proverbial waters this year is villager and festival newcomer Rebecca Kuder, who directs and acts in “Dust,” which she also wrote. A fiction writer who studied theater in college, Kuder didn’t originally set out to write a play at all.

“Dust” began with a writing prompt Kuder was using to work through her current project, a memoir about a house in Yellow Springs where she and her family lived during her childhood and adolescence. The house, once located next to Gaunt Park, was burned down by the Village soon after Kuder’s family moved out in order to expand the park.

“The prompt was ‘a place that scared you,’ and it had to have some direct dialogue,” she said. “I was writing it for the memoir, and then I noticed, ‘Oh, it’s a play!’ So it truly was accidental.”

The play, she said, is something of a metanarrative, exploring the interplay between writer and writing — in particular, Kuder herself and the memoir she’s crafting.

“It’s about memory and narrative, and how we might rewrite the stories we’ve held all these years,” she said.

The act of rewriting is not only part of the play’s thematic foundation; it has also been part of the rehearsal process. Though Kuder wrote the script for “Dust” in January, she said her roles as writer, director and actor have allowed her to work collaboratively with her co-cast members to reshape the play as they rehearsed — a creative choice she said was intentional.

“[Collaboration] can make things more complicated than having a director with a set vision of how it’s going to be,” she said. “At this point in my life, I’m not interested in working that way [by myself].”

Because one member of the cast lives out of state, rehearsals have taken place both via Zoom and in person, which Kuder said has worked “surprisingly well” for the play.

“[The cast members] have been so flexible and wonderful in the process, and they bring so much to it,” she said. 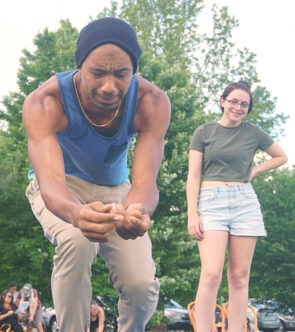 Shekinah Williams, who directs “The Moors,” said working with actors to suss out a script’s deeper themes has also been part of her process. Rehearsing with the cast for the first time, she said, revealed new dimensions to the script.

“It was just really interesting to see what everyone else thought was going on,” Williams said. “Hearing all their points of view was really useful.”

Though Williams has acted in 10-Minute Play Festival productions in the past, this is her first time directing one of the plays. She said the script, which was written by Texas playwright and screenwriter Cris Eli Blak, has a small cast and is straightforward enough that it felt like a natural choice for her directing debut.

“The writing is really good — I remember getting emotional just reading it,” she said. “There’s a lot of conversation to be had [about the play], but there’s not much question about what it means.”

The story follows a theater student auditioning for a lead role in a play who has, as Williams said, an “intense” conversation with the director of the school’s theater program about the role and the expectations that go along with it.

“It’s a lot about racial issues and privilege,” she said. “The playwright addresses all of the points of view in the conversation so well — that’s what I’m really excited about.”

Williams was initially reticent to try her hand at directing — she was nervous, she said, and as a tattoo artist, she’s also busy. However, she said, her boyfriend encouraged her to take her love of theater to the next level. Now, as the rehearsal process winds down in anticipation of opening night, Williams said she is considering returning as a director in the future.

“It feels really good — I’ve missed doing theater,” she said. “Any way that I can be involved in theater — especially in Yellow Springs — it’s just always so good.”

The 2022 Yellow Springs Annual 10-Minute Play Festival will be held Friday and Saturday, June 3 and 4, at 7 p.m. on the south lawn at YS High School. Admission will be by donation. Those attending are asked to bring their own lawn chairs or blankets for seating. For more information, visit facebook.com/ystcohio.

*The reporter is a member of the YS Theater Company; she and her husband, Anthony Fife, whose play was cited in this story, are both playwrights and actors in this year’s festival.

“The Moors,” by Cris Eli Blak, of Houston, Texas; directed by Shekinah Williams.

“All Kinds Of Love, or Maggie,” by Lee Huntington, of Yellow Springs; directed by Lorrie Sparrow-Knapp.

“Biology: An Education,” by Anthony Fife, of Yellow Springs; directed by Ellen Ballerene.