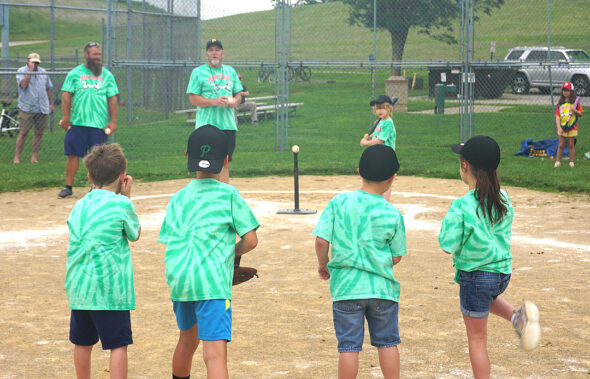 Groups of children waited in anticipation for the first hit and subsequent volley of balls launched by volunteers. (Photo by Jessica Thomas)

Perry League T-ball | All smiles on the diamond

It was a perfect and beautiful evening for opening day at T-ball. Those present, including approximately 60 players and an equal or greater number of spectators, enjoyed an hour and a half of chaos and fun.

Coach Rob Gay came earlier in the day to mark the field, creating chalk lines to highlight areas for on-deck and batting zones, which allow one child and one bat at a time; and lines for first and third base, which serve as guides to finding the bases, because there is no foul territory in T-ball.

Our night started with a run to the outfield for warm-up exercises. One child requested we do a quadrillion arm swings. We may have skipped a few numbers to get there. Gwen Jordan, 6, didn’t want to crawl on the ground and make animal noises because of poison ivy. Fair enough. Children get to choose how to engage during our games.

The starting line-up was strong. Violet Ficke, 7, was first at bat and showed that her T-ball skills from previous years were even more developed, as she clearly connected with the ball and sprinted to first base. Fiona Garcia, 7, was up next and she too had a clean hit, sending her friend to second as she made it to first. Our third hitter, Dahlia Espinosa, 8, maintained the momentum with another hit, loading the bases. Throughout the night children selected a bat, waited in the on-deck area, then took turns swinging away until they had a hit. Ren Reynolds, 5, took his time to carefully find a bat. That attention to detail paid off with a hit.

The evening saw a steady stream of line drives. Joaquin Schissler, 3, Imogene Cowperthwaite, 5, and Jay Jay Burns, 6, reminded us all that despite their seemingly small size, these kids can really hit that ball. Gretchen Richards, 9, and her sister Gillian, 7, showed off their skills with solid hits. Josie Boyer, 4, was among those who had multiple successful chances to bat, and was even congratulated by a mid-game fistbump from her baby brother. Aiden Scott, 5, explained to the coach at first, “I got it out of the field and into the grass. That’s a homerun.” After his second time at bat? “Another homerun.” Then he demonstrated, with his entire body, how fast the ball went.

There are several other things you overhear when volunteering on the field. Jett Drew, 5 going on 6, enthusiastically waited on first base and verified, several times, “I run to that one next, right?” while looking toward second base. Chuck Tritschler, 5, waited a few moments at first base then said, “I’m just gonna run off” and disappeared into the crowd of kids chasing balls. Juniper King, 4 — ”My nickname is Juney” — arrived at first base and noted, “It looks like a trampoline.” She bounced on the base until it was her turn to run to second.

Teddy Moore, 4, ran to first base after his hit, then immediately ran back to home plate. Several kids ran straight to second base, or to the outfield, or took long and meandering routes before eventually finding first base, as Grayson Nye, 3, did. Sarah Fink, 5, demonstrated super speed running bases, and maybe that speed can be partially attributed to her amazing ponytail.

We were fortunate to have an enthusiastic crew of older kids and volunteers. Rocket, Luke, Violet and Artie, among others, ably assisted on the first-base sideline, feeding a steady stream of balls into the infield for kids to chase and recover. Ember Deal, 3, collected too many balls to count.

You would have thought each ball she picked up was a precious jewel. She got plenty of practice rolling them back to the older kids.

Alaina Murray, 6, had a stylish green ribbon in her hair, matching the new T-ball shirts. And then we noticed the ribbon was actually made out of the hem of her new shirt. There was a splendid variety of footwear on the field, from Crocs to several cleat-clad feet to Ugg boots, which were surprisingly fast, according to the wearer, Dahlia Espinosa. Or children were plain barefoot, like 3-year-olds Rowan Kemper and River Brevik.

Creativity is always in abundance at our games, especially in the actual games being played.

Felix spent quality time collecting handfuls of chalk from the first base line. Amber Ficke and Thea Brevik, both 6, set up shop along the third-base line and played in the sand and chalk, neither interested in a turn at bat or fielding the balls. They were among many children excited for that fresh chalk. Others swept lines with their feet and slowly encroached on the border between the hitter and the fielders.

Another thing in abundance at our games? Smiles. Valkyrie Freeman, 6, had a wonderful smile enhanced by a missing top tooth. When asked if she’s in kindergarten: “I’m not in kindergarten. I was. I’m going to first grade.”

The first game of Perry League’s 2022 season is in the books. We’ll meet at Gaunt Park every Friday through July from 6:30–8 p.m. Our all-volunteer program is noncompetitive, free, and open to children aged 2–9, regardless of their race, color, creed, sexual orientation, gender identity, ethnicity, spiritual inclination or practice, ability or disability. We look forward to seeing you there.