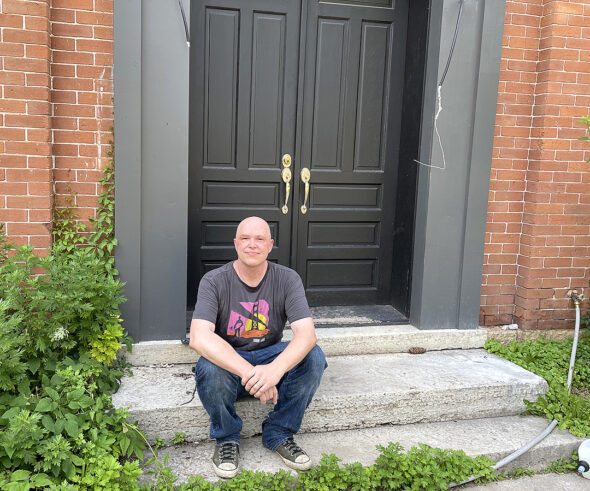 Architect Max Crome is pictured in front of his new architecture studio, formerly a private residence and before that the First Baptist Church. He remains hopeful that renovation efforts will conclude by the end of the summer. (Photo by Cheryl Durgans)

Although raised in Yellow Springs, architect Max Crome has built a reputable architecture firm thousands of miles away, in the San Francisco Bay area of Northern California.

Since opening Crome Architecture in 2001, his firm has designed and built hundreds of buildings on the West Coast, including 200 locations of Peet’s Coffee, a popular coffee company.

Now Crome has returned to Yellow Springs as the architect for some of his favorite projects, mainly reimagining the design and renovation of older buildings purchased by comedian Dave Chappelle through his company, Iron Table Holdings.

The renovation of the Union Schoolhouse, the first integrated school in Yellow Springs and future home of local NPR station WYSO, is among his projects.

Crome is nearing completion on design and renovation work for his second location, an architecture studio located at the former site of the predominantly African American First Baptist Church, which is now located on Dayton Street. The former church was most recently a private residence.

The middle child of three siblings, Crome grew up in a house near U.S. 68 on the south side of town after his parents moved the family to Yellow Springs in 1972. His dad worked as a professor at Antioch and was later employed at Yellow Springs Instrument Company, or YSI. His mother worked as a chemist with Vernay Laboratories.

A self-described “jock,” Crome was a track star during high school and still holds a discus record in track at the school. He has been married to his wife, Abby, a schoolteacher also raised in Yellow Springs, for 27 years and is the father of two children: a son, 22 and a daughter, 20.

Crome has an environmental design degree from the University of Pennsylvania, where he attended school on a track scholarship. After graduating from college, he moved to California’s Bay Area after deciding he liked the location because it had a similar vibe to Yellow Springs.

“I think people from Yellow Springs have a real connection with the Bay Area, because there is a similar esprit de corps, whatever you want to call it,” he said.

Crome said that, although local realtor Sheila Dunphy had been helping him look for a space for about a year, he did not immediately embrace the church location as his Yellow Springs studio.

“I didn’t think it really suited what I was looking for, space wise,” he said. “I was a little skeptical about it until I got up into the attic space and saw these trusses. I just fell in love with these trusses and was like, ‘Oh, I can make this work.’”

Trusses, Crome explained, are basically the framework of a building, including its rafters. He added that the former church’s trusses were “made and shaped by hand,” without screws or nails, and that marks from the hatchet used to shape them are still visible.

“You can’t even find wood like this, let make alone make trusses like this anymore,” Crome said.

Because of the uniqueness of the trusses, Crome said he made the design choice to leave the trusses exposed. This decision meant replacing the building’s roof to avoid adding insulation that would cover the trusses.

“[The trusses are made of] actual slabs of trees that are very thick — you can see the weird pattern on them and they’re not even straight, they just shaped them together however it would fit. I didn’t want to cover it up,” he said.

Another favorite design element of Crome’s is the mural he commissioned from local artist Pierre Nagley that honors Virginia Hamilton, who Crome called “the closest thing to a second mother” he had growing up.” The mural also includes a likeness of Dave Chappelle’s father, Bill.

Crome described the building’s new interior design as an architecture studio with open, collaborative space and lots of natural light.

“You’ll never have to turn the lights on because you’re getting light on four sides on a sunny day,” he said. “It is meant to be a creative space, to inspire people creatively.”

Crome’s architecture studio will be open to the public, and he plans to have dedicated gallery space for local artists to utilize for monthly exhibitions, much as he does in California.

The building is in the final stages of renovations, and Crome hopes to open the space by the end of summer, but is reluctant to estimate a firm timeline due to supply chain issues and other construction delays.

“I do want it known that stuff is happening, and it’s been such a struggle,” he said.

Likening his current work to a “song that’s not finished yet,” Crome said he’s not quite ready to release pictures of the interior of the church to the public.

“When I unveil it to the public, I want people to see it for the first time,” he said. 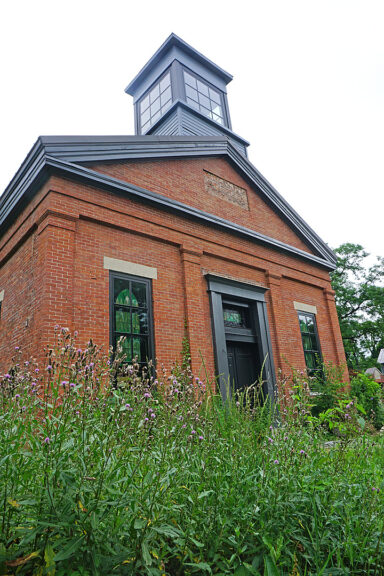 Built in 1865, and located at the intersection of Xenia Avenue and Whiteman Street, the First Baptist Church is being renovated into a studio space for Crome Architecture. (Photo by Reilly Dixon)

Crome said he was unaware of the church’s rich history when he purchased the building, but that he learned much of it when searching for its construction date, which he wanted to add to an empty plaque located in the front of the building.

“I always knew it was a church — I didn’t know it went back to [the 19th century] and [was] directly connected to the Conway Colony,” he said.

First Baptist Church — originally known as the Anti-Slavery Baptist Church — was founded in 1863 by members of the Conway Colony, a group of about 30 formerly enslaved people who settled in Yellow Springs in 1862, traveling here from Washington D.C. The group was escorted by abolitionist minister Moncure Conway, the son of the Virginia plantation owner who had held the group in bondage. Originally, the church’s members met in their homes.

“All in trying to discover the date it was built, I learned all this other history,” Crome said, crediting Antioch College professor Kevin McGruder, who has written a history of the Conway Colony.
Building for the community

Crome said that, with the recognition that the building was formerly a place of worship, he also met with First Baptist Church pastor Bill Randolph.

“I wanted to get a sense of whether the idea of this being remodeled into an architecture studio was a welcome idea or not a welcome idea, because this is my hometown, my friends have an association with this place, and I want to be as respectful as I possibly can,” he said. “I started getting good feedback that people felt good about what I was doing.”

Crome added that he made the decision to create a lawn for gatherings on the property — a decision that was made after he saw pictures provided by a friend who had attended the church in the past.

“I was trying to figure out what I was going to do with the yard, because [the former owner] had planted all these privacy plants — totally appropriate for a house — but when I saw it like this, I decided to create a lawn again for the community,” he said.

Crome said he is one of the very few architects remaining who is licensed but doesn’t have a professional degree in architecture.

“You can’t do that anymore. I snuck in under the deadline to do that. I did it through experience and passing the test. It’s problematic for me now because to get licensed in other states, I have to demonstrate the equivalence of a master’s degree,” he said.

Crome said he is currently working toward obtaining his Ohio licensure, a process he estimated will take about a year. For now, he has hired an architect who is licensed in Ohio to remain compliant with state regulations.

In the meantime, while Crome continues to work on both coasts, he said he is centering his attention on Yellow Springs. All of his California-based projects, he said, have been delegated to other members of his staff.

Crome also said there are major differences between the workflow of a small midwestern town and California.

“Most of my work here is with Dave [Chappelle]. I’ve got this really spectacular client. For someone like me, he’s a dream client, for several reasons. It’s not like some corporate board that I have to get approval from, either Dave likes it, or he doesn’t like it,” he said.

Crome also said he hopes to contribute ideas for ways to bring more affordable housing into the community.

“I have a lot of ideas around affordable housing that’s more contemporary and specific projects, like reusing older buildings around town,” he said.

Crome reiterated that working in his hometown holds a lot of meaning for him, and said his line of work is personally rewarding for him.

“The idea of being able to practice my trade in my hometown — I mean who would have ever thought I’d be able to do that,” he said. “I’m thankful for the opportunity to be doing this work, I really am. [My wife] and I talked for years about retiring in Yellow Springs. It fulfills a dream to be able to come back to Yellow Springs, and now I am building that future life for us by establishing my business here, so it is really important for me to be able to make a connection with this town,” he said.