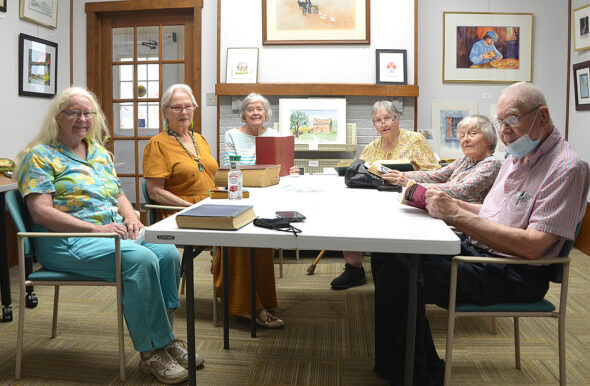 After more than two years away, the Shakespeare Reading Group reconvened on Sunday, June 12. The group met every week to read Shakespeare’s plays together until halting due to the pandemic, and its inaugural meeting after the hiatus was one of fellowship and shared appreciation of The Bard’s work. from left: Deborah McGee, Flo Lorenz, Claire Perks, Maggie Heston, Nancy Lewkowicz and Carl Hyde. (Photo by Lauren "Chuck" Shows)

For the love of The Bard, the Shakespeare Reading Group returns

“Speak the speech, I pray you, as I pronounced it to you — trippingly on the tongue!”

So recited Maggie Heston, a member of the Shakespeare Reading Group, which met at the YS Senior Center on June 12. The group, which meets every Sunday to read Shakespeare aloud — and trippingly — together, was holding its first such get-together in more than two years.

Heston, seated around a table in the Senior Center’s fireplace room with five others, credited the memorization of the line — famously spoken by the titular Hamlet — to a high school English teacher.

“She was from England, and she taught us all about Shakespeare and how the plays were performed — and we called her ‘Little Shakespeare!’” Heston said.

The group’s purpose du jour was to read “Romeo and Juliet,” but after such a long hiatus, the members present wanted to get reacquainted — not just with The Bard’s text, but with one another.

Carl Hyde recalled his first exposure to Shakespeare’s works in 11th grade, when his class read “Macbeth.” His memory lingered, he said, on a line spoken by Lady Macbeth, and not only on how arresting the passage was, but on how it affected a classmate tasked with reading it aloud.

“We got to the point where a girl was confronted with reading, ‘I know how tender ‘tis to love the babe that milks me. I would … have plucked my nipple from his boneless gums and dashed the brains out, had I so sworn as you have done to this’ — she couldn’t read that,” Hyde said.

English classes were a common touch-point for the group when discussing how each member came to appreciate Shakespeare’s writing, with a few members, like Heston, Claire Perks and Deborah McGee, having dug into the works while studying English in college. Nancy Lewkowicz, however, said she found inroads into her interest in another way.

“I hadn’t had a lot of exposure to Shakespeare, but my field of study has been linguistics, so I’m particularly interested in the language and how it has changed, so I do enjoy hearing it and reading it,” she said.

Flo Lorenz, on the other hand, said her avenue into Shakespeare was through a general interest in the stage — she and her husband, the late Leon Holster, are well-known for having been part of the village’s long-running community theater troupe, Center Stage.

“We loved musical theater and just plain theater,” she said. “It was so much fun.”

“So you can see, when we meet, we have lots of different backgrounds that come into the richness of our discussion,” Deborah McGee added, indicating her fellow group members at the table.

That rich discussion halted suddenly in March of 2020 when doors across Ohio closed in response to the arrival of COVID-19 in the state. The meetings had long been held at Friends Care Community, but even after many meeting spaces began reopening, Friends Care, whose population is at high risk when it comes to COVID, remained off-limits.

Many of the group’s members, whose ages range from 70s to 90s, were themselves — or lived with family members who were — at high risk for contracting early strains of COVID. In an interview after the meeting, McGee said this factor also accounted for the group’s extended interlude.

“There were some who wanted to [meet via] Zoom, but many of us couldn’t,” she said.
McGee has been the Shakespeare Reading Group’s de facto public relations manager since she joined about seven years ago, when she dutifully began contacting the News each week to spread the word about the weekly meetings. Many of the group’s current members have been involved for about the same length of time, joining after the meetings became more widely publicized.

With that in mind, at the meeting, no one could say exactly how long the group has been around; none of the current members have been there since the beginning. They could, however, point to the person responsible for the founding of the group: Seymour Wexler, who died last spring.

“He knew every play — knew so much of the history, he had every single play on video and he’s been to the Globe,” McGee said, referring to the famed theater in London historically associated with Shakespeare. “He was always our referral whenever we had a question. He was kind of like our leader.”

Seymour Wexler’s son, villager and writer Robert Freeman Wexler, said in an interview that his father had a long relationship with Shakespeare that was set apart from his educational and professional backgrounds: He had studied chemistry in college until being called to service during World War II, and later took over the family business, Wexler’s Jewelry, in Houston, Texas.

“He never studied theater or did any theater,” Wexler said. “But he was sort of an ultra-fan of Shakespeare for a long time.”

Before moving to the village with his wife, Shirley, Seymour Wexler had been part of another group in Houston — one that met regularly to read and talk about Shakespeare. When the couple moved to the village to be closer to their son and his family in 2007, they settled into the independent living cottages at Friends Care Community.

“They moved in next to [Janeal and Chris Ravndal], who were probably the first to welcome them,” Wexler said.

And Seymour Wexler brought his love of Shakespeare to the village with him, the Ravndals said in an interview.

“When he moved here, he wanted to start [a Shakespeare group] because the one in Texas had been so successful,” Chris Ravndal said.

“I don’t know how many months it took him to engineer that,” Janeal Ravndal added. “I don’t think it was long!”

The Ravndals said they attended meetings in the group’s early days, and that Chris Ravndal — encouraged by Seymour Wexler — had presented a class on “King Lear” to the group. They haven’t attended meetings in some time, however, and pointed out a matter of the meetings’ format that has changed in the intervening years.

“When I was part of it, each person had a character,” Chris Ravndal said.

These days — and at least since the meetings have been publicized in the News — the Shakespeare Reading Group has only one guiding principle: The group reads plays round-robin-style, with each attendee taking turns reading the next line.

Though he couldn’t pinpoint when this shift took place, group member Tom Siebold said in an interview that the reason for the change was essentially practical.

“Someone like Romeo requires a lot of reading, but many parts [in the plays] have very little to say,” Siebold said. “So it’s a way of involving people more.”

He added that the format keeps group members engaged with the play’s text, both listening to their fellow readers and reading along themselves.

“One has to track every moment — rather than snoozing while Romeo has got a big, long speech, you’re ready to get right on behind him!” he said.

Siebold, who was traveling when the Shakespeare Reading Group began meeting again, said he hasn’t yet been able to attend a meeting, but that he looks forward to returning to the camaraderie of gathering to read together with friends. The meetings are open to anyone willing to spend an hour-and-a-half reading with others, and Siebold recommended that folks who are interested drop by.

“It’s walking in the steps of a great mind,” he said. “It’s a great way to relearn Shakespeare or learn it for the first time — and it’s fun.”

McGee also encouraged new folks to give the group a try, citing Shakespeare’s longevity in Western culture as a point of attraction.

“His characters are universal. We can relate to Hamlet, Romeo, Juliet, and — well, I don’t know about Iago,” she said. “I don’t think anyone has ever used the [English] language as fully as Shakespeare.”

And she reiterated the gratitude the group holds for Seymour Wexler, whose love of that language remains in his absence.

“His spirit is around,” she said.

The Shakespeare Reading Group meets each Sunday at 1:30 p.m. at the Senior Center. New members and drop-ins are always welcome.