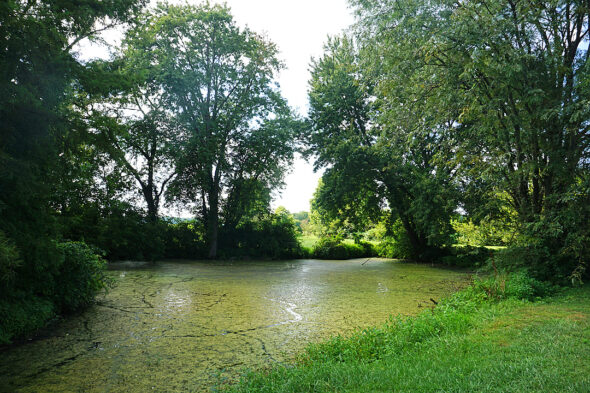 According to data collected by Yvonne Vadeboncoeur, Ph.D., and her small team of student researchers, the sediment in the northern bay of Ellis Pond contains the highest levels of phosphorus. As Vadeboncoeur told the Village Enviornmental Commission, high concentrations of phosphorus in sediment — combined with shallow and mostly stagnant waters — lead to the kind of algal blooms currently happening at Ellis Pond. The longterm solution, Vadeboncoeur suggested, is to dredge the pond. Village Manager Josué Salmerón previously said dredging would cost approximately $200,000. (Photo by Reilly Dixon)

Since Village Council’s July 5 decision to prohibit Village staff from using chemicals to mitigate the algal bloom in Ellis Pond, Council members Marianne MacQueen and Carmen Brown have been working with Village staff, members of the Environmental Commission, several environmental scholars and local experts to find a more holistic, and possibly permanent, solution.

Among those tapped to help in the pond restoration efforts is Yvonne Vadeboncoeur, a Wright State University professor of biological science who has a doctorate in aquatic ecology. Earlier this summer, Vadeboncoeur visited the pond with a team of students to measure nitrogen and phosphorus levels throughout the pond.

As Vandeboncoeur told the Environmental Commission at the group’s July 21 meeting, these two elements are the primary causes of rapidly occurring algal growth. However, it’s the pond’s shallow depth and lack of water flow that have led to higher-than-normal retention of phosphorus.

Noting this, Vadeboncoeur said it’s the pond’s sediment — not the water — that has the highest concentration of phosphorus.

“That is a normal thing that shallow lakes do,” Vadeboncoeur said at the meeting. “The reason lakes have significant algal growth is that phosphorus and nitrogen get into the soil, which fuels algal growth. This shades everything else and reduces the oxygen in the water.”

Vadeboncoeur and her team measured phosphorus levels in the sediment at seven points in and around Ellis Pond; samples were taken from the adjacent Yellow Springs Creek, the pond’s northern culvert, the north bay, at points in the southern and northern parts of the pond, by the dam and at the spring on the western side of the pond.

Vadeboncoeur’s samples revealed the northern bay — which is almost entirely covered in algae — is in “the worst shape,” with over 100 micrograms of dissolved phosphorus per liter of water measured.

After giving an overview of the problem, Vadeboncoeur proposed several options for reducing the amount of phosphorus in the pond. Her recommendations included removing plants rather than killing them, dredging the pond and creating a wetland in the north bay. 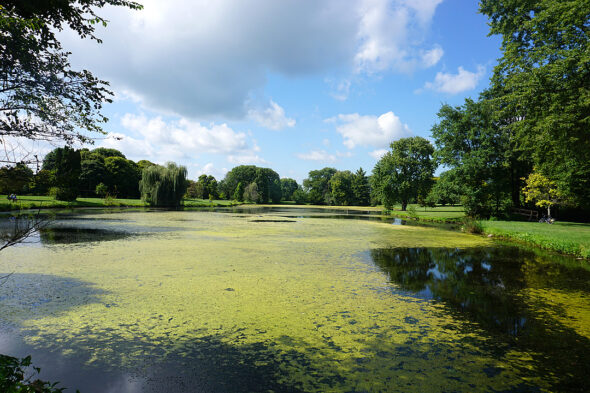 Ellis Pond as viewed from the southern reaches of the arboretum. (Photo by Reilly Dixon)

Also in the memo were several long-term solutions, including a partnership with Central State University professor and environmental engineer Ramantharan Kandiah, who offered pro bono services to the Village in order to monitor the sources and levels of pollution in the pond. Other recommendations included adding more native plants to the borders of the pond, and developing an Ellis Park management plan.

At the Aug. 15 Council meeting, Council members briefly discussed the pond, with Council member Marianne MacQueen summarizing the work that had been done and the recommendations from the Environmental Commission.

“In the long term, there is agreement that the pond needs to be dredged,” MacQueen said.
Commenting on a recent letter to the editor from Peter Townsend, a retired Antioch College professor of environmental science and geology, who suggested an alternative approach, MacQueen said that many villagers are invested in Ellis Park and the health of the pond.

“A lot of people really enjoy that place and I think it behooves us to do what we can,” MacQueen said. “We have a lot of volunteers who are interested in helping with that. Given the financial situations that are happening, it behooves us to consider using volunteers and people who want to help.”

MacQueen asked for Council’s permission to organize a volunteer effort. Council member Brown elaborated on the volunteer model, saying that there are several groups who want to help.

“We have a plethora of resources in this area — students, people who are willing to volunteer. They just need a way to do that,” Brown said. “It’s important that we have a streamlined way to help.”

Brown said an important part of the volunteer model would be coverage through the workers compensation program. The program covers volunteers who are not employed by municipalities.

“This is going to be a conversation that we are going to have to open up,” Brown said. “I think that this type of coverage would be an asset for the Village.”

Council President Brian Housh suggested using a model from the Ohio Department of Natural Resources, where volunteers could sign a waiver in order to participate in cleanup efforts.

Housh said that one of his big takeaways from the Environmental Commission’s report was Vandeboncoeur’s statement that the pond is not in immediate danger of becoming completely anoxic — a state that would likely lead to the death of much of the pond’s aquatic life.

“That has guided my feelings and my decisions, and I would like to take a little more time to put things in place,” Housh said.

MacQueen and Brown reiterated that they would like Council’s approval before creating a volunteer plan and consulting with the Village solicitor.

“I don’t want the Environmental Commission to spend time working on such a plan unless we talk with staff and Council says ‘go ahead.’ I would also like to come back to Council with the plan before enacting it,” MacQueen said.

Brown said the Environmental Commission could bring a plan to Council’s next meeting, and that fall would be a good time to remove plant matter that will die as the seasons move toward winter.

Council member Gavin DeVore Leonard asked Village Manager Josué Salmerón if the Village would be able to recoup part of the $14,000 spent on chemicals that would have killed the algae in the pond.

According to Salmerón, the money was spent before Council voted against using chemicals in the pond. He said that the $14,000 quote included the cost of chemicals, labor and probiotics that would balance the pH of the pond after it had been treated and cleaned.

“The figure we released a couple of weeks ago included all of those services. We weren’t just going to nuke the pond and leave it like that,” Salmerón said. “I think we are on the same page — our dream is to dredge the pond and reconstitute some of the local ecosystem of the pond.”

Though dredging is the goal, Salmerón said he did not believe it would be the most cost effective, especially given other needs in the village, including sidewalk repairs and playground equipment that complies with the Americans with Disabilities Act.

“I hear what you guys are talking about with wanting to create an action plan, but I think we are in different places as far as what we see the solution being. I don’t know how we come together on that.”

Brown said she believed the task of cleaning the pond is not impossible.

“I think it is the Village’s responsibility to create a path of least resistance for people who want to benefit this community and benefit this village,” Brown said. “We have too many resources in this village to not take advantage of them. We need to figure out how to do it.”

In other Village Council business, Aug. 15:

• Council members passed a resolution allowing Village Manager Josué Salmerón to enter into a contract with attorney John Waddy to review the Village’s Citizen Review Board proposal. The cost of the review, as outlined in the contract, will not exceed $5,000; Waddy will determine whether the proposal conforms to the Ohio Revised Code, Village ordinances and the Village personnel policy manual. Waddy will also determine whether the Citizen Review Board should be added to the Yellow Springs Charter or if legislative action by Village Council will be needed.

Finally, Waddy will provide any relevant best practices for implementation.

• Council passed a resolution approving a solid waste contract extension with Rumpke through October of this year. The original bidding process was completed in 2015 and the new contract extends services for two months. According to Salmerón, the extension will allow for more thorough negotiation of prices for a long-term contract or for the village manager to receive bids from other solid waste services.

• Council passed a resolution to approve a contract with Fillmore construction for resurfacing roads within the village in 2023. Fillmore Construction’s bid was for $180,409.34, but the resolution authorizes the Village Manager to write change orders for up to 25% of the bid amount, or $45,102. According to Public Works Director Johnnie Burns, resurfacing will take place on Herman Street, Allen Street, and West South College Street.

• Council members passed a resolution allowing Salmerón to apply for an $80,000 grant through the State of Ohio for body worn cameras for the Yellow Springs Police Deparment. If awarded the full amount, YSPD would be able to purchase 11 cameras and pay for associated training. The grant itself is a reimbursement grant, meaning the Village would purchase the equipment and be reimbursed. While the grant lasts for five years, the state will “step down” or reduce the dollars disbursed each year. There will be some ongoing expense for the Village — the cost of training and redaction for videos being released into the public record.

• Council passed a resolution to purchase a property abutting Bill Duncan Park at 545 Dayton St. for $158,000. According to Salmerón, acquiring the property will allow the Village to protect current assets, such as Bill Duncan Park, and ease transition into two projects: resurfacing the multimodal path, and the sidewalk installation on Limestone street.

• Council passed an emergency ordinance to allow Public Works Director Johnnie Burns to contract with the municipal energy services agency for lineman services following several Village staffing changes. According to Burns, lineman contracted through the service would supplement current staff and come equipped with their own tools and vehicles.

Salmerón suggested an update to the Village’s noise ordinance language.

“It is in dire need of a rewrite. There are a couple of things in there that make it difficult to enforce.”

Salmerón said that the current ordinance identifies noise levels that constitute a violation. There are separate levels for residential and commercial areas. The village is required to measure decibels in a very specific manner, Salmerón said, noting that the methods have not been updated to reflect modern technology.

“Technology has advanced much further than our ordinance has,” Salmerón said.

A second issue with the ordinance is the certifications needed for the village to read the noise meters. Salmerón said that the training to read the meters is not “readily available.” He also said that updating the ordinance would allow the Village to address noise complaints; for example, there have been several complaints about amplified sound from buskers and noise coming from downtown establishments.

According to the Village’s Planning Commission agenda, the noise ordinance was to be discussed at the commission’s Aug. 23 meeting.

Village Council’s next meeting will be on Tuesday, Sept. 6, in lieu of the body’s typical Monday meeting time, in observance of Labor Day.