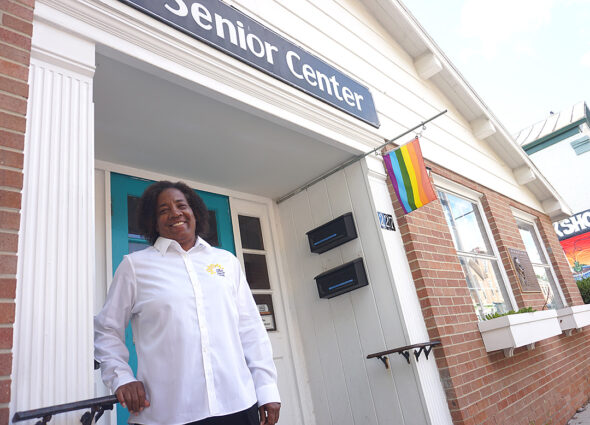 Villager Teresa Bondurant stands in front of the Senior Center, where she has worked for 13 years — often without fanfare — to aid area seniors through the center’s Homemaker Program. Bondurant will be inducted into the Greene County Women’s Hall of Fame later this month in recognition of her years of community service. (Photo by Lauren “Chuck” Shows)

Bondurant to be inducted into Women’s Hall of Fame

Since its inception in 1981, the Greene County Women’s Hall of Fame has frequently paid tribute to Yellow Springs women who have worked to make their communities better places to live. This year’s local inductee, Teresa Bondurant, is no exception.

Bondurant, who is 60, will be honored for her long service to area youth and elders at the Hall of Fame’s annual Recognition Day Luncheon on Saturday, Sept. 24. Also being inducted are ​​Marsha Bayless and Jean Dungy Shoates, of Xenia; Patricia Phillips, of Beavercreek; and Hope Taft, of Spring Valley.

A village native, Bondurant said she found out about her upcoming induction into the Hall of Fame “a few days after everyone else.” Colleagues surprised her with the news at the Senior Center, where she is the manager of the Homemaker Program.

“I was definitely floored — I had no earthly clue that anything like this was even in the works,” she said. “I’m honored and humbled — it was such a surprise.”

In speaking with the News this week, Bondurant said the throughline of her life has been marked with surprise; after graduating from Yellow Springs High School and Jackson State University in Jackson, Miss., she earned her Doctor of Medicine degree at Meharry Medical College in Nashville, Tenn., intending to practice medicine. But life, in its surprising way, had different intentions for her.

“I ​​was in the midst of my residency in internal medicine at Mount Carmel Hospital in Columbus when my parents became ill,” she said. “At the same time, I started having kids.”

Bondurant left Columbus and moved back to her childhood home on Omar Circle to help care for her parents. Over the next several years, with her husband, Lee Wagner, she decided to put her medical career aside to focus on raising her four children: Ameer, Ahmad, Amani and Aamil.

“It takes a village to raise a child,” she said. “I have certainly used my village to the fullest — including my Central Chapel family, the Omar Circle family, and certainly just the community in general.”

At the same time, Bondurant herself was also quietly becoming a pillar of the community herself, frequently volunteering to help students at Mills Lawn, sitting on school committees and raising awareness for levies. She also aided with school theatrical productions in which her children were involved.

Bondurant also volunteered with the sports programs in the schools, as her children were student-athletes. Bondurant herself had been a seasoned student-athlete; like many other locals, she got her start in Perry League, and eventually ran track and played volleyball and basketball in high school. She was also among the first group of female athletes in the schools to play soccer; in the fall of 1978, she and the team were champions of the highest state tournament available to girls soccer teams at the time. In 2018, Bondurant was among the inaugural group of honorees inducted into the Yellow Springs Athletic Hall of Fame.

While her children were in the schools, Bondurant said she also provided a kind of unofficial mentorship for students looking for adult guidance.

“As my kids were growing up, I said I was an unpaid [schools] staff member,” she said with a laugh. “I’ve never turned down a child — or an elder — who needs help.”

Bondurant’s work with local elders, to which she has devoted the last 13 years of her life, began around the time she sent her youngest son off to kindergarten. With no more children at home during the school day, she said she felt it was time to begin “stepping out.” Returning to her previous career in medicine, she said, was not feasible.

At the same time, the Senior Center had just initiated its Homemaker Program. That program, according to the center’s website, is designed to enable those enrolled to “achieve and maintain a clean, safe, and healthy environment.” Staff members of the program, which is funded through the Greene County Council on Aging, aid clients, many of whom are seniors, by performing basic home upkeep tasks such as cleaning, shopping and running errands. The program’s founder and a friend of Bondurant’s, Barbara Brookshire, reached out — and Bondurant’s life took another surprising turn.

“She asked me if I’d help by going to see a person — just one person. That’s how it started,” Bondurant said.

She agreed to help Brookshire with the program, but before seeing her first client, she said, she wasn’t sure the specific work required by the program was what she was looking for — after all, she said, most folks don’t go to medical school “to go and work in someone’s house.” However, after spending a day working for the program, Bondurant said she was “hooked, practically at the beginning.”

The benefits offered by the Homemaker Program, Bondurant said, are many — in addition to household tasks, those working in the program also offer companionship to area seniors, particularly those with mobility issues or who have no family nearby.

“We have a lot of orphaned adults in the village,” she said. “We may be the only face that a senior sees in a week, two weeks.”

However, Bondurant said, she counts herself among those who have benefited the most from the program. Yes, she said, she is providing service to area seniors, and aiding them in remaining “in their home, whatever that means to them.”

But she has been rewarded through her work time and again, she said, by being enabled to befriend and “soak up the wisdom” of some of the village’s prominent leaders — she specifically cited the late Isabel Newman, an early client whom she called an “icon.” It was Newman, she later found out, who, before her death in 2020, had pushed coworkers to nominate Bondurant for the Hall of Fame.

“[Newman] really helped me learn what seniors need and how to work with seniors,” she said. “People think I’m joking, but I feel like I should have paid [the clients] to come in there and spend time with them. That’s why I was just so humbled with the whole thing, because I’m like, ‘Are you kidding me? All that I’ve gained from this program — and I’m getting honored for that.’”

Bondurant’s quiet gratitude for being able to do the work she loves, often without fanfare, was informally cited by several villagers who reached out to the News with the initial reports that she had been named to the Hall of Fame. They urged the editorial team to reach out to Bondurant early and often for an interview, anticipating that she might be reluctant to praise her own efforts in print.

She corroborated these accounts — “In general, I like to be part of the background,” she said, a tendency that earned her the nickname of “Mother Teresa,” both in high school and in her college sorority, Delta Sigma Theta. But that guiding principle of her life’s work — to do good in the world without seeking recognition — was originally instilled in her, she said, by her parents, LeRoy and Vivian Bondurant.

“They taught me to be humble,” she said. “Just do what you need to do — you don’t have to get applause or receive money or accolades, but just try to do the right thing.”

Bondurant again reflected on the fact that her life took a different turn than she had expected when she left the village after high school.

“I did not understand it initially — I’ve still got classmates who are all out doing big things, and that’s what I had planned to do,” she said.

Nevertheless, she said, she is “fulfilled and happy” doing work that she loves. And she intends to keep doing it for a while — her work with the Homemaker Program, she said, will be her “swan song.”

“It really has been a godsend — and I just thank God for all the opportunities that he’s given me,” she said. “And that is number one: God, family and community. I really try to live by that as best I can.”

Bondurant will be inducted into the Greene County Women’s Hall of Fame on Saturday, Sept. 24; the annual luncheon will begin at 11:30 a.m. at Walnut Grove Country Club in Riverside. Tickets are $25; those interested in attending are asked to make checks payable to the Greene County Women’s Hall of Fame and mail them to PO Box 703, Fairborn, OH 45324 by Sept. 17. For more information on luncheon reservations, contact Hall of Fame Chair Ann Byrd at 937-429-1805.