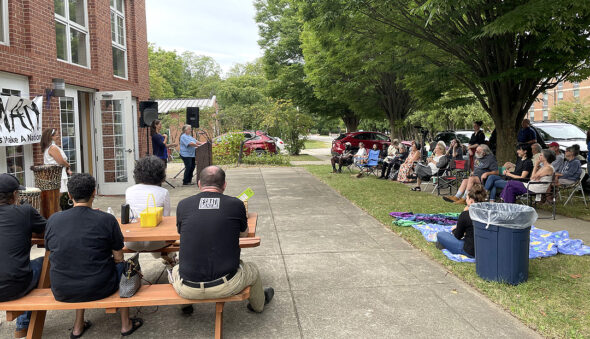 H.U.M.A.N. members, village residents, Antioch administrators and students gathered on Saturday, Sept. 10, to celebrate the opening of the new “HUMAN Racial Justice and Human Rights Library,” located in the Coretta Scott King Center for Cultural and Intellectual Freedom. Pictured at the podium is Judith Skillings. (Photo by Cheryl Durgans)

A plaque on the door of the new HUMAN Racial Justice and Human Rights Library, located in the Coretta Scott King Center for Cultural and Intellectual Freedom, proclaims: “This resource library is dedicated to [H.U.M.A.N.] and its vision of undoing racism in all of its facets. The library will serve as a resource for antiracist community organizers and those working to create a future where equity, justice, and liberation are centered, and where all of our humanity is affirmed, respected and ever-lasting.”

According to Center Director Shadia Alvarez, the HUMAN Racial Justice and Human Rights Library — with portraits of Chappelle, Dunn and Garrett created by local artist Pierre Nagley, prominently displayed on the walls — will be a resource for both Antioch students and the community.

“[The library] was developed in order to serve as a resource for community organizers and allies looking to deepen their work around racial justice and human rights; to network with organizations and groups to both share their work and the challenges,” Alvarez wrote in a recent email to the News.

H.U.M.A.N. — Help Us Make a Nation — was formed in 1978 following a human rights conference held at Antioch College, and holds community as a centering part of its organizing principles.

Alvarez mentioned past interviews published in the News in which Dunn, who passed away in the late 1980s, further explained the impetus for the name.

“You can’t be human without talking about racism, sexism, poverty and war,” Dunn said in a 1979 News article. “Everyone is born with the right to be human, but powerful forces in society inhibit people from acting out that human-ness.”

Dunn’s legacy also lives through the People’s Institute of Survival and Beyond, or PISAB, an organization he co-founded in 1980 with his wife, Diana Dunn, and prominent civil rights activists, including the late Rev. C.T. Vivian. A precursor to today’s antiracist discussions largely based in university settings, the New Orleans-based organization trains community organizers — over a million people to date — through its “Undoing Racism” workshops.

During the Sept. 10 program, H.U.M.A.N.’s founders were remembered. Felicia Chappelle — daughter of William Chappelle, who died in 1998 — referenced her memories as a “mini member” of H.U.M.A.N., spotlighting the intergenerational respect given to children.

“I thought that groups of adults always end serious conversations by asking the young people present, ‘What are your thoughts about this?’” she said.

According to Skillings, Garrett, challenged with serious health issues, was unable to work, and, despite being a divorced single mother with “three babies to raise,” found a way to survive.

“She did it through creativity, frugality, strength of freakin’ will and love for her children. She made a way out of no-way every day and got up the next day and did it all again,” she said.

Skillings said Garrett, a native of Springfield, fought to be in Yellow Springs, believing it was a better place to raise her children.

“Not that it was perfect. She couldn’t get rented to — I don’t know if it was because she was Black, or she was a welfare mother, or because she had babies — but she made a way,” she said.

“It brought together and began training many of the community activists who would be the early participants of H.U.M.A.N.,” she said.

According to Alvarez, recent interviews with current and former H.U.M.A.N. members revealed the scope of activism in the organization.

“Members traveled to Greensboro, N.C., to march after the so-called Greensboro Massacre, in which five civil rights demonstrators were killed by Ku Klux Klan and American Nazi Party members. They brought icons like [activists] Saul Alinsky, [Anne] Braden and [musician] Pete Seeger to the village. And they gathered regularly at “floating coffeehouses” in local homes to strategize and socialize,” she wrote in her emails.

H.U.M.A.N. member Mike Miller, who spoke at the dedication, recalled those times as being “electric.”

“Something about those coffee houses and open mics — people would feel the spirit in the house,” he said. Miller also said that the organization was a “strike force of activism.”

A new generation of members, including Village Council member Carmen Brown and activist Bomani Moyenda, have joined stalwart members like Skillings and Miller to continue the mission.

According to Brown, in 2019 she, Moyenda and Dianna Dunn met at Mike Miller’s house to discuss the future of the organization, which had disbanded in the 1980s. Subsequent conversations and reorganization efforts resulted in H.U.M.A.N.’s revival as a nonprofit in 2020.

Brown spent a lot of time listening to the history of the organization, collecting stories from members Pam Davis and Neal Crandall, reading member notes and “pouring over bylaws.”

Your Rights’ talk with immigration attorney Brian DiFranco in September of 2019, highlighting what to do if confronted with ICE agents in the workplace or otherwise. It was very informative.”

Plans are in the works for a speaker series featuring the stories of local “Freedom Riders, Ph.D. candidates, activists and visual artists. It is a part of the mission of the organization at every opportunity to reinforce the beauty of our humanity,” Brown wrote.

Alvarez wrote that the library fits comfortably with the organizational mission of the Coretta Scott King Center.

“[Coretta Scott King’s] stand, her beliefs, her work on behalf of historically marginalized communities contributed to us believing this was a natural connection and the best location. HUMAN is the embodiment of those beliefs and an opportunity to keep the work going.”

Alvarez said community members interested in learning more about future Scott King Center programming, and becoming involved with the center can email cskc@antiochcollege.edu. Future programming will be announced in the coming weeks.