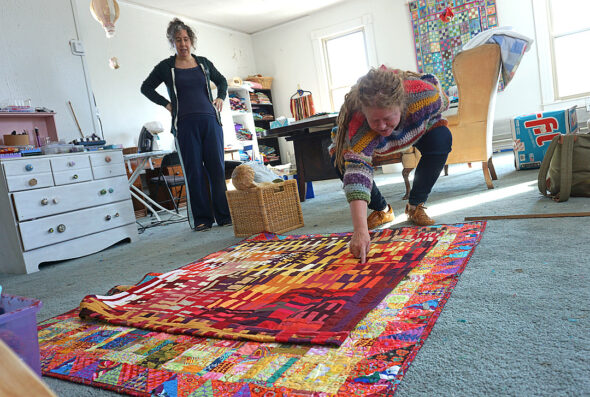 Sharri Phillips, left, and Karen Russell, two members of the Big Art Studio Collective, prepare for the collective’s exhibition, on display at The Winds Cafe now through the end of December. (Photo by Lauren “Chuck” Shows)

The next time you step into The Winds, expect to be transported into a world of whimsical impressionism and colorful, modern improv — among other visual expressions.

On display at the downtown restaurant now through December is the work of the Big Art Studio Collective: Chelle Palassis, Sharri Phillips, Karen Russell and Sarah Strong, who form the nucleus of the group; pieces from local artist Pierre Nagley and former villager and artist Corrine Bayraktaroglu, who are friends of the collective, are also part of the exhibition.

The News recently caught up with Phillips and Russell at the Big Art Studio, for which the collective is named, on Xenia Avenue. The artists bustled around the airy studio — full of light from its many large windows on even the cloudiest days — trading friendly banter while choosing pieces from their large volumes of work to ferry down the street to The Winds.

Phillips had taken the “jellyfish” — actually the top of a papier mache mushroom crafted by Russell — and placed it on top of a lamp with a look of gleeful mischief, so that it was obscured in plain sight.

“Sharri loves jellyfish, and I’ve told her she’s only to look at it — she can’t have it — but she’s hiding it!” Russell said, laughing.

The artists said the Big Art Studio itself is named not necessarily for its size, but for its location, up a flight of stairs from the Little Art Theatre.

“And out front, we’ve got the Tiny Art Gallery,” Russell added, indicating the small entrance to the studio, which displays a range of work from some of the collective.

Packed into the gallery, lighting any available space with color and form, are watercolors, prints and paper animals from Palassis; miniature felted trees and animals, painted Christmas baubles and quilt squares from Russell; and large quilt pieces and dollhouse-type miniature structures and scenes from Phillips — among a great many other creations by the artists. Strong, whose work was not on display in the gallery that day, constructs handmade paper pieces, often in neutral creams offset by natural, earthy hues.

These works are representative of what will be on display at The Winds, in addition to playfully macabre multimedia pieces from Nagley and painted animal skulls and embroidery from Bayraktaroglu, who sent her pieces to be included from her current home in Arizona.

“Between all of us, I think we have most of the media covered,” Phillips said.

This is the first such show that the collective members have mounted together; each has held separate exhibitions, but with the ongoing pandemic affecting artists as much as anyone else, they decided a “strength in numbers” approach would be their best bet. The exhibition has been in the works for nearly two years, as The Winds has only recently begun opening their walls for art hangings again after halting the practice due to the pandemic.

“We want people to come with cases full of cash and buy all our things, please!” Russell said with a laugh.

A collective built on friendship

Phillips and Russell, whose interests in quilting and other textile works overlap but often diverge in tone and structure, said they’ve both devoted themselves to their creative work for the majority of their lives. Phillips attended Antioch College, graduating in 1996 as an art major.

“I took a sculpture class at Antioch and that was it. I was like, ‘This is what I want to do. I want to be an artist,’” she said.

Phillips said she focused on woodworking for a while, building small houses and figures in the college’s woodshop; an “obsession” with miniatures, she said, has been lifelong, and still permeates her work. Her artistic journey took a turn when she got a sewing machine: She took an independent study course in quilting and worked with local textile artist Gerry Fogarty to refine her craft, which includes dreamlike quilts and miniatures.

From that point on, her body of work grew to include dolls and stuffed monster-esque figures she called “Roaries,” — “I got to know Sharri when she was in her monster period,” Russell chimed in — quilted hot air balloons, which were featured in a Springfield Art Museum show in recent years; and interminably cute felted mice, rabbits and dragons, often dressed in handmade clothing.

Russell said her artistic journey was shaped by the place she was born and raised: Bury, an English town near Manchester, whose local industry, she said, was reliant on cotton and textiles.

“Everybody in my family sewed or was involved in some way in the production of fabric, whether they worked in the mills as cutters or seamstresses or did the wages or whatever,” she said.

From an early age, Russell herself was working with a needle and thread, embroidering the handkerchiefs of her bare-knuckle boxer and army sergeant major grandfather with flowers and handcrafting clothes for her Pippa, a fashion doll akin to Barbie.

“My Pippa had the most fantastic wardrobe in the whole of Bury,” she said.

Because her family was of limited means, she said, she didn’t dare to dream that she could be an artist — but because she always had access to fabric in some form, she could dream of being a fashion designer. One source of fabric was through her father, who worked as an embalmer in a funeral home, and knew someone who had access to satin and taffeta for the insides of coffins and would supply her with the end rolls.

“So I was making these huge dresses out of shroud and coffin liner!” she said.

Russell studied women’s fashion for two years at a technical college, after which she made her living with small businesses selling her own creations. For about a decade, she said, she made and sold hats in a market in Leeds. After a while, though, she said this no longer satisfied her creative bent.

“I got very, very bored of fashion, because people just wanted the same plain, black thing that everyone else had,” she said. “I think that’s why I went more into quiltmaking and patchwork bags and things like that — but this year, I started moving outward from fashion into other things.”

“And now I’m making papier mâché mushrooms!” she added with a laugh.

Phillips, Russell and Palassis have shared the Big Art Studio for close to a decade, with Strong occasionally hosting classes there, and Nagley sometimes using the space, too. The two artists said their collective formed around their friendships — which they said coalesced quickly and easily. Phillips recalled meeting Russell for the first time; Phillips was working providing childcare for a friend’s baby, and was pushing the baby in a stroller.

“And Karen yells at me from across the street: ‘Hey, hi. I just had a baby. Do you want to babysit?’” she said, laughing. “We were friends the second we saw each other.”

“I loved Sharri straightaway,” Russell confirmed. “And it was that way with Pierre, too.”

Russell and Nagley were introduced by a mutual friend, and immediately hit it off — Nagley was fascinated with sewing and wanted to learn, and Russell agreed to teach him and help him craft his own handmade coat. Before too long, the two were working together on the coat in the back room of Russell’s house; sometimes Nagley would be there well into the night, and would arrive the next morning with his small dog, Beto, before Russell awoke.

“Already made himself a cup of tea, and Beto’s eating one of the sausages out of the fridge,” Russell said, laughing.

Phillips and Russell said the artists in the collective rarely collaborate, but that their individual work is bolstered by the support they show one another. When one artist is experiencing a lull, another will help talk them through it, reminding them that all such creative blocks will soon pass.

“We say, ‘It’ll come when it comes,’” Phillips said. “We appreciate each other’s work and we want to be supportive of each other.”

As if in demonstration of the unique kind of creative aid they lend one another, the two spent a few minutes trying to briefly describe each other’s oeuvres.

“Yours is very whimsical,” Russell said.

“Yes!” Phillips said. “‘Colorful, modern improv!’ That sounds right. I never have a sketch or anything for my work, but I do have a vision.”

“And I have no plan!” Russell said.

The Big Art Studio Collective will display their works at The Winds Cafe through December. Most items in the show will be available for sale; proceeds from the sale of an embroidered piece by Bayraktaroglu are set to benefit Glen Helen.