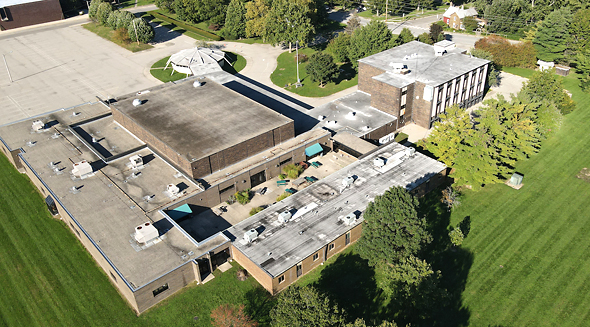 School facilities were at the center of much of the discussion at the most recent meeting of the Board of Education on Thursday, Nov. 10. Nearly nine months after the formation of the Facilities Committee, questions about the purpose and direction of the committee remain a source of tension between its members.

The board discussed the responsibilities of the Facilities Committee as laid down in the committee’s statement of purpose, which was approved by the school board in February.

According to the statement, the charge of the committee is “to fully understand whether a comprehensive permanent improvement plan could match our facilities with the school district’s educational needs in an economically and environmentally sustainable way.”

Board President TJ Turner said he had asked that the statement of purpose be added to the board meeting’s agenda following comments he had heard from community members concerned about the committee’s process. He compared the committee’s purpose to those of fact-finding committees formed in the lead-up to past failed facilities levies, which would have funded partial new construction at the middle and high schools in 2018 and a new K–12 facility in 2021.

“[The Facilities Committee] is looking at something that some portions of the community felt was missing [for the past levies], which was a deep look at what a deep renovation and repair of the current facilities would do,” he said.

Turner went on to emphasize that, though the committee is responsible for gathering data, it will ultimately be the school board’s duty to make final decisions about what kind of plan to bring forward for community support and a potential levy. He said the committee expects to deliver full cost estimates for renovations and repairs at both campuses in December. Those costs, Turner said, can then be compared with those of new facilities.

“I am in support of this process because it gives us another data point … but that does not mean that we’re abandoning [the option of] a new build,” he said. “We need as much as we can to get an apples-to-apples comparison, like we’ve been asked to do, to what a new build is going to cost.”

School board member Judith Hempfling, who is chair of the Facilities Committee, went on to comment on the “frustrations and passions” that have been expressed at recent committee meetings. Citing disagreements between committee members — including about how agenda items are prioritized and whether or not the committee should be comparing the data it has gathered with that of data gathered for the proposed 2021 K–12 building during meetings — Hempfling urged the committee to focus on its stated purpose.

“I’m calling on all of the committee members — all of us — to do our part to bring down the temperature,” she said.

Board Vice President Dorothée Bouquet suggested that two board members who are not on the committee volunteer to work up a cost estimate of what a new K–12 facility might cost as of 2022 — construction costs have risen over the last year due to inflation — in order to compare that cost with what the committee finds.

“It will help the Facilities Committee stay on-plan,” Bouquet said.

Turner and board member Luisa Bieri-Rios volunteered to work with the district’s contracted architect, Mike Ruetschle, to deliver the estimate.

Later in the meeting, Superintendent Terri Holden reminded the board that the Ohio Facilities Construction Commission, or OFCC, now offers districts a 27% reimbursement for the construction costs if they partner with the OFCC to build new facilities — a 1% increase from the offer made for the proposed 2021 K–12 school. Bouquet suggested that the district go ahead and apply for the OFCC funding, as applying is a months-long process and does not require a commitment to build new facilities.

Options for new and expiring levies

Treasurer Jay McGrath gave a presentation on the district’s five-year financial forecast and how it will affect options for new and expiring levies over the next several years.

According to McGrath’s report, district expenditures will begin to outpace revenues in the fiscal year 2024 as costs rise, with a steep drop-off in revenue following the 2026 expiration of two emergency levies of $1,060,000 and $915,000, and cash balances in the negative by 2027. McGrath’s report cited the loss of the emergency levies as the “biggest local factor” on the five-year forecast.

However, if the district votes to renew the emergency levies, the district’s finances will stay in the black through 2029. One strategy for renewing the levies, McGrath said, is to combine and renew them as a substitute levy, a type of levy that can replace expiring emergency levies for an indefinite period. The advantage of a substitute levy, he said, is that passing it does not raise taxes for its existing tax base.

Additionally, even though passing a substitute levy would not raise taxes, it could still collect more revenue at the same millage rate compared to other levy types; when new homes or businesses are built in a municipality, other types of levies effectively lower the tax burden across the board for taxpayers, keeping a levy’s total revenue amount the same even as the tax base expands. Conversely, a substitute levy’s effective tax rate remains the same, capturing more revenue as more homes and businesses are built in a municipality.

“It’s a way to grow revenues with growth in a community,” McGrath said.

The emergency levies will need to be renewed by November 2025 in order for their revenue to be maintained.

McGrath presented options for the board to discuss concerning timelines for a potential substitute levy, and for the possible renewal of a permanent improvement levy that expires in 2024, which nets the district about $150,000 per year. A $4.5 million bond issue passed in 2000 to pay for renovations and additions at both school campuses will be paid down at the end of 2026.

In addition to these levies, McGrath said, the board will need to bring a new levy to voters to pay for either the renovation and repair of existing school facilities or for new school facilities.

“No matter what it is, I think you’re looking at a combination bond issue and some other type of tax,” McGrath said.

The district is limited by the state in the amount of money it can bring before voters for a bond issue based on a municipality’s projected debt capacity; the bond issue limit for the Yellow Springs school district is $28.5 million.

However, in addition to a bond issue, a district can fund a large project via certificates of participation, or COPS, which can be funded with a permanent improvement levy, a general operations levy or a local income tax, allowing a district to borrow money above its debt capacity. There is no debt ceiling for COPS funding.

One option for renewing the expiring levies, McGrath said, is to renew the current permanent improvement levy at the same level in November 2023, approve a substitute levy continuing the emergency levies in March 2024 and wait until November 2024 to pass a combination bond issue and another revenue source — either an additional permanent improvement levy, operations levy or income tax — to fund facilities improvements.

The third option McGrath acknowledged is unconventional for most tax bases: Forego renewing the current permanent improvement levy before its expiration next year and put before voters a combination bond issue and another tax revenue source to fund school facilities improvements in November 2023 — the soonest available date — and approve a substitute levy in March 2024.

“As a school treasurer, the playbook says don’t ask for new money until you lock up the money that you have,” McGrath said. “But I’ve been here close to a year now, and I’ve realized Yellow Springs doesn’t like the playbook — so we’re going to throw it out.”

Though the board made no votes on which path they might take for levies, board members favored the third option as the most likely way forward.

“We owe it to the students and staff to address [facilities] issues as soon as possible,” Bieri-Rios said.

In order to place a combination bond issue and tax on the November 2023 ballot, the board will need to have finalized plans for facilities improvements to existing buildings or all-new facilities and approve a levy resolution by June of 2023 to prepare and file a potential levy with the Board of Elections by the deadline of July 25, 2023.

“The sooner the better, and I think that [June of next year] will give us enough time,” Hempfling said.