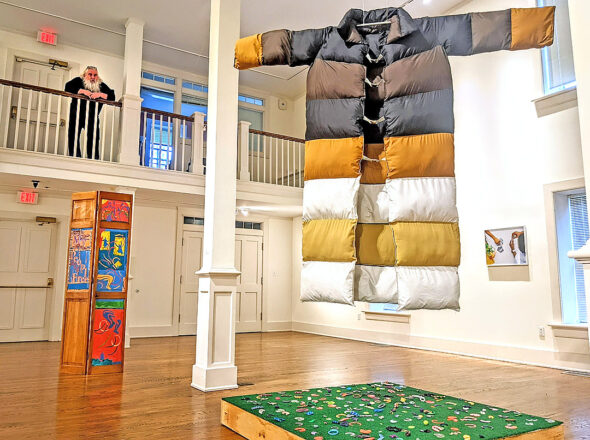 Michael Casselli looked down from the second floor of Herndon Gallery in Antioch College’s South Hall at the exhibition currently on display, “Flourishing,” part of the biennial “FotoFocus” exhibition series out of Cincinnati. Casselli, an Antioch alumnus and associate professor, was named creative director of Herndon Gallery this summer. (Photo by Lauren "Chuck" Shows)

This summer, artist and Antioch College Associate Professor of Sculpture and Installation Michael Casselli was named the creative director of the on-campus Herndon Gallery. Though the role is new, Casselli is by no means new to the Antioch or wider Yellow Springs communities. An Antioch alum who has been involved with the college for nearly 15 years, Casselli told the News that he aims to weave both of those communities — and more — into his vision for the gallery moving forward.

From his office on the gallery’s second floor this week, Casselli looked down at the airy space below, which is currently hosting “Flourishing,” part of Cincinnati-based Fotofocus’ biennial exhibition series. The exhibition is on display through Saturday, Dec. 3. According to the gallery’s website, “Flourishing” aims to depict “a more complete image of the Black experience outside of the tragedies romanticized across the media.” Curated by Cincinnati artist Asa Featherstone IV, the exhibition’s media include portraiture, video, archived stories and fashion.

Casselli said he believes involving visiting curators and a wide range of artists is important for Herndon Gallery — not only so that the work displayed there isn’t reliant on a single aesthetic vision or taste, but also so that artistic voices that might otherwise be muted are, instead, amplified.

“I’m really interested in opening [the gallery] up to marginalized communities — people who’ve been personally held to the sidelines or not supported,” he said. “That’s a strong part of our mission. I’m working toward engaging not only the college community, but also more in Yellow Springs and further out.”

Casselli’s own history as a student and artist reflects the kind of open, oft-shifting energy he said he hopes to instill in the gallery. A Cleveland native, in his youth he completed his secondary education as a student of Cleveland Urban Learning Community, an experimental program in which students steered their own educations through discourse with community members and had a large hand in school governance. He worked for several years in kitchens during and after his teenage years, moving from dishwasher to line cook to saucier to pastry chef before deciding to shift his focus.

“I got sick of being in the kitchen — because it’s a horrible place,” he said.

At 21, he visited a fellow former Cleveland Urban Learning Community classmate at Antioch College, where they were a student. Emboldened by the college’s democratic structure and open approach to education, he applied and was accepted — on the condition that he complete a semester of community college coursework.

Studying art at Antioch College exposed Casselli to a new network of other creative people with whom he collaborated, both during and beyond his years as a student. It also enabled him to begin the journey of finding his own approach to artistic work as he completed his self-designed major in visual art performance theory. He described one piece that involved a large number of people, performed on the “golf course” near the Foundry Theater, which incorporated video projections and recorded audio.

“My style of work at that point was I would do a lot of recorded interviews of people around a subject that was connected to the larger piece, and then I would edit those recordings and then play them back while the piece was happening, to kind of shift people’s focus as to what they were seeing in front of them,” Casselli said.

After graduating from Antioch in 1987, he spent a few years building sets for Cleveland’s Great Lakes Festival and studying sculpture at the Rhode Island School of Design before moving to New York City. Soon, he began working at The Kitchen, a nonprofit, multidisciplinary experimental arts venue founded in the 1970s that boasts such alumni as musicians David Byrne and Brian Eno and photographer Cindy Sherman. (The Kitchen currently works cooperatively with the Herndon Gallery.)

Casselli said the artists he met at and through The Kitchen were people he would work with for the next 15 years of his life. He did freelance work in production, set and video design, working with artists who included the late Jonathan Larson, most famous for penning the musical “Rent,” with whom Casselli helped stage a public outdoor performance of “J.P. Morgan Saves the Nation” on Wall Street.

Casselli also spent time touring with fellow artists in South America, Europe, Asia and Australia, presenting collaborative performance art that he said had a difficult time finding venues and audiences in the U.S.

“There was a lot of nudity, a lot of bad language, a lot of loud music, a lot of critique of American culture,” he said. “Some people couldn’t follow it.”

He spent five years teaching in the CalArts theater program, heading up production management and technical direction before returning to New York to work in Fordham University’s theater program and then the New York Theatre Workshop, where he went on to hire many of his former CalArts students. Casselli’s tenure with the workshop ended when its board of directors fired all the production staff following budget cuts in 2008 — the same year Antioch College announced its closure.

“It was my 20th reunion, so I thought I’d check it out. Two weeks before the reunion they announced the closure — so I came down and started getting involved,” he said.

Casselli’s tenure with the college has stayed constant since then, working during its closure with the Nonstop Institute and as an instructor upon its reopening. As an educator, Casselli said his pedagogy doesn’t stray far from his own educational background — or his artistic approach.

“I’m really interested in project-based work, the opportunities to investigate something,” he said. “​​My approach to teaching really is, ‘Here’s some stuff — play with it.’”

In his own work, Casselli said he likes to explore in and around a panoply of materials — he’s learned and experimented with woodworking, ceramics, metalwork and even electrical currents, among other media, in his approach to understanding art less as modality than as philosophy.

“Art can be a lot of different things — art is the way you’re thinking about what you’re doing,” he said. “You’re approaching a subject or context. And then you’re presenting work that addresses that context.”

He considered a piece he had intended to present in a small gallery located in the living room of a Dayton home. The installation, titled “A Tacit Agreement,” positioned a metal crucifix-like structure in sight of a replica of a table used for lethal injection, which itself is crucifix-shaped. It was scheduled to open for public viewing in early 2020 — but the opening was canceled due to the pandemic, and the installation remained in the home. Though “A Tacit Agreement” lives now only in documentation and has never opened to the wider public, Casselli considers its time on display only for the home’s occupants to be part of the work itself.

“This piece put into question the death penalty and the symbolism of the cross … and then [the owners of the home and gallery] had to live with it for three months,” Casselli said. “I didn’t realize how that would strengthen the piece.”

Putting people and places in dialogue with art — and one another — is also crucial to Casselli’s vision for the Herndon Gallery as he looks toward 2023.

In January, he aims to present a one-day exhibition of 13 pieces by “returned,” or formerly incarcerated, artists, in collaboration with World House Choir Director Catherine Roma. The following month, he plans to open the gallery as a project space for “Visible Roots: Rootwork as Ancestral Living Cultural History,” which will feature community artists working collaboratively in disciplines that weave an understanding of ancestry and the African diaspora together with elements of rootwork.

For those and future exhibitions, he is working on instituting a new series of panel discussions, “Herndon Speaks,” between artists and gallery patrons.

“​​There’s a lot of people making work, there’s a lot of stuff going on — but it feels a little disconnected,” Casselli said. “If we can mix people from the college with people in the village who are interested [in collaboration], I think that’s really important.”