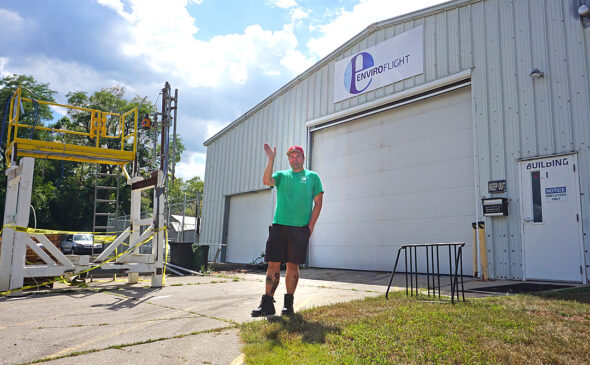 After 13 years of operations, EnviroFlight left Yellow Springs in September. Founded in the Millworks industrial park in 2009, company produces animal and plant feed made from black soldier fly larvae. Millworks employee and now former village resident Dan Black is shown here on one of his last days in Yellow Springs — he followed the company to its new location in North Carolina. (Photo by Reilly Dixon)

In January, the Wellness Center at Antioch College reopened to the public after nearly two years of closure. The event was marked with a celebration that included food trucks and a temporary climbing wall. The center had previously reopened to students in October 2021.

After 13 years of operations, EnviroFlight left Yellow Springs in September. Founded in the Millworks industrial park in 2009 by Glen Courtright, the sustainable agriculture company produces animal and plant feed made from black soldier fly larvae. EnviroFlight’s operations have now moved entirely to the company’s headquarters and main production site in Maysville, Kentucky., and a newly opened research and development site in Apex, North Carolina.

Since EnviroFlight’s inception, the company has provided Yellow Springs nearly 30 jobs and generated hundreds of thousands of dollars in utility payments and income taxes. Now, between the Maysville and Apex sites, the company currently employs nearly 70 people. 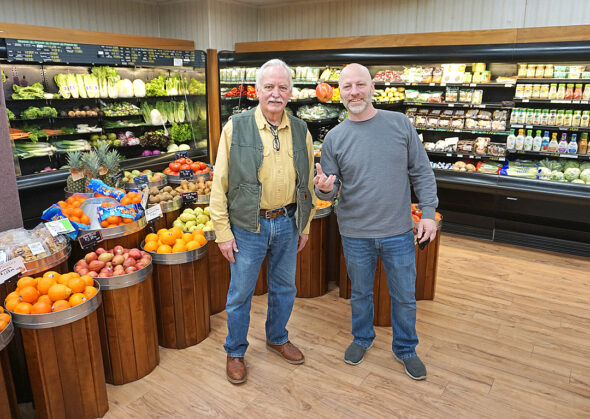 The apple doesn’t fall too far in the Gray family. After 57 years of working in Yellow Springs’ downtown grocery — first when it was Luttrell’s, then Weaver’s and later as his own Tom’s Market — proprietor Tom Gray is retiring. Taking over is Gray’s youngest son, Jeff Gray. A village native, Jeff Gray recently moved back to town from Phoenix, Ariz., to take his father’s reins at the store. (Photo By Reilly Dixon)

• One of Yellow Springs’ oldest businesses, 72-year-old Anthrotech, changed ownership; previous owners and villagers Bruce Bradtmiller and Carol Cottom sold the Xenia Avenue business to Loveland resident Oscar Meyer, now serves as both Anthrotech’s owner and its president. Bradtmiller, who was previously Anthrotech’s president, remains to aid Meyer in the transition and will phase out his involvement through 2023. The business focuses on research and consulting around anthropometry, the study of the dimensions of the human body.

• After 57 years in the small-town grocery business, Tom Gray, of Tom’s Market, retired in early 2022. Gray began working at the hometown grocery store, then Luttrell’s, in 1965 while in high school, and later returned to manage the same store, renamed Weaver’s. He bought and renamed the store in 2002. Gray’s youngest son, Jeff, took the reins from his father, having moved back to Yellow Springs after spending 23 years in Phoenix, Arizona. 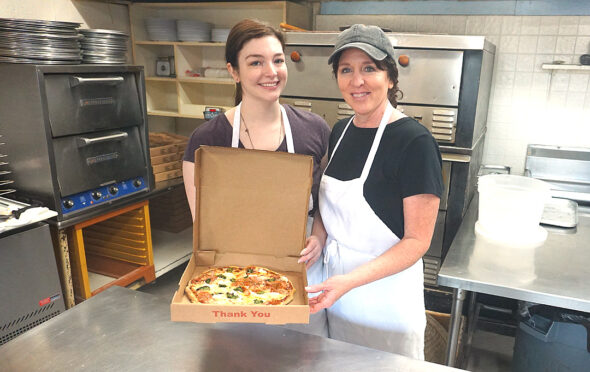 The mother-daughter pair of Karen (right) and Megan (left) McDonald recently took ownership of Ha Ha Pizza. The duo purchased the 47-year-old pizzeria from B.J. Walters, who has been with Ha Ha for 25 years, the last 17 as owner and operator. The McDonalds plan to continue the restaurant’s legacy of serving unique pizza pies to the village and beyond. (Photo by Reilly Dixon)

• Karen and Megan McDonald, of Fairborn and Enon, purchased Ha Ha Pizza, which had been on the market since late 2019. The 47-year-old business was sold in June by longtime owner and operator B.J. Walters, who had been with the local pizza parlor for 25 years.

• In March, villager Eric Clark closed the fossil shop, Rock Around the Clark, after selling its stock to Fairborn resident Frances Coynes. The store closed soon after the sale. Coynes, who operates Coynes Crystals in downtown Fairborn, continued to sell the fossil shop’s wares in her own store and on Dayton Street, where she is a frequent street vendor.

• In late April, villager Jayne Brahler opened The Veganry, a restaurant focused on vegan dishes, in the Kieth’s Alley location that had formerly housed Epic Books. Brahler, who retired from University of Dayton this year, previously sold her Black Barn Veganry ice cream at the Emporium.

In August, Brahler announced that she had closed the restaurant and sold its assets to local residents Angie Hsu, Matan Mazursky and Kumar Jensen. The trio of new owners opted not to purchase Brahler’s menu, but said the new restaurant, which has not yet been named or opened, will continue as a vegan establishment and feature Black Barn Veganry ice cream. 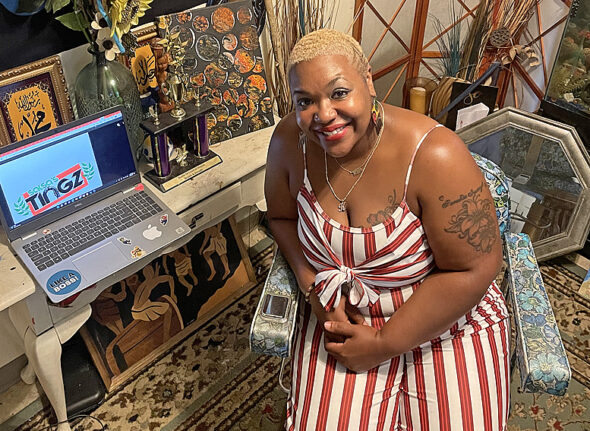 • After three years of operation on Dayton Street, The Greene Canteen eatery closed at the end of June. Owners Brittany and Tim Baum, who cited a desire to focus on “personal health and happiness” as reasons for the restaurant’s closure, sold the restaurant’s assets to Miguel Espinosa, who also owns Miguel’s Tacos.

In July, Espinosa opened Miguel’s Poke Island in the space formerly occupied by The Greene Canteen. The new business, which sells poke bowls as well as Asian-inspired sushi burritos, ramen, curry and boba, closed in November for the winter to reopen in spring 2023.

• In September, the Subway at the corner of Xenia Avenue and Corry Street closed. At the same time, the building in which the sandwich shop had been operated was bought by Carl and Kim Lea, the owners of Bentino’s, which had been Subway’s neighbor for 16 years.

• In December, wellness and healing practice Rising Holistic, owned by villagers Jessica Holihan and Shaun Craig, opened a new, 1,800-square-foot facility on Cliff Street in a building that previously housed Bushworks. Rising Holistic relocated from its previous location at The Healing Center on Xenia Avenue and aims to expand its offerings.