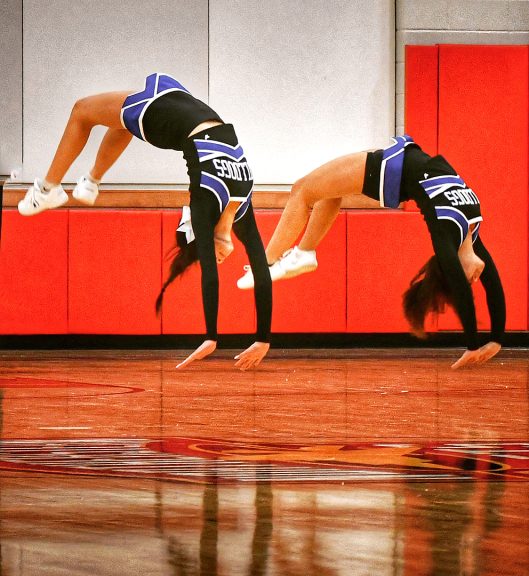 At a Bulldogs basketball game last month, when the boys varsity team took on Northeastern, a pair of YS cheerleaders dazzled the crowd with their impressive acrobatic feats. (Photo by Michael Knemeyer)

The Bulldogs faced off against West Jefferson on the opposing team’s home turf on Dec. 30, for a narrow victory at 49–47. Starter Antonio Chaiten led the team in scoring with 11 points, followed by Landon Harris and Shawn VanHoose, who each scored eight. Eli Eyrich netted nine assists for his teammates, and VanHoose racked up seven rebounds.

The winning margin was larger at the Jan. 3 home game, with the boys scoring 57 points to Spring Valley’s 46. Individual stats were not available at press time. The team’s current conference record is 0–4.

A celebration for the 2016 boys basketball district championship team will be held at halftime during the Jan. 6 home game.

The team’s current season and conference record is 0–3.

The Yellow Springs High School boys bowling team faced a slim defeat when it resumed the season on Tuesday, Jan. 3, falling 1,762 pins to Emmanuel Christian’s 1,776. Krishan Miller was the leader for pins, netting 387 across two regular games in the match; the team’s five players averaged 352.4 across both games.

The team’s current season record is 2–2, with a conference record of 1–2.