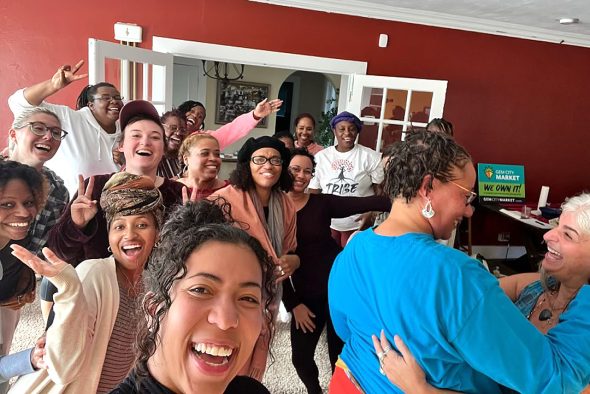 In January 2022, a News article about villager Amy Chavez’s evolving work as a doula engaged in birth education workshops and training, described the concept of “giving birth” metaphorically — the birthing of new ideas, celebrating new beginnings such as the new year, a new job, or personal transformation journey.

Approximately nine months later, the idea for a shared services cooperative for area doulas working across the Miami Valley that Chavez had been gestating for years was finally birthed from a labor process that began in 2019, after a mentorship and training program called T.R.I.B.E. — an acronym for Trauma and Resiliency Informed Birth Education — received funding.

A $28,000 W.K. Kellogg Foundation grant written on behalf of T.R.I.B.E. by the nonprofit Co-op Dayton, which helped the organization form, and an additional $70,000 grant from Northwest Dayton Partnership, enabled T.R.I.B.E. last October to launch a nine-month pilot program that is geared toward bolstering the health and wellbeing of healthcare practitioners — particularly doulas — through a “trauma-informed strategy” that involves training practitioners in trauma-informed principles that prepare them to respond to, and support patients who have experienced trauma.

In the written description Chavez provided to the News, the cooperative “is an emerging interdisciplinary intersectional perinatal and parenting support” group of professionals from different arenas in the healing community. The group includes “doulas, nurses, bodyworkers, therapists, childbirth and parent advocates, and educators.” The pilot, with 21 healthcare practitioner participants, will conclude in July 2023.

In a recent interview with the News, Chavez said part of the program involves taking healthcare workers who work in a sector prone to burnout through a healing process.

“What I was realizing was that the role of bringing trauma-informed care deeply into the perinatal space meant I felt very convicted by the need to support the care providers — ‘healer heal thyself,’” Chavez said, adding that she is very specific about how she uses language related to trauma.

“When I use the word ‘trauma,’ [I’m] really talking about dysregulation of the nervous system in a way that causes dysfunction,” she said. “The root of all traumas is our biological imperative for safety and belonging.”

Chavez said being trauma-informed means that a practitioner understands the role trauma may have in a person’s lived experience.

“We center the six principles of trauma-informed care which are, safety, trust, empowerment of voice and choice, mutuality, and collaboration and understanding of historical trauma with the engagement of peer support,” Chavez said.

Chavez also emphasized the collective decision-making aspect of the group. The organization and implementation of programming, she said, are shared responsibilities of the healthcare workers in the healing community who are brought into the collective, whether they are local or come from elsewhere in the country or the globe.

According to Chavez, participants meet once a month for training, and twice a month for peer support circles for parenting, young (teen) parents, prenatal yoga and childbirth education. Participants will also receive training through a collaborative integrative care program for 7–10 pregnant people in Northwest Dayton through a pregnancy, birth and postpartum program.

T.R.I.B.E. is the physical manifestation of a process Chavez began in 2016 as a Ph.D. student in Antioch University’s Leadership and Change program. Looking for an alternative economic and social framework for providing community-based healthcare, Chavez first began exploring the Mondragon cooperative economic system, on which the Co-op Dayton model is also based. According to the Mondragon website, the model, established in Spain in 1956 by Father Jose Maria Arizmendiarrieta, “operates under the values of participation, innovation, social responsibility, and cooperation.”

“I was exploring the different kinds of cooperative models of economy, including worker-owned cooperatives such as the Gem City Market, and shared services cooperatives, a different form of cooperative, which is the one that I felt most resonant with,” Chavez said.

Chavez said she then wrote a case study on leadership within a cooperative framework for offering community-based healthcare “and the places where [her] work inside of the community didn’t feel like it fit with the current structure in place.” Through that process, she concluded that a cooperative for doulas based on a shared services model could work because of the relational aspect of the profession.

Chavez said that, historically, birth support was provided by people who were part of the community, and that the role of the doula emerged from the need for emotional, informational and spiritual support during the birth process.

Chavez, a doula for 24 years, said the work she’s done in that role continues to put her in “very intimate places inside of people’s stories.” She estimates that she’s participated in the birth of around 900 babies, many of them from Yellow Springs, and said there is a strong need for a support system for doulas and other healers.

“One of the pieces about the cooperative I think is so important is that I’m not alone,” she said.

The T.R.I.B.E. cooperative is also an attempt to shift from an unsustainable healthcare model that burdens doulas. According to Chavez, the current healthcare system is centered on a heroic model, meaning that one doula is supposed to know just about everything about what a pregnant person will need for their care — including procuring healthcare services that often don’t fall within the practitioner’s area of expertise.

“You’re the one on call. It doesn’t matter if your kids get sick, it doesn’t matter if you get sick, you’re the one,” she said. “And so, part of our answer to that is this ‘T.R.I.Pod.’ model, which stands for ‘Trauma and Resiliency Informed Pods,’ and means that everybody in the training learns the six trauma-informed care principles and some somatic resiliency practices.”

The pod concept means that small teams are formed to assist in the birth process, doling out work like prenatal massage, cranial sacral, trauma healing, childbirth education and support for labor, postpartum and breastfeeding among several people instead of just one. She added that engaging resiliency practices is also necessary for healing work.

“What makes us resiliency informed is also what we do with the information, not just seeing trauma and understanding it, but understanding how healing happens, and how we can be vehicles for healing,” she said.

Chavez also strongly emphasized the multicultural aspect to the collective, predominantly composed of African American women who entered into doula work with a specific desire to reduce the high mortality rate for Black infants and mothers in Montgomery County.

“Its intention is to be multicultural, because historically, doulas have been seen as a luxury item — which means of course, they’ve mostly been for white women, wealthy white women,” she said. “Yet culturally, Black women still had their sisters come in with them, they still had their aunties coming with them. They just weren’t necessarily going and doing these trainings to become doulas — it was just what we do as women.”

Chavez added that, when the role of doula began to be acknowledged as a profession, it was mostly because the field was inhabited by middle-class white women of economic means, who often offered their services within a volunteer capacity.

“I struggled in Dayton just trying to make a living because most people before me that were doulas were nurses or with husbands — it was a service, a hobby that people would do,” Chavez said.

“The model that sort of emerged for that was the nonprofit model, which then puts you dependent upon grants,” Chavez said. “I was very clear that the solo fee for service model wasn’t sustainable. … We need more access [to doulas], but the part of the missing conversation is sustainability for the people providing all that access.”

As a white-bodied health professional, Chavez said she couldn’t buy into the narrative related to maternal and infant mortality rates in the African American community, because the conversations were often exclusionary and marginalized — particularly when considering that African American mothers and infants utilize the same birthing rooms in the same hospitals as white women, but experience drastically different health outcomes.

The 2020 Annual Report from the Ohio Department of Health illustrates this disparity. Per 100,00 live births in the state, 12 Black newborns died, whereas 6.8 white newborns died.

According to Chavez, T.R.I.B.E. has four aspects of growth happening at the same time: trauma-informed training, professional peer support, the creation of collaborative content and an interdisciplinary pilot program.

“The idea is that in the summer, at the end of the pilot, we will have really good data from the practitioners about how going through the training impacted their professional practice, what’s different now, what collaboration is like,” she said. “Then we’ll have the data from the community members who’ve gone through the circles and received the care.”

*Cheryl Durgans participates in the pilot program as a body worker.

One Response to “T.R.I.B.E pilot program to support health workers”