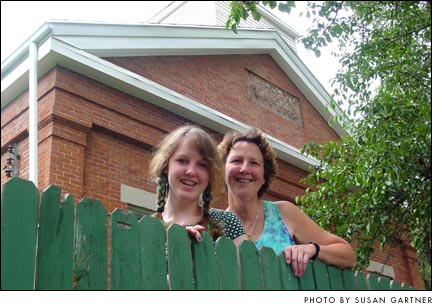 The home of Krista Magaw and her daughter Anna Carlson is featured in this Sunday’s Summer Bloom and Bounty tour. The event, a fundraiser for the Antioch School, costs $10. Tickets may be purchased at Current Cuisine, Sam and Eddie’s Open Books, Greenleaf Gardens and Stutzman’s Garden Center.

The flower names from the various gardens read like a class roster from Antioch School. In one “classroom” there is Veronica, Spiraea, Yarrow and Daylily along with the Hosta triplets — Janet, June and Francee. In another classroom you’ll find Monarda, Caladium, Heuchera, and Hibiscus and “down the hall” is Moonbeam, Penstemon, Dianthus, and Sundrop.

These and other lovingly nurtured endeavors are all part of the Yellow Springs 11th annual Summer’s Bloom and Bounty Garden and Home tour, which takes place Sunday, June 29, from 1 to 5 p.m. Tickets are $10 each and are on sale at Current Cuisine, Sam and Eddie’s Open Books, Downing’s Do It Best Hardware, Greenleaf Gardens and Stutzman’s Garden Center. Proceeds from the tour support the Antioch School Scholarship Fund. For more information, call Lynn Sontag at 767-2491.

Sontag, whose two sons are graduates of the Antioch School, has coordinated the past four home and garden tours and is working with Regan Parker this year to provide several new twists to the standard theme.

Curiosity-seekers intrigued by the concept and logistics of a house made of straw may view the inside of one of three local straw-bale houses built by Andy and Beth Holyoke. Owned by Antioch School teacher Lindie Keaton and her partner, Joel Smith, the construction of the earth-friendly, energy-efficient home was a community event in the fall of 2006. Friends, family, and villagers turned out to help stack, cut, and position the straw bales into the post and beam structure, then later returned to help plaster and paint the interior and exterior walls.

Another first will be the community supported agriculture (CSA) garden started by Andrew Manieri, who was pleasantly surprised but honored to be a part of this year’s tour.

“Yellow Springs is blessed with several CSAs,” explained Manieri, whose garden supplies vegetables for 16 families once a week for 20 weeks. “Our techniques are very unusual,” he said. “We don’t till the soil so it ends up being in full bloom with lots of weeds and clover and things that most people find undesirable but to us are very desirable. It’s actually a very productive vegetable garden.”

The term “garden” is actually more appropriate than “farm” because of the scale of a typical CSA. “It’s not a huge area that’s being cultivated,” said Manieri. “That’s the idea — to get these gardens started all over the place.”

More than the garden itself, Manieri is excited about the tour’s educational potential for future vegetable gardeners. “We prepare as small of a space as we can for the plants and disturb the habitat as little as possible so it ends up looking a lot like a meadow,” he said. “People certainly wouldn’t expect a place like that to be on a gardening tour.”

Another highlight will be the old Baptist church on Xenia Avenue which was converted to a residence in 1997 when it was purchased by Andy Carlson and Krista Magaw. This year, both house and garden will be open to ticket holders.

“I do art and collect art and it’s wonderful as a studio with big walls to hang things on,” said Magaw, the director of Tecumseh Land Trust, describing the unique layout of their home. “It’s big on open space.”

Originally the Anti-Slavery Baptist Church, the building’s history was part of its appeal and a feature that Magaw and Carlson try to honor. But there was also the challenge of making a public space private when they took possession.

“Our daughter, Anna (an Antioch School grad), was 5 when we moved here,” said Magaw, “and we wanted to have a nice safe place for her and her friends to play. We wanted a little protection from [U.S.] 68 so we ended up putting a fence around the place.”

Avid gardeners, Magaw and her husband are outside every moment of daylight in spring, summer, and fall, tending to flowers and vegetables. The addition of a grape arbor also added some privacy. “It’s amazing to look at pictures of the way [the grounds] used to look,” she said. “It was well mown but a pretty wide open space. We definitely have done a lot.”

The biggest bounty of this year’s tour, however, is the proximity of the featured sites, which makes for a perfect summer outing and response to the high price of gas.

“It would be pretty easy to bike to all of the homes,” said Sontag. A suggested route is provided with the self-guided tour but participants may visit the sites in any order during tour hours.

In the same way that an Antioch School classroom and its charges are lovingly shaped and influenced by each teacher, each tour site is a unique reflection of its owner. Whether informal or formal, rock, wild, or water, ornamental or food-producing — this year’s tour has something for all.