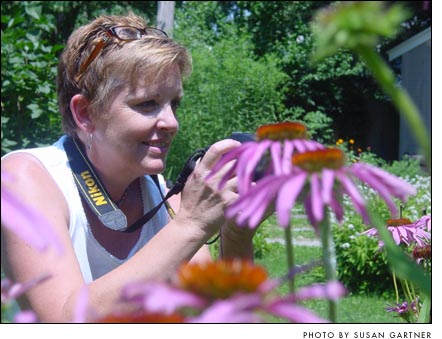 Photographer Mary Kay Clark tries for the perfect shot in her garden. Photographic artwork by Clark and Michigan photographer Kathy Ortwine will be on exhibit at The Emporium for the month of August. An opening reception will be held Saturday, Aug. 2, from 5 to 7 p.m., with music by the Kennedy Quartet.

A worldview of life through the lens

“I was doing a wedding once,” explained photographer Mary Kay Clark, as she prepared for an upcoming exhibit, “and I noticed in the chrome around the headlamp of a vintage Triumph car was the reflection of the church where the couple just got married. Where did I focus? Not on the couple but on the headlamp. I was clicking away and the couple was yelling, ‘Hey — we’re over here!’ I told them, ‘You’ll just have to wait!’”

The results of this serendipitous moment and others Clark captured on film and memory card will be on exhibit at The Emporium for the month of August. An opening reception will be held Saturday, Aug. 2, from 5 to 7 p.m.

An added bonus to the evening will be a special guest appearance by the Kennedy Quartet, a group comprised of three musicians from Springfield and local violist Suzanne Smailes. The string quartet was formed in 2003 by Dr. Tom Kennedy, a professor of music at Wittenberg University who died in 2007 from a brain tumor.

Although she was always a fan of photography, Clark didn’t take the art seriously for herself until six years ago when she went on a camping trip to Alaska with her long-time friend, Kathy Ortwine, a professional photographer in Michigan.

“That’s when I looked through the lens at Alaska,” said Clark of that life-changing trip.

The experience made her look at things much more deeply. “When you become a photographer,” Clark explained, “you notice a lot of things that other people miss. You see the little bug on the bush. You see the differences in the leaves. You see so much more.”

The experience was so profound that when Clark returned home she immediately went out and bought herself a new camera.

“I owe my interest in photography to Kathy, so it was only natural for me to ask her to do the show with me,” said Clark.

Just like the butterflies that she photographs, Clark flits from one creative endeavor to another. In addition to photography, her garden of talents includes playwriting and directing for YS Kids Playhouse, graphic design, video presentations and brickwork.

“I have a problem in that I like to do so many things and it’s hard to figure out where I need to land,” said Clark.

Is there a downside to seeing art in everything?

“I have taken shots while driving,” Clark admits sheepishly. “I think people would like to hear that I pulled over to take the shot but sometimes I have taken shots out of my car window because they are so amazing.”

“I’ve got the picture in the Glen of those little mushrooms all in a row,” she said. “It looks like these school kids all lined up for lunch on this log. But the next week I was in the Glen and they were gone. Plus the lighting was amazing. The sun was coming through the trees which created beautiful lattice.”

The exhibit is titled, “Composition in Color,” and will be Clark’s first exhibit.

“I was telling someone that I do a lot of art through theater, but I’ve never shown my photography in public,” said Clark. “It’s kind of like running naked. You’re exposing yourself. What I think looks good I will often second guess after I’ve matted and framed it. I’ll ask myself, ‘Will this be loved like I love it?’ That’s really scary!”

Photographer Mary Kay Clark can be contacted at mkclark32@sbcglobal.net. For more information about the Kennedy Quartet, contact Katie Harford at 937-207-9939 or katie_harford@yahoo.com.