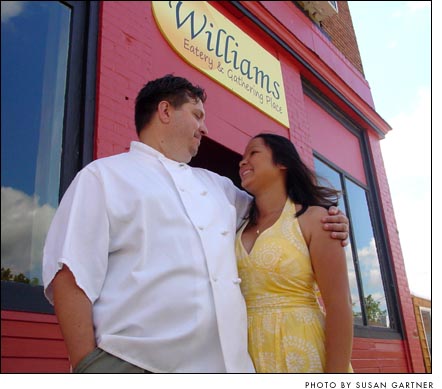 Lawren and Diana Williams of Fairborn are opening their new restaurant, Williams Eatery and Gathering Place, at the beginning of this month. The restaurant, on the corner of Corry and Dayton streets, will feature both American and Peruvian food.

“I was always drawn to the preparation of food,” said Lawren (“Lawrence without the c-e”) Williams. “My mom says some of her fondest memories of me are when I was real little and was always trying to create dishes. None of them were any good — I just liked the idea of preparing food!”

Adding to his mother’s fondest memories will be the opening of her son’s new restaurant, Williams Eatery and Gathering Place, this week. The restaurant is located at the corner of Dayton and Corry Streets, the former site of the Gypsy Cafe.

Williams is a fourth-generation restaurateur, having learned the industry from his father, grandfather, and great-grandfather. He previously owned the Broad Street Grille in Fairborn but after selling his share to his partner, Williams set his sights on starting his own restaurant in Yellow Springs, a town that is near and dear to him.

“I was born and raised in Fairborn,” he said in an interview while construction of Williams Eatery was still underway, “but I’ve been coming to Yellow Springs since I was a little guy. I remember when I turned 14 and got a moped. I used to take the back roads into Yellow Springs and hang out here all the time. I’ve always been a fan of this area. I’m real excited about being a part of the community.”

Williams Eatery and Gathering Place will be a family-style restaurant serving a menu that is half American and half Peruvian. “Just like my family!” Williams laughed.

Williams met his wife, Diana (pronounced Deana), when he was opening a restaurant for a corporate chain in Cincinnati. He fell in love with her immediately and hired her to work at the restaurant. Originally from Ica, Peru, Diana would bring him traditional foods she had prepared. In short order, Williams became hooked — emotionally and gastronomically.

“The first time I had carapulcra limeña [a featured item on the menu], I was like ‘Wow,’” said Williams. “It’s roasted pork and potatoes and this peanut sauce all mixed together.” Then she made him chicha morada, a Peruvian drink made with purple corn, cinnamon, cloves, lime and pineapple juice — also on the menu.

Other traditional Peruvian entrees include cebiche (marinated fish, shrimp, and calamari prepared in lime juice and aji peppers) and tallarines verdes with bistek (a fresh spinach and basil pesto sauce served over noodles and topped with a very thin but large cut of choice steak). Pasta vegetariana features a traditional sauce of tomato, onion, carrots, garlic, and tuco spice.

Both cultures are equally represented on the menu. There will be seasonal foods, daily specials, and American classics such as “great-hot-smokin’-fall-off-the-bone ribs.” What won’t appear on the menu is liquor.

“We want to be family-driven,” said Williams, father of two small children. “We want to support the schools and the kids. One of the things we did at the Broad Street Grille was work with the high school soccer team. We fed the team once a week.” He hopes to be similarly involved in Yellow Springs.

As a testament to his commitment to the community, Williams invested time, labor, and money renovating the lower half of the building that houses his new restaurant. He also brought the “greenhouse” up to code, replacing floors, windows, ceiling, and cedar siding. His landlady, Drenko Pureval, who also owns the Tibet Bazaar gift shop in King’s Yard, purchased the building in December 2006. Pureval is thrilled with her new tenant’s efforts and hopes the restaurant will bring new life to that section of the downtown area.

“Everyone in the village has been really great trying to move this process along,” Williams said. “Drenko is awesome. She’s been a real help getting things going with all the renovations.”

Although the name of the establishment may be a mouthful, Williams gave it a lot of thought. “I have so much pride in my family,” he said. “But all the times we’ve opened a restaurant it’s never been named after us. I always tell my cooks and the people who work for me, ‘You should want to serve a plate of food where if you had to sign your name on the plate as it went out of the kitchen, you would be okay with that.’ There’s nothing more important than your name, your family. It’s time to live up to that.”