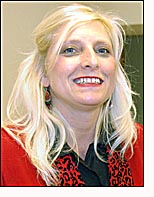 Nancy Benroth is the third candidate for Village Manager. (photo by Diane Chiddister)

In some ways Bluffton, Ohio, is a lot like Yellow Springs, according to Nancy Benroth, on Monday night. Benroth, who has worked as the assistant village manager of Bluffton for 11 years, spoke to a group of about 25 villagers on Monday, Oct. 20, in the third and last public forum to feature manager candidates.

Last week Randy Bukas, current village manager of Germantown, came to town for an interview, and the week before, Mark Cundiff, planning director of Troy, visited Yellow Springs. Council will meet in executive session on Saturday, Oct. 25, to discuss the manager position and could possibly choose the candidate who will replace former manager Eric Swansen.

What’s similar regarding Bluffton and Yellow Springs is a focus on a vibrant downtown, Benroth said, in response to a question regarding the location of Bluffton High School in the town’s center. While some Bluffton residents favored moving the high school, the majority wanted to keep it close to the center of the community.

“The citizens want to keep it where it’s at,” she said. “We try to keep the downtown accessible. People in Bluffton like to walk and ride their bikes.”

Another effort toward revitalizing downtown focused on refurbishing the community’s historic town hall, Benroth said. Even though the cost of tearing the building down was half that of refurbishing it, the majority of the town’s citizens voted to rehab the old building by approving a citizen-led referendum that called for adding .25 to the town’s income tax.

But there are significant differences between Yellow Springs and Bluffton, which is home to a Mennonite college and a large Mennonite community. Though not a Mennonite herself, she has found the town “a good fit” with her own priorities, Benroth said, because the Mennonite emphasis on preserving green space and natural areas squares with her own.

The Mennonite influence means that Bluffton is a much more politically conservative town than is Yellow Springs, but she is comfortable with that difference, according to Benroth, who said she believes a public administrator should keep political views to herself.

“I don’t stick signs in my yard or give my opinions,” she said.

Currently, her job involves overseeing work on Bluffton’s streets, parks, sidewalks and trees, according to Benroth, who previously spent eight years as the budgetary and payroll clerk for the village of Ottawa, Ohio. She has a bachelors in public administration from the University of Findlay and an associate degree in applied business.

She is seeking a new position because she wants more of a challenge, and she also wants “to make more money, an amount that fits my degree,” she said.

She was attracted to Yellow Springs due to its size and location about two hours away from the home of her parents and siblings, according to Benroth, who is married, with two almost-grown children, and two stepchildren. In perusing the Yellow Springs Web site, she sought out first information about parks, then about churches, and then about exercise facilities, Benroth said.

The greatest challenges facing Yellow Springs include the need for more economic development efforts, especially needed in the face of the closing of Antioch College, and funding large projects such as the repair of the wastewater treatment plant. On a personal level, Benroth said that, if she gets the manager position, she would be faced with “a catch-up issue, since I’m not from here.”

Regarding what sort of economic development efforts she would encourage the village’s visioning task force to pursue, Benroth said that the task force first needs to clarify the desires of the community.

“You have to decide what the residents here are looking for,” she said.