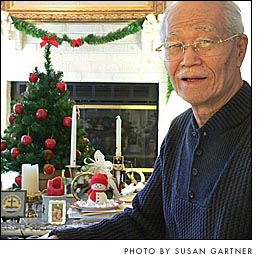 Villager Matt Ishihara was surprised by two secret Santas, who brought him 25 gifts to open each day until Christmas. The gifts have helped to lift his spirits during the first holiday season since the death of his wife.

“Oh!” he exclaimed as he unfastened the Velcro band and a deep navy and green plaid Microplush blanket immediately unfurled in his lap.

Ishihara had been opening presents, one each day, since Dec. 1 and today was the 11th. There were still lots more presents to come — 25 in all.

Who was the donor of such a generous gift?

“I don’t know,” he said, shaking his head and smiling. Five days later, as this story goes to press, he still doesn’t know.

The day before Thanksgiving, Ishihara was sitting in his living room in his favorite chair, enjoying a good book, when the doorbell rang. He went to open the door and there stood a couple he did not know, holding two large bags and two large cardboard boxes filled with individually-wrapped presents of all shapes and sizes. The couple said they were there to deliver some presents.

“I thought they made a mistake,” he said. “I never expected Christmas gifts.”

Typically a very gracious and welcoming host, Ishihara is embarrassed about his response. “I did not give common courtesy,” he said apologetically. “My brain became all of a sudden numb. I was in shock.”

The details remain hazy. Overwhelmed by the sight — even days later —- he vaguely remembers asking the couple, “Who did this?” and one of them answering, “A friend.” The bags and boxes were set on the floor of his front hall and there they remained while Ishihara tried to go about his usual routine, reading, receiving Meals on Wheels, and listening to classical music. After a time, he’d look across the room at the packages that would twinkle and wink at him from their cardboard box, and think, “Who did this?”

He was certain it was all a mistake. Soon someone would call or come over to retrieve the packages and clear up the confusion.

But that never happened.

Finally, after the third day, Ishihara walked over and started looking through the pile. He discovered 25 gifts, each with its own tag carefully handwritten with a date and instructions such as: “Open 12/13” or “Open 12/20.” But there was one gift that stood out from the rest. Handwritten on that present (in addition to “Open 12/17”) were the words, “To: Matthew, From: ?”

Matthew Ishihara was born in Tokyo in 1933. In his early 20s, while he was working as a tax appraiser for the Japanese government, he met the woman who would later become his wife, Gwyneth Jones, the daughter of Welsh missionaries.

Ishihara came to the U.S. in 1963 with a dream to study theology and become a minister. He attended Central State University in Wilberforce and on Sundays would bike to the First Presbyterian Church in Yellow Springs to attend morning service. After graduating from Central State, he and Gwyneth moved to Louisville, Ky., where he pursued his masters of divinity at Louisville Presbyterian Theological Seminary. In 1970, the couple came back to Yellow Springs to be married at the First Presbyterian Church.

After graduating from seminary in 1972, they moved to California where Ishihara was ordained and served as minister of two Japanese churches, a Baptist church in Sacramento followed by a Methodist church in Fresno. The work was fulfilling but the salary meager. In 1978, they moved back to Yellow Springs where he got a job with Vernay Laboratories, Inc. while his wife worked as a nurse’s aide in Xenia and then at Friends Care Community.

In the early and mid-’90s, Gwyneth suffered two strokes and became increasingly dependent on her husband for daily assistance. After suffering a heart attack and undergoing triple bypass surgery himself, Ishihara retired from Vernay in ’98 and devoted himself to his wife’s care for the next 10 years until her death in April of this year.

“She is so interested to take care of people,” said Ishihara about his wife of 38 years. “That’s her beauty.”

It’s still difficult for Ishihara to speak about his wife. The last few years were particularly hard on both of them as Gwyneth became less and less able to care for herself. He struggled to keep up their involvement with the Presbyterian church, where they were known to show up in matching plaid sport coat and blazer. The couple never had children so the congregation became their extended family. Church members continue to look in on him and take him out for meals or to shop and run errands.

Once Ishihara realized that there was no mistake and that the pile of presents was actually intended for him, he was overcome. Again. This time with gratitude.

“I wept,” he quietly confided.

Then, per instructions, on Dec. 1 he opened the first present. For an avid reader, it was a particularly appropriate choice: the beautifully bound book, “A Hometown Christmas,” filled with Christmas carols, poems, recipes and photographs of the season. Each subsequent gift has been similarly touching and fitting — in every sense of the word. A boxed set of wooden chopsticks and rice scoop. A smart-looking, charcoal-grey sweater appropriately sized for his slender frame. Luxurious cotton pajamas in a bright blue plaid — again, a perfect fit. In fact, the gradually expanding collection seems to naturally fit the tune of “Twelve Days of Christmas”: “Looong under-wear! Thinsu-lated gloves, three dress socks, two-oo bathroom soaps, and a calendar to mark the New Year!”

The obvious care and selection of the items, the thoughtful way in which the presents have been wrapped and tagged, the 25-day extended play of anticipation, surprise, and use during the holiday season (a time that might otherwise have been very emotionally trying) all point to the fact that someone (or group of someones) wanted to show Ishihara that he is not alone. And it worked. Twenty-five times over.

In the First Presbyterian Church bulletin for Sunday, Dec. 7, the following announcement appears:

“Matt Ishihara would like to thank whoever was responsible for reviving his belief in Santa Claus. He was presented 25 gifts for the season that are being opened each day before Christmas. This gift of love is making the season enjoyable for him.”

The present that Ishihara opened on Dec. 13 was a CD — “Silent Night: 25 Carols of Peace and Tranquility.” The last song is “O Little Town of Bethlehem.”

“O Little Town of Yellow Springs!” chuckled Ishihara, as he got up from his chair and headed toward the CD player.