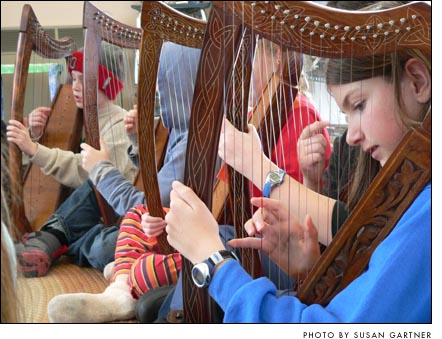 The children sat on a rug in a semicircle around the visiting harpist in the art/science room at The Antioch School, each hugging her or his own child-sized harp, their faces pressed close to the strings. Clunky winter snow boots contrasted with the delicate and detailed carvings on each instrument. The teaching was playful and nurturing, the atmosphere -— harp-warming.

“Unlike many musical instruments, it’s hard to make an ugly sound on a harp,” said artist-in-residence Holly Pratt last Friday during a break in the last day of her one-week residency.

The Holly’s Harps program began in 1990. Since then, over 460,000 students have participated in Pratt’s hands-on workshops and interactive assemblies across the United States as well as Canada, Europe and Japan. Although she teaches basic harp technique so students can quickly maneuver around the instrument, her aim is not to nurture a new generation of harpists, but to help children love music.

“Some of them find the harp interesting but it’s nothing they want to pursue,” she said. “Some find an interest in music that they’ve never been able to manifest before because they’ve never had an instrument in their hands. Only the very rare child is going to go on to study harp.” Basic musical concepts are very teachable on the harp, she continued, “because the whole scale is right in front of you.”

Pratt was only three when she took a liking and a spoon to her mother’s Celtic harp. Living in New York at the time, her parents found an instructor qualified to teach a very young protege and she’s been a professional harpist for most of her working life.

In 1987, Pratt founded the nonprofit organization, Lyrica, based in Cincinnati. Holly’s Harps was created as part of Lyrica’s mission to provide outreach to learners of all ages and abilities. Carting her six-foot-high, 75-pound harp around the world along with 30 smaller harps provides Pratt with a continuous feed of musical mishaps and harp attacks.

“I lost one to a bus,” she said of one casualty since the program’s inception. “The kid had put it down on the walk and the bus came just slightly up over the curb. I was glad it was the harp and not the kid.”

For four days, the heavenly sounds of children plucking around filled the Antioch School as they practiced with pitch and pattern and perfected the glissando. As “harp monitor,” Pratt also taught proper stage etiquette and how to take a professional bow. Their week’s work culminated in a morning “concert” at Friends Care Community and a repeat performance for parents at the school that evening.

“It’s fun to be in schools where I’m supporting an existing music curriculum,” Pratt explained, “but far more frequently these days I go into schools where I’m the only music they’re going to get, which is very sad.” The program’s flexibility can support a history curriculum (using the harp as a portal to explore a particular historical period) or a math and science curriculum where students learn about frequency, vibration, and structure.

A few years ago, after giving a concert with an historical chamber group at Columbia University in New York, Pratt was approached by a young man from the audience.

“He said, ‘You don’t remember me but I came from the poorest school in the poorest county in Kentucky,’” recounted Pratt. As the man went on to describe the particulars, Pratt’s memory went back to the Appalachian school and a kid who was acting out in assembly.

“The teachers were telling him he couldn’t participate in the workshop and I remember telling the teacher, ‘It’s really okay. Let him be in the workshop and if there’s trouble, I’ll deal with it.’” The topic for the day was a physics lesson about the structure of the harp and why the triangle shape is ideal in situations — such as a roof — where significant stress must be accommodated.

“He said he started looking for triangles everywhere and he drove his family and teachers crazy,” Pratt said. “At one point they thought he needed mental health help because he spent a year searching out triangles.”

When he met up with her in New York, he was a physics major at Columbia University.

It’s moments like these that confirm the far reaching effects of Holly’s harps. Unfortunately, in the present economy, programs like hers are in serious jeopardy.

“I see funding for the arts just disappearing,” said Pratt, who saw early warnings of a recession and its devastating toll on the arts and philanthropy. Lyrica survives on donations to help provide programs at little or no cost to the schools that need it most. According to Pratt, those donations have dried up as well as the money from schools and organizations that could traditionally pay for the services outright.

Pratt’s appearance at Antioch School as an artist-in-residence was made possible by the Emily Bailey Fund, developed collaboratively by the school and Rosemary and Jim Bailey to pay tribute to their daughter, a graduate of the school who died of a brain tumor in 2000.

“The children at The Antioch School are curious,” said Pratt. “They know how to investigate, to apply what they’ve learned in one instance to another situation. They problem-solve with abandon and are respectful of different ways of approaching the world. They’re just fun.” The school, she continued, renews her faith in what education can be like. Even so, the harpist is currently pursuing other work to supplement her program.

“If in this economic climate we neglect the arts, we neglect our souls,” she said. “We cannot raise generations of kids with no sense of aesthetics in their lives.”