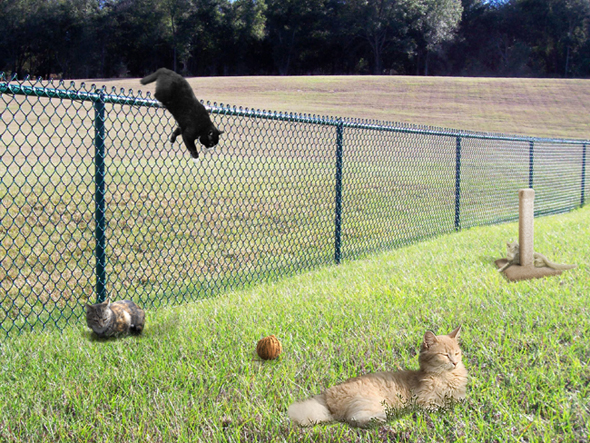 A proposed cat park, similar to the one above in Filene, Ohio, is attracting the attention of Feline Aid Trust, a group committed to shoring up the health of village cats.

At its March 22 meeting, Village Council considered plans for a proposed cat park in Yellow Springs. The idea for a cat park was pitched by a group of villagers concerned with the general health and well-being of the village’s numerous domestic cats, and also upset that dog owners might be getting favorable treatment.

The group, known as the Feline Aid Trust, or FAT, claims that house cats in Yellow Springs are both under-active and overweight. FAT founder and spokesperson Cat Carmichael said, “Kitten-hood obesity is a nationwide epidemic. If we don’t do our part to keep our cats healthy, pretty soon their life expectancy is going to plummet from 15 years to 14-and-a-half.”

The resolution for the park, if passed by Council, would allow construction of a fenced-in area for cats to congregate, convene and, hopefully, get a little exercise. The park would be unique, said FAT committee members, in that it would be fenced in on top, as well.
“Cats, as you might have heard,” said FAT member Karl Kittenman, “are notorious climbers. How else are we supposed to keep them in there?”

At the meeting, Council opened the floor to location suggestions for the proposed park. It was agreed that the park be constructed in a location agreeable to a cat’s natural disposition, and reminiscent of the places cats traditionally tend to loiter. The most popular locations suggested were in an alley between two dumpsters, on the hood of a car, or in the immediate area in which a person is attempting to walk or sit.

The proposal was met with some opposition, however, and many voiced concerns over the safety issues.

“Kids love cats,” said villager Alice Ailurophobicson, “but cats hate kids. They hate everybody. You can see it in their beady, evil little eyes. That cat park is a recipe for disaster.”

“Not to mention the noise,” chimed in Mike Litterpan. “God help us if one of them is in heat.”

Other villagers complained about hygienic ramifications, though it was agreed that at least cats have the decency to bury their own poop.
These protests nearly drowned out quieter concerns raised, including that cats rarely tend to socialize with one another anyway, that they’re often fiercely territorial, and that putting them in a cage together could lead to violence.

Council moved to meet again on the issue in six months, allowing villagers time to dialogue further on their own, to develop their ideas and, if necessary, voice their concerns to their local news outlet.

The village cats themselves have been auspiciously silent on the issue. When approached for comment, they typically nuzzle one’s legs affectionately, before turning and walking away, looking slightly bored.