About half of all Democrats who vote in the party primary don’t vote for the Democratic state central committeeman and committeewoman seats, which are on the ballot every four years. Probably, according to Don Hollister, people avoid that race because they don’t know the candidates nor exactly what the committee does.

But Yellow Spring Democrats have no such excuse on May 4, when they can cast their votes for villagers Hollister and Connie Crockett.

Even though he’s been involved in party politics for 40 years, Hollister has little awareness about what, exactly, the central committee does, and that’s exactly why he’s running. While the committee is legally the formal governing body of the party, Hollister rarely received reports of their meetings. And as the head of the Greene Country Democratic party, that didn’t seem right.

“I believe there’s a need for more transparency and openness,” Hollister said in an interview last week. If elected, he would report on state central committee meetings on a district Web site and “more generally seek ways to stir up attention to what the ODP is doing,” he wrote in a News letter to the editor last week.

A lack of media attention to the state central committee contributes to people’s lack of interest in the group, which means that incumbents rarely lose their seats. Hollister filed to run four years ago but was asked by Democrats at the state level to not challenge Farrell. He agreed to step back, Hollister said, as long as the central committee began publicizing its activities. That did not happen, so now he’s back in the race.

While he doesn’t think anything nefarious is going on in Democratic politics at the state level, “it’s a world of secrecy and quiet deals,” he said, and he wants to change that.

Hollister came by his interest in politics naturally. His father, Barry Hollister, was a longtime professor of political science at Antioch College who was also involved in local politics, including authoring the Village Charter. As a young man, Hollister spent several months as the caretaker of the 93-year-old former Antioch College President Arthur Morgan, who was, according to Hollister, still as mentally acute as ever. From Morgan, Hollister heard stories of  the older man’s dealings with FDR when Morgan was a member of FDR’s cabinet.

Hollister’s involvement in politics began about that time, and has moved through a variety of campaigns, including his own unsuccessful race for U.S. Congress in 1980. On and off for the past 30 years, he’s been a member of the Greene County Democratic Executive Committee. As a committee member, Hollister also serves on the Greene County Board of Elections. 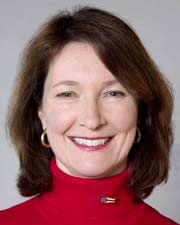 Crockett comes to the central committee race from a different path, although one still marked by party activism. She ran unsuccessfully for State Representative in 2006 and 2008, both times turning in respectable showings in the strongly Republican 10th district.

As a former candidate, Crockett believes she knows well how the state central committee might function better to support candidates, and to “cross-pollinate” the county party organizations.

“I believe that coordinating their efforts a little better would strengthen the party,” she said in an interview this week. “I also feel I’ve learned the different strengths and weaknesses of each area regarding electing Democrats.”

Crockett, a program officer at the Kettering Foundation in Dayton, believes a stronger Democratic party statewide could have more influence on factors that work against the party in Ohio, including the gerrymandering that strongly favors Republicans.

Crockett became involved with Democrats at a young age because, she said, she perceived that they were “a group trying to help people.” She still sees that in the work of President Obama, and wants to be a part of helping him to be re-elected.

“There’s no perfect party, but I buy into the ideals of this one,” she said.