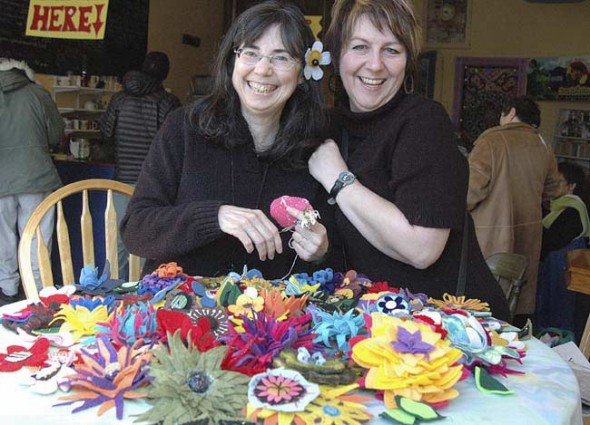 About 17 women and one man showed up at Brother Bear’s last Friday morning to take part in the latest project by JafaGirls Nancy Mellon, left, and Corrine Bayraktaroglu. The multi-media artists have organized a new project to decorate Dayton and Corry Streets with handmade flowers, shown above, which were created with felt, buttons and beads. Everyone is invited to join in Friday mornings at 9. The flowers will begin appearing on benches and poles in the next few weeks.

In time for spring, an artistic blooming on Dayton Street

“Flower power” will take on new meaning soon in Yellow Springs, as colorful blossoms spring to life on benches and poles on Dayton and Corry Streets, just in time for the greening of spring. It’s the latest project from Corrine Bayraktaroglu and Nancy Mellon, also known as the JafaGirls, and as usual the two local artists seek to create an experience that combines both art and community.
“It’s about making people smile and connect with each other,” Bayraktaroglu said in an interview last week.

There are several ways that the project brings people together, the women said. First, anyone interested may help make the flowers each Friday morning at 9 a.m. at Brother Bear’s, and last week’s lively gathering of about 17 women and one man indicated that the project has struck a chord.

“It’s a bunch of crazy women making felt flowers and it doesn’t get much better than that,” said Carol Allin, who had been “chatted up” about the project that morning by Bayraktaroglu on Facebook, which is one way people are getting involved. Another way is word of mouth, and still another is simply discovering the event while seeking morning caffeine, as happened to Ellie Leech last week.

“I showed up this morning for coffee and stumbled on this,” she said, while happily stitching her flowers. “It’s great to have a creative outlet.”

Participants don’t have to be experienced knitters, or seamstresses. They just need to have an urge to stitch together the colorful pieces of felt that the JafaGirls supply, along with beads, buttons and other notions. It’s been gratifying that so far women of all ages have taken part, Mellon said, along with one man, artist Pierre Nagley, who has been honorarily named the “Jafa Lad.”

As well as coming together during the creative process, people will come together when the project is put up, Mellon said. This aspect of the public art — people stopping on the sidewalk to talk while the artists hang up their work — is what hooked the artists when, two years ago, they created the Knit Knot Tree in front of the Emporium, covering a Xenia Avenue tree with colorful knitting. In the process, they had many spontaneous conversations with strangers.

“What we fell in love with really was being outside and doing something that prompted people to come up and talk to us,” Mellon said.

That project was followed by the “yarn bombing” of many Dayton and Corry Street poles last year. While the artists drew in a few local helpers for that project, they didn’t have nearly the response that they’re having this time.

“It’s not ours anymore,” Mellon said, surveying the large group of sewing and chatting women who showed up at Brother Bear’s last week. “It’s the community’s.”

Bayraktaroglu and Mellon also hope that this public art project helps to build community by giving folks who walk by something to talk about with each other. And yes, they hope to see an increase in Yellow Springs “bench therapy.”

“You know, that’s when people sit on the bench and pass a bag of chips back and forth and just watch the world go by,” Mellon said.

Last week, Bayraktaroglu and Mellon proudly upended on a table a bag holding the felt flowers created so far. An explosion of color streamed out — reds and yellows, greens and blues, big flowers and small ones, fantasy flowers, realistic flowers, beaded and buttoned ones, too. It takes a lot of flowers to decorate a pole, they said, but they’re getting there. The women will begin adorning Dayton and Corry Streets with the felt flowers in upcoming weeks.

In the meantime, anyone interested is invited to join the creative and community event at Brother Bear’s at 9 a.m. Friday mornings.
Contact: dchiddister@ysnews.com