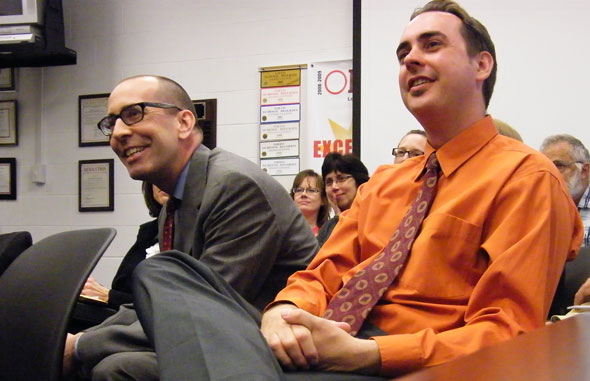 At the April 8 Board of Education meeting, Interim Superintendent Tony Armocida said he is pleased to have the opportunity to recommend to the board two strong candidates, Tim Krier and Matt Housh, for approval for the positions of principals of YSHS/McKinney and Mills Lawn School, respectively, suggesting that each candidate possesses strengths that the district requires as well as traits that the community desires.

Krier, who garnered 14 of the 15 student nominations during his interview and vetting process, will relocate from Upper Arlington to the village with his wife, Kim, son Noah (who will be in grade four next year), and daughter Marion (who will be in grade 2 next year). Krier has functioned in multiple administrative capacities, has broad experience in technology in education, and has consulted for the Ohio Department of Education in adolescent literacy.

Retiring Principal John Gudgel said he knew Krier was the one when he “took Tim up to the third floor” to meet 15 students who were eagerly waiting to question him. “Any candidate that can pass the scrutiny of 15 students is worthy,” he said, and Armocida added that he is student-centered, bright and enthusiastic, and comes to the district with the highest of recommendations.

Housh, who lives in the village his wife Deb and his son Tyson, has a background in special education administration and a history of building relationships with village youth. Currently principal of Valley Forge Elementary in Huber Heights, Housh was the top candidate from 40 applicants, Armocida said, and has “tremendous references.”

“I think I told you guys … that you want someone whose secretary was going to grab their leg before they leave the building because they love them so much,” Armocida said. “And literally, I think that happened.”

More information on the new hires can be found in this week’s April 8 print edition of the Yellow Springs News.

In addition to hiring the new principals, the board also announced a finalist candidate for the district’s Superintendent position. Mario Basora, the third candidate to present to the community this week, was chosen as the finalist. The board will conduct a site visit in the coming weeks, and expects to vote on the position in May. Further coverage of the new principals — and other business handled at the April 8 Board of Education meeting — will be included in next week’s News.
[audio:https://ysnews.com/audio/mario_basora.mp3%5D