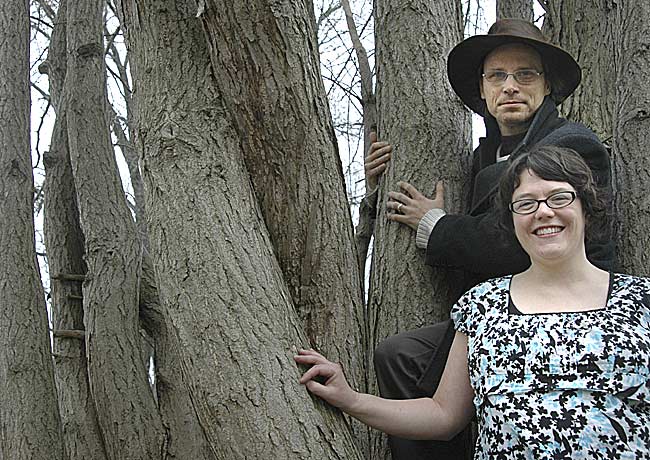 Eric Wolf is one of the eight professional storytellers who will tell tales that honor the land this Saturday, April 10, at 7:30 p.m. at the Coretta Scott King Center on the Antioch College campus. Also pictured is Michele Burns, associate director of the Tecumseh Land Trust, which is sponsoring the event as part of its 20th anniversary celebration. Donations of $10 per family are requested, and children are invited to wear their pajamas.

Telling stories to save the land

Eric Wolf remembers the moment he made an emotional commitment to supporting farmland preservation. He had returned to Shelter Island outside New York City, the place where as a child he went to hunt scallops and wonder at the expanse of cornfields. But when he returned as an adult, the farmland had turned into suburban plots, and the red tide caused by pollutants had killed the scallops.

Wolf will tell a story about this event on Saturday, April 10, during a performance that begins at 7:30 p.m. at the Coretta Scott King Center on the Antioch College campus. The performance, which features eight leading environmental storytellers who are attending the weekend Eco-Storytellers Retreat, is a fund-raiser for Tecumseh Land Trust, the local farmland preservation organization. Local storytellers Harold and Jonatha Wright will also be featured.

The fundraiser is priced at $10 per family, although those who can’t afford that amount may pay what they can. Organizers say if the weather is good the event will be held outside. Children are encouraged to come in their pajamas with a warm blanket, with TLT supplying the bedtime stories and snacks.

People have a misconception about storytellers, Wolf said in an interview this week, with many believing that at a storytelling event people sit around and listen to someone reading a book. Not so, he said. Rather, serious storytellers deliver professional performances that draw from their original experiences and observations.

“These storytellers are seasoned performers who can speak in both emotional and visual language to children and adults,” Wolf said.

Storytelling is a way to find the emotional resonance in issues that sometimes seem overwhelming, such as protecting the environment, according to Wolf. In doing so, participants can move from an intellectual understanding to a desire to take action.

“Hearing a story can be a way of coming to a place of commitment,” Wolf said.

Known professionally as Brother Wolf, Eric Wolf has been a professional storyteller for 15 years. He’s the host of the online podcast “The Art of Storytelling,” the creator of the collection “Fairy Tales Forever,” and has told stories at the Smithsonian in Washington, D.C., and the American Museum of Natural History in New York City.

Michele Burns also remembers the moment that she made a commitment to live a life aimed at preserving the environment. She and her husband, John, had had their first child and were working in their newly-created garden on the land of John’s grandparents, the DeWines, whose home Michele and her family now occupy. As her daughter toddled around in the garden, she knew clearly that she wanted to feed her family fresh, healthy food, and to work toward helping others reach that goal.

Now the associate director of Tecumseh Land Trust, Burns is also an organic farmer who operates the Flying Mouse Farm out of her home.
The storytelling event dovetails nicely with TLT’s 20th anniversary this year, during which the group is sponsoring a series of events around a theme of environmental awareness. Especially, TLT hopes to broaden its audience and reach out to new constituencies.

Burns and Wolf both hope that this Saturday’s event helps Tecumseh Land Trust move toward that goal. The topic is one critical to everyone, Wolf said, stating that when someone tells him they’re not interested in the environment, he responds by asking, “Which don’t you care about, eating, drinking or breathing?”

For more information, contact Tecumseh Land Trust at 767-9490 or go online at http://www.tecumsehlandtrust.org.