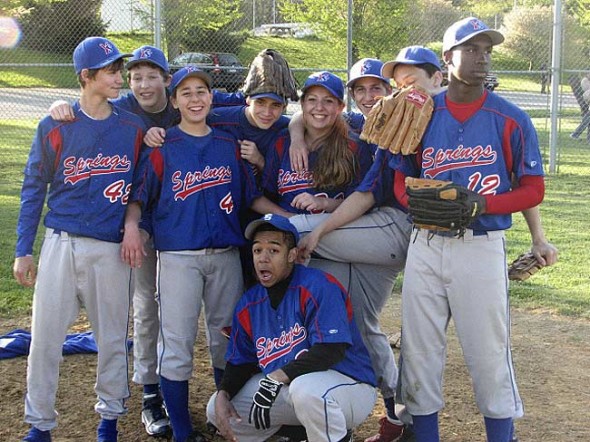 Two sisters, Alex and Adrianne Beer, are playing baseball for Yellow Springs High School this season. Alex, a junior, and Adrianne, a freshman, are taking the field for the Bulldogs because there was not enough student interest to form a softball team. The girls would rather play softball, but enjoy playing baseball because they are happy to be playing anything at all.

“I really like playing sports,” Adrianne said. “It’s really great to have a team to play with.”

“My favorite part is just getting to play,” Alex said. “It’s really fun to play with other people who want to play.”

In a traditionally male-dominated game, the Beers are fitting in with the help of their teammates, who treat the pair like “a couple of the guys,” according to Alex. “They talk about the same stuff they would talk about if we weren’t there,” Adrianne said. “I think it’s better than them acting like they can’t say anything in front of us.”

The Bulldogs’ opponents are generally respectful and offer up advice when the girls get on base. There are some that offer unfriendly comments, but that doesn’t irritate the girls, who get a kick out the positive experiences.

“I’ve been surprised by the guys’ attitudes,” Alex said. “Maybe [I’m frustrated] with the way I play, but I’m not frustrated with [any negative comments].”

While the girls wish their statistics were better, Coach Ted Donnell knows they are improving.

“It’s hard coming from softball and going to baseball,” he said. “Everything is quicker. The way you hit the ball is completely different.”

Alex, a second baseman, is batting around .200 for the season. Adrianne, a right fielder, said she’s doing a better job of getting the bat on the ball, but had only gotten on base a few times this season in limited action.

The younger Beer sister doesn’t get a lot of playing time because Donnell doesn’t typically play freshmen, according to Adrianne. Alex plays as an upper-classman should. The elder Beer can be found shouting out directions to the rest of the team during the game from her second-base position, an attitude that doesn’t surprise Donnell.

“Alex has great command of second base,” he said. “Being a leader is the nature of the position. Alex isn’t afraid. She has the confidence.”

To those who know the sisters, it shouldn’t be a big surprise they are on the team. The duo played baseball as youngsters and started playing in softball leagues outside the village as they got older. Alex was even able to play softball for the high school team during her freshman year. It’s something she hopes younger girls will be able to do when they reach high school.

“I wish [Yellow Springs] had been developing a program because I wish I could play high school softball,” she said. “As much as I love playing baseball, I take softball pretty seriously. I like being able to play with other girls who enjoy playing as much as I do.”

Looking out for future softball players is important to Alex because she looked up to high school athletes when she was growing up. Now she has a message for girls who look up to her.

“I would encourage girls to play,” she said. “Even though we don’t have a softball team, they should play baseball or go out of town to play softball.”

Alex is already responsible for one person playing, the sister with whom she shares a room.

“Alex always got me into a sport,” Adrianne said. “If she played it, I would end up playing it.”

The Bulldogs (0-15), play their final game of the season on Thursday, May 6. It could be the last time the Beers suit up together for the Bulldogs. While she’s not 100 percent certain, Adrianne may transfer to Xenia High School next season, where she would have a chance to play softball. Alex will be on the Bulldogs’ baseball squad for her senior season.

“I just love playing baseball and I plan on playing next year,” she said. “I’m excited to play.”