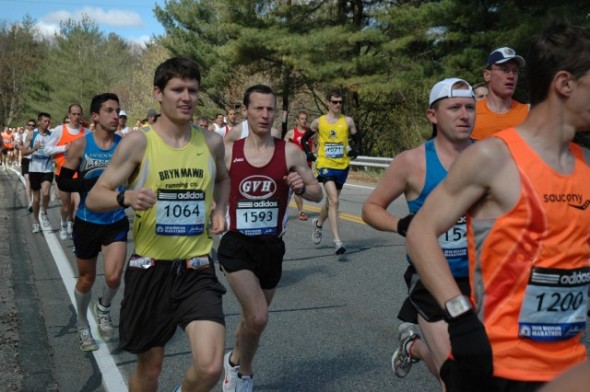 Grant Scott, a 2002 graduate of Yellow Springs High School, finished in 65th place at the Boston Marathon on April 19 with a time of 2 hours, 29 minutes, 5 seconds. Over 23,000 entrants participated in the race, which is considered one of the premier distance running events in the country.

Scott, who ran cross country and track in high school, was hoping to place in the top 100, he said in a recent interview.

“Going into a race you have some idea of where you would like to finish,” he said via email. “With a race like Boston where people have to qualify, you have an idea of where other racers are likely [to finish].”

Scott added that while he may have a goal for himself, reaching that feat is another story.

“A marathon is long enough that even feeling great and being on pace at twenty miles is no guarantee that you won’t be walking six miles later,” he said.

Scott’s’ mother, Jane, who attended the race with his father, Bob, was surprised to see her son place so well among such an elite field of competition, but enjoyed every second of the race.

“It was wonderful to watch him and participate in the crowd,” she said..

Besides running in high school, Scott ran track and cross country for Haverford College, a Division III school in Philadelphia. The current University of Cincinnati medical school student attributed his strong finish to spending a lot of time running around the Queen City.

Before training for the event, Scott was already running 60 to 70 miles a week. About 18 weeks before the race, he started a training regimen that consisted of running 80 to 90 miles a week As the marathon approached, he slowed down his routine and ran only five to six miles a day so he would feel fresh for the race.

During the marathon, Scott said he was aided by two of his former college track teammates, who set a pace for him, which helped him get into a rhythm.

Scott, 26, wasn’t sure when his next race would be, but suspects it could be soon.

“My running partner here in Cincinnati is already talking about running the Columbus Marathon in the fall, so I suspect I’ll be out training again soon,” he said.